They are called  The Greatest for a reason.  In the midst of the circus called "the government shutdown", a group of Honor Flight veterans from WWII arrived in Washington, D.C. to visit their memorial.  The World War II Memorial honors the 16 million who served in the armed forces of the U.S., the more than 400,000 who died, and all who supported the war effort from home.  It undoubtedly symbolizes the defining event in the 20th Century American experience. 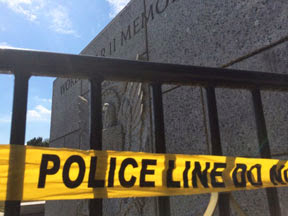 A group of nearly 100 veterans, many of them in wheelchairs, had left their homes on the Mississippi Gulf Coast in anticipation of their visit to this Memorial that honored them.  They knew that  the itinerary for their trip would be in limbo yesterday as national lawmakers failed to meet a midnight deadline to reach a government spending bill agreement.  The National Park Service had said it would close all national parks and possibly even barricade all of the open-air memorials the veterans were slated to visit yesterday in Washington.
But Mississippi Representative Steve Palazzo intervened and sent a letter to the President, asking him to not restrict access to World War II veterans traveling to Washington as part of Honor Flight visits this week.
"There is no absolutely no justification for shutting out our veterans from their Memorial," Palazzo said. "This is an open-air memorial that the public has 24/7 access to under normal circumstances --- even when Park Service personnel aren't present. It actually requires more effort and expense to shut out these veterans from their Memorial than it would to simply let them through."
So what happened?  Apparently, the government shutdown leaves no one to open the White house mail, because the veterans were greeted with police warning tape; designed as a barricade to keep them out.  But the spirit and determination that saw them storm the beaches of Normandy and fight their way across Europe and the Pacific, has not faded with time.  World War II veterans on Tuesday broke down the barricades blocking access to the Memorial and were soon joined by several members of Congress. 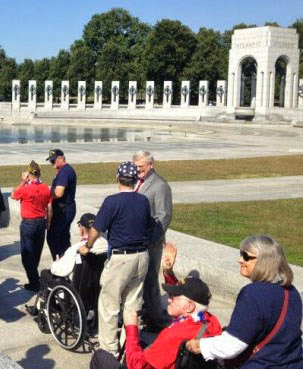 Leo Shane, a reporter for Stars and Stripes, the U.S. military's independent news source, was on the scene and tweeted “Honor flight vets just knocked over the barriers at the WWII memorial to get inside, #shutdown or no.” and reporting “tons of applause as the WWII vets from Mississippi storm their memorial. Park police on the way.”  Shane continued with his live tweetfeed:  "Credit where due — I watched Representative Steve King distract a park police officer while vets and staffers knocked down the fences here.”  And Representative King wasn't alone.  House Representatives Louie Gohmert, Michele Bachmann, Bill Huizenga and Roger Wicker were seen among the crowd, helping and congratulating the veterans for their boldness.  Apparently, there is still some integrity left in D.C.
Shane's article recorded just how the veterans felt as they toured their memorial.  “We didn’t come this far not to get in,” one veteran proclaimed.  “It’s great to be here, but it’s really disappointing that we can’t get closer to see it,” said Gene Tolley, a Marine Corps veteran who served in the Pacific during the war. “I came through the city back in high school, but I was looking forward to coming back and seeing this.”  “This just means so much to me,” said Alex “Lou” Pitalo, an Army vet who also served in the Pacific during WWII. “I waited 70 years to get a welcome like this. And to get to see this and to have all those people clapping … I’m just so happy. This was amazing.”
But, as always, don't expect the government to be so compliant the next time.  Officials from the Honor Flight network, which organized the tour, said they have advised upcoming trip planners that the memorials will not be open to the public, and to plan accordingly.  In fact, National Park Service spokeswoman Carol Johnson said there is no risk of anyone getting arrested at this time, and they are seeking guidance on how to proceed.
From my perspective, it's such a shame that the selfish games being played in D.C. would be used to keep the very men who fought to maintain our freedoms from enjoying one last memory of their unselfish service.  To these persistent veterans, I say this:  Thank you for showing us, once again, the courage of your convictions.  You remain a shining example of America's finest.  God Bless You all!

UPDATE:  Apparently, today the Lincoln Memorial was declared off-limits to these same WWII vets. The question is this:  why is so much time and money being spent to close off access to something that is normally open?  What is the message being sent to the American people?
And in a related story, an Honor Flight from Northwest Ohio is scheduled to visit their memorial next week, but was told by a representative of the Parks Service, that veterans would face arrest if they chose to try to gain access to their War memorial.  When questioned if they would actually arrest 90 year-old veterans and keep them from seeing the memorial that was erected in their honor, the answer was "That's correct, sir."  What have we become?!  I am glad my dad is not here to see the injustice and the disrespect.

For a more in-depth article on this fine organization called Honor Flight, read this post.

Galatians 5:13    "For you were called to freedom, brothers. Only do not use your freedom as an opportunity for the flesh, but through love serve one another. "