Are You Paying Attention?

During my two-week hiatus, our travels took us in the vicinity of the devastating floods in Colorado.  In fact, it took quite some maneuvering to out-run the flooding that was occurring throughout most of Eastern Colorado, all along the South Platte River.  We finally crossed over at the small town of Julesburg, along the Colorado/Nebraska state line.
The river had crested the night before, and we were able to safely cross the next morning.  But evidence of the high-rising waters was everywhere and the low-lying lands were nearly 10 feet under water.  I can only imagine what it must have been like at the source of all this downstream water; the news reports told of the destruction in the Denver/Boulder area. 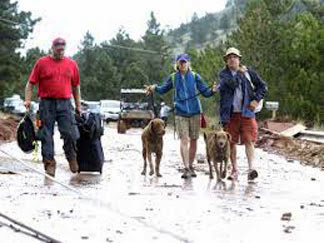 The topographical damage was obvious.  But what also caught my attention was the local news we heard from our car radio.  Towns in the path of the flooding were declaring "no flush" policies, and announcing that public toilets had been set up in various locations for the local citizens.  If you were lucky enough to have electrical or water services, authorities were recommending that all water be boiled before use.  Soup kitchens, emergency food supplies, blankets, clothing, and a place to sleep were available for those who found themselves without shelter or a way to cook.  Promises of a return to normalcy were being predicted as months or even a year away.
That really got me to thinking.  Here we are facing a government shutdown, which could potentially mean no social security checks, no government pensions, no food stamps, and reduced federal funding for almost every aspect of societal living.  And even if it lasts for only a few days, you know that people will be complaining and panicking.  What would happen to our society if something as devastating as the Colorado floods (or worse!) happens for an extended time, with no end in sight?  Will people be able to cope and adjust?  Are they prepared mentally, physically and spiritually to such a drastic change in their living conditions?
I have no way of knowing if any of the people effected in Colorado had contingency plans for such an event.  I heard occasional stories of those who were prepared to adapt to their new reality.  They would do just fine on their own, thank you!  But I wonder if this catastrophic experience caused Americans in other parts of the country to assess their personal readiness and state of preparedness.  Did it cause them to stop and think how they would manage to survive if faced with an event that changed their lives so drastically?  If they didn't have a moment in which they assessed their own state of preparedness, then I suggest that they will be perfect little fans of the Federal Emergency Management system.  Which leads me to my next observation.
After safely crossing the flooded Colorado landscape, we continued on our scenic drive towards the mountains of the West.  This trip we stayed off the big interstate highways, preferring the two-lane "backroads" and seeing the small towns that make up the heartland of America.  To our surprise, we passed more than one military Humvee in Nebraska with .50 calibre machine guns mounted in  the turrets.  They all seemed to be headed towards the devastation in Colorado.  What was their purpose?  To help in the clean-up? To discourage looting?
I've seen Hummers with such weapons on trains or transport trucks headed to war in a foreign land.  But driving around on the streets of America?!  What could possibly be the grounds for this action?  Just give me one rational reason!  And did anyone else who saw this anomaly question it as unusual or odd?  But Texas isn't immune ... I'm sure you have run across the news report of the Dallas Police Department taking possession of their own $600,000 military vehicle that was built "to withstand arms fire, mine blasts, IEDs, and other emerging threats."  Does anyone else find this alarming?
I am not smart enough to suggest what any of this means.  As my blog subtitle suggests, I am just offering you a woman's perspective of the times we live in.  And asking this post's title question .... Are you paying attention?