Could They Be Any More Transparent?

This whole charade called "government shutdown" would be laughable if it wasn't so pathetic. With the U.S. national debt continuing to increase by $1.86 billion per day, I think we would all agree that there are areas that could be cut during this shutdown, and no one would ever notice.  That statement becomes even more significant when you realize that in the first two days of the shutdown, the government spent $63 Billion, raised revenue (through taxes) of $26 Billion, and borrowed $1.6 Billion.  Any fool can see that the spending has to be curtailed!
According to the Heritage Foundation, who is an admittedly conservative think tank, and who happens to promote public policies that I hold dear to my heart --- free enterprise, limited government, individual freedom, traditional American values, and a strong national defense --- we would be astounded at the examples of waste within our government.
If our leaders in Washington were seriously concerned about not harming the American people during this powering down of D.C., there are plenty of places they could start trimming the fat.  For instance, did you know that Washington spends $25 billion annually maintaining unused or vacant federal properties?  Why not put those properties on the market and make some money for the American people, instead of closing the WWII Memorial, which is very obviously being used and appreciated by the last remaining members of the Greatest Generation? 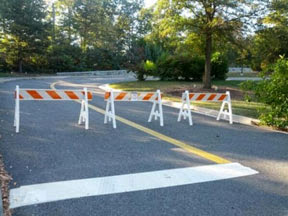 Here's another area in which this government shutdown could absorb some waste: Government auditors spent the past five years examining all federal programs and found that 22 percent of them -- costing taxpayers a total of $123 billion annually -- fail to show any positive impact on the populations they serve.  In other words, these are programs that have no value to Americans, yet we are taxed to pay for them.  So can someone tell me why the Feds would instead choose to shut down national parks that benefit tourists and small businesses that cater to the millions of Americans that visit the Parks?
Here's one that really makes a lot of sense:  Washington will spend $2.6 million training Chinese prostitutes to drink more responsibly on the job.  We can't possibly cut that expenditure, right?  Instead, let's spend more money and manpower than usual in barricading the parking lot to George Washington's plantation, Mount Vernon, which the federal government doesn't even own.  It is privately owned!
As if that is not enough to make your blood boil, Federal agencies are delinquent on nearly 20 percent of employee travel charge cards, costing taxpayers hundreds of millions of dollars annually.  And over half of all farm subsidies go to commercial farms, which report average household incomes of $200,000.  (I personally know this to be true.  A former landlord bragged about the "free money" he received from the government to play farmer).
Instead of cutting the waste and fraud that is evident in these examples, and rendering this government shutdown benign at the least, and beneficial to the taxpayers at best, the game that Washington is playing is quite obvious.  They are thumbing their noses at the American public, taking away those things that bring us enjoyment and pride.  Do you find it conspicuous that it is the memorials and monuments that honor our Founding Fathers that are being denied to the public?  And isn't it funny that the National parks that supposedly belong to "the people of America" are being declared off-limits?  If you still need convincing, there is a report in which one angry Park Service ranger states, "We have been told to make life as difficult for people as we can. It’s disgusting."
I just wonder how many people are fooled by these political games?  Do the politicians really think they are convincing us?  "Nonessential" federal employees have basically been given a paid vacation until the inevitable "open for business" sign goes back up in Washington.  The plan is to make us hurt and thereby convince us that all the nonsense that goes on in D.C. is worth all of our hard-earned tax dollars.  But I have a feeling that millions of Americans are seeing this farce for what it is ... a mockery of our worth as citizens and further proof that government should be limited in controlling our lives.

Proverbs 22:26-27    "Be not one of those who give pledges, who put up security for debts. If you have nothing with which to pay, why should your bed be taken from under you?"