It's Still A Threat!

I received an email from a faithful reader that had my head spinning!  The email linked to an article on a website called National Report, and stated that the city council of Dearborn, Michigan voted 4-3 to became the first US city to officially implement all aspects of Sharia Law.  The article went on to say that the tough new law, slated to go into effect January 1st, addresses secular law including crime, politics and economics as well as personal matters such as sexual intercourse, fasting, prayer, diet and hygiene. WHAT?!?!?!
Now, before your head explodes, let me make it very clear that National Report is a satirical website and the story is not true.  Of course, the authors of the article accomplished what they were after; namely 90,000 shares on Facebook.  And you can imagine that the joke didn't go over too well with the Mayor of Dearborn:  "“Dearborn has never been, nor ever will be, under sharia law. We are governed by the U.S. Constitution, the Constitution of the State of Michigan and the City of Dearborn Charter.” 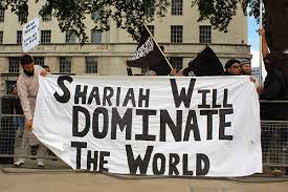 That being said, it doesn't mean that we shouldn't take this opportunity to have a very important conversation.  And it doesn't mean that we should dismiss the very real threat that this doctrine presents to our country.  In fact, there was a kernel of truth hidden in the false article.  In 2010, there was a study produced by the Center for Security Policy (CSP) titled “Sharia: The Threat to America“, a 352-page book based on authoritative sources of Islamic law.  The report, which you can access online, states that while sharia does actually include strict rules for prayer and fasting, it is also an all-encompassing legal and political code that covers all aspects of life including those that have nothing to do with religion.
Proponents of sharia law will tell you that it will result in a more moral society. In reality it is so much more than a social ideology; it is a harsh legal-political-military doctrine that is a major threat to our Constitutional freedoms.  And in our politically correct world, there will be many who will advocate co-existence, accommodation and submission to this transparently un-American, and I will say it.... it is not about God; any god.  Unlike American faith, which preaches mutual toleration and respect for others, Sharia law is totalitarian and repressive.
And make no mistake about it, there is a growing lobby for sharia law in this country.  And that's what has me asking a series of questions:  Have we lost our understanding of the founding principles?  Are we so confused about what it means to be free?  We must realize that shariah is fundamentally about power, namely the enforcement of a body of law, not faith!  It is the intention of sharia supporters to conduct a global campaign to replace non-Muslim governments with Islamic states governed by Islamic law.  It must be seen as an illegal effort to supplant our Constitution with another legal code, not a religious practice protected by that document.  It is not freedom of religion!
So now we must follow up those questions with more:  As a nation, are we going to remain compliant with our own destruction?  Do we have the will to see this threat for what it really is, or will we allow the PC police to convince us it is a harmless religious creed?  Our future -- our very near future -- depends on how we answer those questions.  Can we make use of this satirical and false article to do some real research and soul-searching?   We need to face this challenge head on --- before it's too late!

Proverbs 25:26      "Like a muddied spring or a polluted fountain is a righteous man who gives way before the wicked."