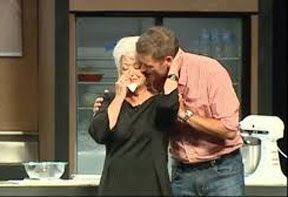 I know I'm commenting late on this newsworthy item, but I think it is always timely to celebrate redemption, don't you?  So I just want to make a quick comment on Paula Deen's "comeback."
Houston, Texas is known for its elaborate trade shows.  We know how to do it up right in Texas, especially when it comes to electronics, fashion, and entertainment exhibitions.  But when it comes to food, Houston's star shines as bright as any other cosmopolitan mega-city.  In fact, Houston is known for its abundance of good restaurants; eating out is a style of life among Houstonians and PLW and I took advantage of the delectable choices when we lived there.
So, it's no surprise that Paula Deen chose Houston's Metropolitan Cooking & Entertaining Show for her first appearance after the discrimination case against her was dismissed.  But the response of the crowd may have surprised even the Diva of Southern Dining.  Tears streamed down her face as the crowd stood for a 10-minute standing ovation.  Quite a statement!
Her decades-old use of a derogatory racial slang term cost her everything in her public life --- her TV show, a cookbook deal, millions of dollars in endorsements.  Perhaps her stereotypical Southern accent and less-than-elitist style set her up as the perfect tool to slam us conservative, unsophisticated, and therefore obviously unenlightened social boobs.  Surely she was representative of all of us country bumpkins who live south of the Mason-Dixon line; we are all rascist, prejudiced, and hopelessly bigoted, right?
Well, I think this whole incident has shown the Elites that they may not know the American people as well as they think.  I predict that Paula Deen will be back, and she will be bigger than ever.  America loves a redeemed reject; especially when they can identify with her.  I will go out on a limb here ... Every person of every color, gender and ethnicity have used a less-than-complimentary term when describing someone different than themselves.  Is it something we should be proud of?  Absolutely not! Should we be called to account? Yes!  Mankind is never exalted when we belittle each other's differences, instead of dignifying them.
Has Paula Deen learned from her mistake?  Time will tell.  Do we make a radical change when we are caught red-handed? Be honest!  We would like to think that we grow in our sensitivity and thoughtfulness as we expand our experiences, but we all make heartless and inconsiderate remarks.  We are human.  But what adds to our shared humanness is the wisdom that comes from falling and being given a second chance.  Perhaps Paula Deen will not take her success or her platform for granted any longer.  Perhaps she can be an example for people of all races and persuasions to look beyond the outward blunders and seek to find the common ground.  Now that would be cause to really celebrate!

Ephesians 4:32    "Be kind to one another, tenderhearted, forgiving one another, as God in Christ forgave you."
Posted by Pam Kohler at 7:00 AM