We continue with our discussion on our American character and values.  Thanks for tuning in while I take a much-needed breather and mini-vacation.  I look forward to your comments!

Diligence:  Careful and persistent work or effort; continuing firmly or obstinately in a course of action in spite of difficulty or opposition.

This comparison is almost a contrast in the "before" and "after" of our American character.  Diligence was arguably a distinctive feature of preceding generations.  From the Pilgrims landing on Plymouth Rock to our parents and grandparents experience in the Great Depression and WWII, we can point to their continued hard work "in spite of difficulty or opposition."  I'm sure each of us have a story of an ancestor who overcame the odds to make a better life for himself.  Their efforts weren't about acquiring material wealth as much as it was about feeling good about putting in an honest day's work for an honest dollar.  (Note the emphasis on "honest").

Can't get much more succinct than that, right?  Oh, sure, there have always been people who did less than they were capable of, but when a majority of the over 4 million people on welfare, and a surplus of the 47,000,000 on foods stamps are either caught in the system, or have been trained to see it as normal .... then, my friends, we have a slothful society.  And that's not even considering the younger generation who expects to have the million dollar house, the fancy car and a six-figure salary right out of college --- without paying their dues.  And they are the ones who have some initiative! 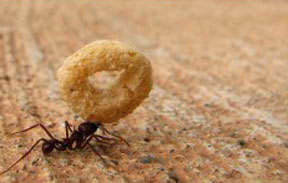 So how do we get rid of this apathetic attitude and instill a tireless, persevering, and industrious mindset back into our national character?  God made us so that we would find satisfaction in utilizing all our energy to accomplish the tasks set before us.
I don't want to think that we are going to have to do a "reset"; that we're going to have to lose it all to regain the respect of working for it again.  I know it's been said before, but each successive generation of Americans wanted to give their kids more than they had.  And perhaps this approach did them no favors.  Through our advances in technology, electronics and machinery, we don't have to exercise our brains, our hands or our bodies like we did in the past.  In effect, we have taken away the need to work as hard, and look what we have sown.  It's time to re-learn the rewards of our sweat and our labor.  Only then can America climb out of this culture of entitlement and sloth.