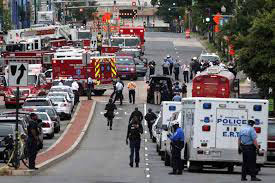 Here we go again!  My mind is full of jumbled thoughts ... the deaths at the Navy Yard are another in a long line of recent tragedies that America has faced.  And once again the facts are not clear, which allows for all kinds of speculation and conspiracy ideas to take root.
We hear comments like "It is clear at this point, that terrorism is not involved" ... "Multiple shooters a possibility" ... "Disgruntled former employee?" ... "How did he gain access?"  At this point, it is anyone's guess as to the veracity of these statements, or the relevance of the questions.  And guess is the operative word here.  So that's why I would appreciate the news media limiting their frenzied news coverage until the facts are determined.
I would ask them to please not jump to conclusions about who the assailant is (or isn't), his motives, or how he accomplished this horrific deed.  I would also ask that different groups be careful about offering their theories ... which can be a deceptive manner in which to suggest and drive motives that might not be accurate.  In other words, we have arrived at a sad place in our history, where deception can be easily manipulated to look like the truth.
I wish we could return to the time when TRUST in our officials was paramount, instead of SUSPICION.  I hate it that I question every statement and news conference, looking for hints of false narratives.  It makes us lose sight of the lives that were lost; almost desensitizing us to the fact that we have witnessed Evil, which doesn't really care about motive, methods or misrepresentations.  Evil just wants to chalk up another victory.
And when the sides start trying to outplay each other, looking for ways to use this tragedy to their benefit, then we all lose.  The families of the victims lose -- the story becomes more about the reaction to the event, than grieving the dead and injured.  Law Enforcement, Investigative agencies, and Politicians lose -- either their reluctance to tell us the truth, or their rush to give unverified facts raises the doubt quotient. Consistency has been lacking of late.  And perhaps saddest of all, our nation loses --- These incidents are used to separate and isolate us from each other.  We start viewing each other with  mistrust and categorizing each other, based on preconceptions (and often misconceptions) of each others' ideals.  Our individual humanity becomes lost in labels.
The truth is that anytime Evil uses one human to destroy another, we should mourn.  It is another picture of our separation from God.  To let it be manipulated beyond its genuine significance is to elevate Evil's objective above God's purpose.
I'm sure that in the coming days we will see many "experts" give us their excessively inflated opinions as to the "whys" and "hows." And they will generate thoughts as to "what does this mean" and "how do we prevent it in the future"?  That's what worries me.  Whatever the official line turns out to be, it would be nice if it corresponded to reality.  All I keep thinking is, "Thy will be done."

Email ThisBlogThis!Share to TwitterShare to FacebookShare to Pinterest
Labels: Tragedy