The Barna Group is a visionary research and resource company located in Ventura, California. Started in 1984, the firm is widely considered to be a leading research organization focused on the intersection of faith and culture.  So it was with considerable interest that I pondered their latest survey that explored how Americans have responded to not only the singular event of our lives (9/11), but more recent events that have changed not only our national culture but also our national consciousness.
As we approach the 12th anniversary of that tragic day in New York City, and the first anniversary of Benghazi (a new 9/11 milestone), Americans are reminded once again that violence casts a shadow over an old lifestyle of shelter and security.  The Barna Group's study specifically aims to discover how Christians reconcile their faith with their fear when tragedy strikes.
Notably, the study reveals that nearly three out of four Americans say that terrorism prevention is equal to or more important a priority than things like the preservation of families, immigration, healthcare, unemployment and education. Even 12 years after the 9/11 attacks, it would seem the threat of terrorism remains a powerful public motivator in America. 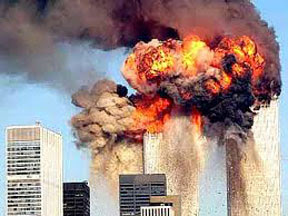 I found this segment of the survey especially interesting:  Millennials, currently ages 18 to 29, are among the most likely to prioritize preventing terrorism above other social concerns. The only things that came close to curbing terror among younger adults was improving education and preventing the break-up of families. Otherwise, Millennials are quite likely to place a premium on national security—the generation who, at the time of the 2001 attacks, were mere adolescents and children.  (This echoes what I continue to hear from this age group... they just want to have a future; they fear that the state of the world is going to erupt before they have a chance to really live their lives).
So how do people feel about 9/11, now that 12 years have past?  How do their feelings compare to immediately after the event?  As to be expected, sadness (47%) and anger (40%) were the dominant emotions of Americans when they first heard news of the attacks a dozen years ago. But they also report feeling fear (36%), confusion (28%) and anxiety (18%). As they look back on the event 12 years later, their emotions are mirrored, though slightly less angry: Half describe themselves as sad (50%), and nearly one third (31%) describe themselves as still angry.  (I would suspect that the tragedy in Benghazi last year would contribute to that emotion).
The Barna study also discovered that a plurality of adults across religious beliefs (43%) agree the events of 9/11 drew people closer to God. It is not surprising that more than half of born again Christians (54%) agree. What is striking, however, is that in the face of a national crisis as big as this one, one-fifth of atheists and agnostics also agree that the attacks in New York, Washington D.C. and Pennsylvania drew people closer to God.
I think we can all agree that Faith plays a defining role in a person’s response to tragedy, and the post-9/11 responses in the study are a prime example.  About 9 in 10 born again Christians (89%) say their faith comforted them during such terror events, and 2/3 say their faith helps them understand why such things happen.  But this isn’t true for all faith traditions. Those of a non-Christian faith are much less likely to say that their faith comforts them (58%) or provides understanding (41%).
So what does all this mean?  Can we make a definitive statement about what Americans feel about 9/11?  I think the difference in generations, our faiths, and our various cultures make it difficult to come to one solitary conclusion.  But Clint Jenkins, vice-president of research at the Barna Group has this to say:  “It matters what you believe about the world when you experience an event like 9/11. It matters how you view God, the afterlife, and your relationship with your fellow neighbors.”
But the study also supports what is commonly referred to as the “Terrorist’s Dilemma.” Jenkin explains.  “Terrorists can only bring about change if they make people afraid, and they can only make people afraid of the next attack. Their dilemma is, once the next attack comes, the people aren’t afraid anymore. Instead, they’re grieving for lives lost and damage done, they’re angry, and perhaps most importantly, they’re united.”
So, as Christians, we have a responsibility.  We know the next tragedy is coming; whether it be a terrorist attack, a school shooting, or another war.  And our faith actually helps us make some kind of sense out of the incomprehensible; it provides us comfort in the midst of the storm.  We can unite around that comfort and share it with our fellow Americans; helping them to navigate the trauma that is inevitable, and point them to our Savior.
I pray to God each night that we will never experience another tragedy such as we endured 12 years ago.  But I also know that all things are under the dominion and authority of God Almighty, and should He allow adversity to come, He will give us the strength to get through it.  Although it has been 12 long years since the Towers fell, I still have feelings of immense sadness and loss.  I only get angry when I hear our leaders make excuses for those who committed (or will commit) such atrocities.  But I will always remember that moment when I knew we were in God's hands.  It is there I will rest.  God Bless the memories of all those we lost on that day and every day since.

John 16:33    "I have said these things to you, that in Me you may have peace. In the world you will have tribulation. But take heart; I have overcome the world."
Posted by Pam Kohler at 7:00 AM