Another Look At Syria

With all the world focused on Syria, it's hard to know what is really going on behind the scenes.  Because deep down in your gut, you know that we aren't being told the truth, no matter what the many press conferences, or news anchors tell us.  Yes, it's about dictators and rebels supposedly fighting for democracy; and it's about religious strife and persecution.  But it's also about the oil pipeline that cuts through Syria; all the world powers are trying to protect their petrol interests.
But there is another angle that you will not find discussed by either Congress, the White House, or the Media.  Jim Denison, a Christian Post columnist brings another interesting discussion to the table.  It's been said by nearly everyone that is paying attention that the Syrian conflict "threatens world peace".  But is there more to that statement than the arguments given above? 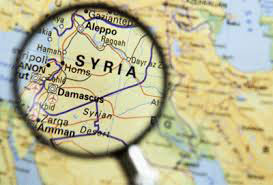 Mr. Denison gives a thorough report of some of the contributing factors that you've likely not heard. Among them are the following:  Ryan Crocker, former ambassador to Syria states that the Syrian conflict did not begin with the Arab Spring, but in 1982, when the Assad regime systematically eliminated the Syrian Muslim Brotherhood. The government has been preparing for insurgency ever since. Unlike the regimes in Egypt, Tunisia and Libya, it was ready for this war.
There is also the age-old Sunni vs. Shia element, with the Assad regime backed by Iran and the Shias; and the so-called rebel forces backed by the Sunnis and Saudia Arabia.  But the situation also affects the nation of Israel directly.  How?  Iranian lawmakers have boldly declared that a missile strike on Syria would result in an immediate retaliatory strike on Israel (and U.S. interests as well).  This kind of anti-Israel rhetoric has been a staple of Iranian foreign policy for more than 30 years. So why take it more seriously now?  And why is it connected now to an American action against Syria?
Mr. Denison says here's the part of the story we're not hearing .... Iran's leader, Ayatollah Ali Khamenei, believes that attacking Israel would bring the Mahdi ("Guided One"), an Islamic messiah who would protect Muslims from retribution and dominate the world for Islam.  Khamenei claims that his predecessor, the Ayatollah Khomeini, told him, "it will be during the time of your leadership that the last Shiite Imam, Imam Mahdi, will re-appear." To fulfill this role, Khamenei would need to lead Muslims to attack Israel. How would he carry this out?
One way would be an appeal to the Qur'an, which requires Muslims to "fight in the way of Allah those who fight you" (Surah 2:190). If America strikes Syria, Khamenei can characterize our action as an attack by "infidels" against Muslims. He can then call on Muslims to defend Islam by attacking America and its ally, Israel. This attack would lead to the re-appearance of the Mahdi, fulfilling Khamenei's role and establishing a base for global Islamic domination.
It amazes me that this part of the equation is not being discussed more openly at this time.  It is easy to see how the situation in Syria is about more than oil, sectarian differences, and Super Power muscle. Our decision to strike Syria has major global consequences and should be seriously considered.  Clearly, the stakes in Syria are higher than most of us imagine or are being told.
In his article, Mr. Denison is wise in suggesting that Christians should seek divine wisdom for our leaders and protection for those in Syria and across the Middle East. We can pray for Ali Khamenei to meet Jesus in a vision or dream, the kind of miracle now happening across the Muslim world. And we are called to "pray for the peace of Jerusalem".  As you can see, there is more at stake in Syria than oil and power.  Dear Lord, deliver us from Evil!

1 Timothy 2:1-2     "Therefore I exhort first of all that supplications, prayers, intercessions, and giving of thanks be made for all men, for kings and all who are in authority, that we may lead a quiet and peaceable life in all godliness and reverence."
Posted by Pam Kohler at 7:00 AM