I Suppose They're Happy Now

Do you recall the Oregon bakery who refused to bake a wedding cake for a lesbian couple?  Melissa and Aaron Klein suffered through a turbulent summer of hate-filled rants on social media and the intentional boycotting of their business.  They have been sued by the couple for discrimination and face possible substantial fines and up to $50,000 for emotional damages, if the suit is successful.
After attempting to overcome these obstacles, the Kleins have now been forced to close their business.  Rather than compromise their Christian faith, Melissa and Aaron decided it was time to lock the doors on Sweet Cakes by Melissa.  So the LGBT lobby won their battle.  But I have to wonder what they really accomplished.  They obviously found a bakery that would agree to make their wedding cake; otherwise there would have been another bakery added to their original suit, right?  So what was the real goal behind forcing the Kleins out of business?  Was it to make an example of them? To warn other Christian businesses that they could suffer the same fate if they choose to stand up for what they believe in?  Speaking of standing up for a position, shouldn't the lesbian couple understand that logic? 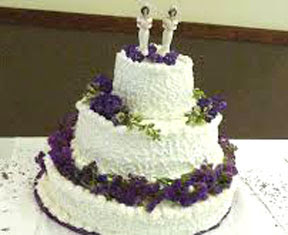 This wasn't about hate.  It was really about the recognition and understanding of the difference between one thing and another.  That is a definition of discrimination ... go ahead, look it up.  I bet that if a birthday cake had been the object of purchase, there would not have been a problem. We Christians just recognize marriage differently than the LGBT community.  And we understand marriage to be between one man and one woman; that's where "understanding the difference" comes in.  It does not mean that we think you are less committed than we are; that you are unable to love as we do; or that you are less than we are.  Just as you ask to be respected for your choices, we would like to expect the same.
But that's where things get a little convoluted.  The Kleins did not advocate that the lesbian couple should not have a wedding cake.  They just asked that the couple purchase their cake at another establishment.  That's all.  But the offended couple were not satisfied with that solution.  They were only happy after the Kleins were publicly harassed, boycotted, had their bakery truck broken into, forced to homeschool their children, and ultimately driven out of business.  Now, one could argue that the disgruntled couple were not personally responsible for every incident that took place, but they surely could have made a public statement asking for equal toleration.  They did not.
So will this result in more Christian bakers going against their beliefs and principles ... or less?  I guess that remains to be seen.   In the final analysis,  I just think this whole situation says a lot about the hearts of both couples.  The lesbian couple is continuing their challenge against the Kleins with the State Bureau of Labor and Industries, while Melissa Klein is moving on.  “Yeah, I have lost something I worked really hard for and put lots of years into, but I know that really doesn’t matter. My eternal home is what matters. I’m not going to bring all that with me…I’m happy and okay and the Lord is providing.”  The culture may have judged and punished the Kleins, but their unwillingness to compromise their beliefs should be applauded.