He Should Be Ashamed! 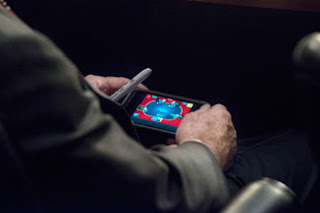 Senator John McCain's arrogance seems never-ending.  It seem pretty obvious to me that he is thumbing his nose at us... or at least at the men, women and families of the military.  I'm sure you've seen the picture of him playing online poker during the 3.5 hour Senate Foreign Relations Committee meeting.  In my eyes, this was a pretty important gathering of our political elite on whether or not to formally authorize the use of U.S. forces in response to the alleged use of chemical weapons on Syrian refugees.  Yet, Senator McCain couldn't give it his undivided attention.  Amusing himself seemed more important.
After the photo went viral, McCain seemed to laugh it off, with a tweet which said, "Scandal! Caught playing iPhone game at 3+ hour Senate hearing - worst of all I lost!"  So, maybe I'm just a little too cynical, but the world sits on the verge of WW III, and 3 hours is too long for him to dedicate to a decision that could potentially affect the future of this country ... let alone thousands of American lives? In case he hasn't noticed, the enemies of America have been very vocal about threatening our homeland should we make a decision to strike Syria.
Perhaps Mr. McCain has already made up his mind, and doesn't need to hear any further testimony.  But I think he owes something to the military personnel and families who will be called upon to react to the decision that he and his colleagues ultimately make.  I think he owes it to them to at least give his full attention to the matter at hand; and not to be coy and frivolous with his words when he is caught being negligent.
Maybe as an average citizen, my words don't bear much weight.  But Gold Star mother Debbie Lee has every right to weigh in with her opinion.  Not only is Debbie the mother of the first U.S. Navy Seal to be killed in Iraq, but she is one of Senator McCain's constituents.  In an exclusive interview with Breitbart News, Ms. Lee said,  “It infuriates me! We are facing the possibility of sending our sons and daughters to a war, conflict, military action or whatever politically correct term you use – an action that could change the world as we know it – and McCain couldn’t care less."
Lee continued, “McCain is so bored that he needs to play poker on his iPhone and then when caught jokes about it. How disgraceful!  Is that what the business of government has come to for so many who fill the halls of Congress? Is everything a gamble, with the best bet being the biggest bet? Has McCain already doubled down on war, since he knows the hand that is to be dealt?”
She concluded, “I’m sorry the lives of our brave warriors who are fighting for our freedoms bore you. I’m sorry my country, the country my son died for, bores you. I’m sorry that the risk of war bores you. Senator, it is time for you to resign your position as my Senator.”
I know I'm repeating myself, but Debbie Lee has every right to speak out as she did.  I have seen her speak in person, and believe me, she is passionate about standing up for men and women in uniform.  She has suffered the heartbreak of losing a son in war.  And to witness the haughtiness with which our elected leaders decide the fate of our children's lives must be an indescribable pain.  Her son followed the orders of such men as John McCain and performed his duty heroically.  Navy officers said that Marc died after single-handedly fighting off enemy fighters as his team rescued a wounded soldier. He fired 100 rounds of ammunition before being killed.
Don't you think the memory of Marc Lee, and the futures of many more like him, deserve John McCain's serious contemplation and undivided attention?  His action and his response are a disgrace to the uniform that he, himself, once wore.

Isaiah 49:15    "Can a woman forget her nursing child, that she should have no compassion on the son of her womb? Even these may forget, yet I will not forget you."