Reach Out & Touch A Life

I think we need to close out the week with a little touch of human compassion.  The Good Lord knows that it is sorely lacking these days.  And frankly, after the posts of the last few days, I needed a message that would wash away my pessimism and negative attitude about mankind.
This sweet story was just the remedy I needed.  The website, The Blaze, reported that Ashley England, and her young son, Riley, were dining at a local pizza parlor in their hometown of China Grove, NC.  That might not seem out of the ordinary, but Riley, aged 8, is a special needs child, and eating out could be a difficult experience for the family, and oftentimes disruptive for fellow patrons. 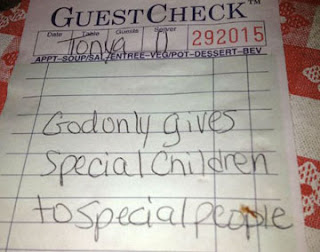 “The past few weeks have been very hard and trying for us, especially with public outings,” England said. “Riley was getting loud and hitting the table and I know it was aggravating to some people.”  You can imagine the reactions of most of the customers .... glaring stares, mumbled comments.
But one customer took it upon himself to ease the discomfort of Riley and his family.  The customer not only paid for the family's meal, but asked their waitress to deliver a message to them.  The waitress approached the family's table, and with tears in her eyes, gave them the note.  Ashley Englund responded with some tears of her own.
“To have someone do that small act towards us shows that some people absolutely understand what we are going through and how hard it is to face the public sometimes,” she explained, going on to express gratitude for the people who care and understand. “They made me cry, blessed me more than they know — I felt like ...  out of all the rude negative comments that we are faced with — this outweighs them.”
Here was a person who truly had compassion on his fellow man; someone who, through one small act of kindness, relieved some pain in another's life.  It just goes to show us that we don't have to call attention to ourselves, or make a big display of our kindness and compassion.  Who knows how long that family will bask in the glow of that stranger's sensitivity?  Or how much it affected all the other patrons in the pizza parlor?  Perhaps those who had scowled just moments before, would be forced to look at themselves a little more critically and resolve to be more patient.  And maybe the stranger's anonymous act would be an example for others to carry out similar gestures of kindness.
It was a small act, and one not likely to be heralded for long.  But I hope the ripple effect of this mysterious man's Christ-like deed will long resonate in the lives of those blessed to witness it.

Ephesians 4:32    "Be kind to one another, tenderhearted, forgiving one another, as God in Christ forgave you."
Posted by Pam Kohler at 7:00 AM