Pawn Of The Devil

You may find me a little too abrasive today, but I am simply flabbergasted!  There is no other way to express my consternation at a U.S. Senator equating a jihadist yelling "Allahu Akbar!" with a Christian proclaiming "Thank God!"  Yet that is exactly what Senator John McCain said when interviewed on Fox News.  And I will not let his callous remark go unanswered!  It offends me, and frankly, I find it irreverent and profane.
Is Senator McCain delusional?  Can he possibly be so politically correct, (or such a war hawk), that he can honestly lie on national television and expect to deceive the American people?
I would like to inform the good Senator that even Wikipedia is more truthful than he is.  This is their official definition:  Allahu Akbar is often translated simply as 'God is great.' Most Muslims, however, object to the use of the word 'Allah' to mean God, in the general sense, or specifically Jewish, Christian, Hindu, etc. Therefore, it means that 'Allah' (the Muslim God) is greatest' or even 'Allah' is greater (than your god). 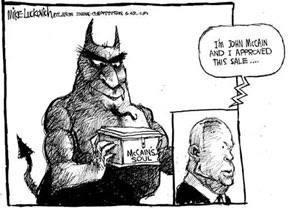 Now I would be willing to accept the "God is great" line of reasoning, if the actions of those shouting it should prove they were merely expressing the same reverent worship of their god as other religions exhibit.  But I challenge McCain (or anyone for that matter) to show me an instance when it was shouted in a spirit of joyous exultation over the goodness of their god.  I seem to recall only death, destruction and rage whenever this phrase is shouted.  And there is an implied challenge that belief in any other god is not to be tolerated; especially Jehovah, Almighty God of both Christians and Jews.
And to say that "Thank God!" is equal in its meaning or its implication is to willfully misrepresent historic events.  As Flight 93 plummeted to the ground in the fields of Pennsylvania, could you picture the Christians on board shouting, "Thank God"?  As Nidal Hasan committed mass murder at Fort Hood in 2009, can you imagine those fighting to survive shouting "Thank God"?  And as Nick Berg was being beheaded in Iraq in 2004, do you think he wanted to shout, "Thank God"?  Yet that is what Senator McCain would have you believe by equating the phrases of praise.
So when the Fox News interviewer played a video of rockets slamming into government-held districts in central Syria, and implied that the chanting of the Arab phrase betrayed ties to terrorism, McCain became aggressive in his defense of the mantra.
In further questioning our rush to war in Syria, the interviewer stated, “I have a problem helping those people screaming that after a hit."
“Would you have a problem with an American person saying ‘Thank God? Thank God?’” McCain asked, clearly irritated. “That’s what they’re saying.  Come on! Of course they’re Muslims, but they’re moderates and I guarantee you they are moderates.”  Oh really, Senator?  You can guarantee it?
Are you willing to bet the lives of your children and grandchildren on that?  Because that is what you are asking the American people to do ... to sacrifice lives on the battlefield and possibly in the streets of America!  I for one, am deeply distressed that the good Senator from Arizona is either this dumb or that deliberately deceptive.  And I don't think he's dumb!