It has been 10 years since Richard Reid, the so-called "Shoe Bomber", was tried and sentenced to 110 years without parole.  As you will recall, Reid's goal was to set off explosives (which he had packed into his shoes) while American Airlines Flight 63 was over the Atlantic Ocean, on its flight from Paris to Miami.
The purpose of this post is not to revisit this heinous crime, but to call to mind a time, not so long ago, when our judicial system stood solidly behind America and supported our founding tenets.  It was when our Judges were proud of who we are as Americans.  And so I would like to recall the words of U.S. District Court Judge William Young, who presided over the case.
When Mr. Reid announced to the court that he was an enemy of the United States and was part of Al-Qaeda, along with the declaration that "I am at war with your country", this was Judge Young's response: 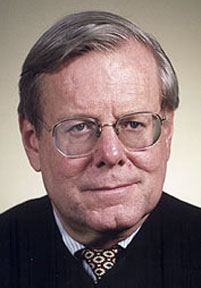 “This is the sentence that is provided for by our statutes,” Judge Young stated. "It is a fair and just sentence. It is a righteous sentence.
Now, let me explain this to you. We are not afraid of you or any of your terrorist co-conspirators, Mr. Reid. We are Americans,” the Judge commented. “We have been through the fire before. There is too much war talk here and I say that to everyone with the utmost respect. Here in this court, we deal with individuals as individuals and care for individuals as individuals. As human beings, we reach out for justice.
You are not an enemy combatant,” Judge Young looked Reid in the eyes and spoke. “You are a terrorist. You are not a soldier in any war. You are a terrorist. To give you that reference, to call you a soldier, gives you far too much stature.
Whether the officers of government do it, or your attorney does it, or if you think you are a soldier, you are not-----, you are a terrorist. And we do not negotiate with terrorists. We do not meet with terrorists. We do not sign documents with terrorists. We hunt them down one by one and bring them to justice.
So war talk is way out of line in this court. You are a big fellow. But you are not that big. You're no warrior.  I've known warriors. You are a terrorist. A species of criminal that is guilty of multiple attempted murders. In a very real sense, State Trooper Santiago had it right when you first were taken off that plane and into custody and you wondered where the press and the TV crews were, and he said:
'You're no big deal.'
“It seems to me, you hate the one thing that to us is most precious,” the Judge spoke. “You hate our freedom. Our individual freedom. Our individual freedom to live as we choose, to come and go as we choose, to believe or not believe as we individually choose.
Here, in this society, the very wind carries freedom. It carries it everywhere from sea to shining sea. It is because we prize individual freedom so much that you are here in this beautiful courtroom, so that everyone can see, truly see, that justice is administered fairly, individually, and discretely. It is for freedom's sake that your lawyers are striving so vigorously on your behalf, have filed appeals, will go on in their representation of you before other judges.
We Americans are all about freedom. Because we all know that the way we treat you, Mr. Reid, is the measure of our own liberties. Make no mistake though. It is yet true that we will bear any burden; pay any price, to preserve our freedoms. Look around this courtroom. Mark it well. The world is not going to long remember what you or I say here. The day after tomorrow, it will be forgotten, but this, however, will long endure.
Here in this courtroom and courtrooms all across America , the American people will gather to see that justice, individual justice, justice, not war, individual justice, is in fact being done….
See that flag, Mr. Reid? That's the flag of the United States of America . That flag will fly there long after this is all forgotten. That flag stands for freedom. And it always will.”

So, I ask you .... do you feel that our Judicial System still reflects these stirring words from Judge Young?  Do we still hand down righteous sentences?  (Does anyone even know what that term means anymore?)  When was the last time someone was labeled a terrorist ?  Or do we diminish the act of a jihadist as merely workplace violence?  Only 10 years ago, this Federal Judge felt he could honestly say that we don't meet with terrorists; don't sign documents with them; and don't negotiate with them.  But could he still say that as the glaring light of scrutiny shines on our activities in Benghazi?
And would he feel confident to declare that America still prizes individual freedom, when private business owners are being sued for their personal belief system in refusing to bake wedding cakes for same-sex marriages?  It's not as though the same-sex couple can't get a wedding cake for their ceremony; they just want to force another citizen to forego their personal freedom of choice in the matter.  Sorry, Judge Young, but your statement that Americans value "individual freedom to live as we choose, to come and go as we choose, to believe or not believe as we individually choose" doesn't quite have the punch that it used to.  I'm afraid that Americans no longer prize the individual justice that you espoused.  Today, it's becoming all about the collective.
And for all his conviction that "war talk" was way out of line, war would commence within a couple of months of this trial, and we are still mired down on multiple fronts.  As I contemplate the cost in dollars, lives, and limbs, Oh, how I wish his words would have been true!
Finally, Judge Young handed down the sentence according to "our statutes", which he believed guided this nation in its pursuit of justice.  Today our laws don't seem to matter much anymore.  The Constitution is being shredded before our eyes, and laws on the books are ignored when inconvenient to some new political goal; or they are unfairly administered according to some political agenda or bias.
(Sigh)  Ten years is not that long ago, and look how far we've traveled.  I shudder to think where we will be in another ten.  God, we need more of Your righteousness to avoid Your judgment!

Isaiah 32:16-18     Then justice will dwell in the wilderness, and righteousness abide in the fruitful field. And the effect of righteousness will be peace, and the result of righteousness, quietness and trust forever. My people will abide in a peaceful habitation, in secure dwellings, and in quiet resting places.