A Glimmer Of Hope

This last weekend, PLW and myself accompanied his parents to a benefit for a men's ministerial group in South Texas.  The guest speakers were none other than Miss Kay, Willie and Phil from the wildly popular Duck Dynasty family, the Robertsons.
Now, before you decide to write this post off as fluff and unimportant, let me tell you why I left the event that night feeling uplifted and inspired.  And in case you don't know who the Robertsons are, they are down-to-earth, God-fearing, plain and simple folk .... who just happen to be millionaire rednecks from Louisiana. 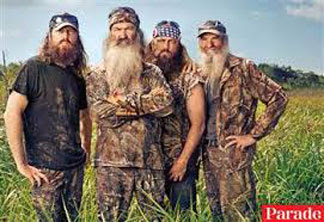 They are honest and candid about their family history; the years that the patriarch, Phil, slid into a life of alcohol, drugs and debauchery.  He left his family for a spell, and through the sheer perseverance and faith of his wife, Miss Kay, the family was held together until Phil hit rock bottom and turned to the Lord.  During her portion of the program, Miss Kay, in her own inimitable style, told us that she took to heart her grandmother's admonition that she should always "fight for her marriage."  She admitted that she didn't know what that meant when she fell in love, at the age of 16, with the handsome high school quarterback.
It wasn't long after their "rushed marriage", as she puts it, that she would learn just what her grandmother alluded to.  Phil's wandering ways nearly destroyed their family, their marriage, and himself.  But Miss Kay never stopped praying for him or fighting for him, and one day Phil answered that knock at the door and let Jesus in.  He began his own hand-made duck call business, garnered a good amount of success, and then handed over the business to his middle son, Willie, who took it to the moon.  Willie figured out how to market not only their duck call business to the world, but their family's faith, and that's a remarkable accomplishment in these days of "Jersey Shores" and "Housewives of Hollywood."
In case you doubt this claim, during his warmup for his father's speech, Willie thanked our gathering of 1,000 or so for supporting the show.  "Because you have spoken and supported our show, Duck Dynasty is now the Number One show on all of cable.  Isn't it nice to sit down and watch a TV show with your family?"  The crowd roared its approval.  He went on.  "And don't think that the TV executives aren't paying attention.  I can personally tell you that the execs on both the East and West Coast are seeing our success and planning more shows that follow our model of faith and family.  They are seeing what America wants, and although it's about the almighty dollar for them, I want you to know that we are beginning to change the culture!  We CAN change the culture!"
What a beacon of hope!  As just one person in the sea of humanity, I know that I am drawn to those vehicles that glorify my Lord, and therefore Duck Dynasty is one of the few TV programs that I watch religiously (sorry for the pun).  But to realize that I, along with millions like me, are making a difference by a simple choice of embracing this family is mind-bending.  It just goes to show that God can use anything and anyone to achieve His purpose.... even a bearded, ex-reprobate redneck like Phil Robertson.
And to say that I was blown away by the elder Robertson's speech doesn't do him justice.  I guess the closest adjective to describe his delivery would be to say it was "a good, ol' timey, Come to Jesus" talk.  He didn't pull any punches and he's the furthest thing from "politically correct" that you'll find in the entertainment industry.  He began by asking us if we thought our elected officials "loved us".  Did we think they were up there in Washington D.C. acting on our behalf because they "loved us"?   Why would Americans put more faith in the Elite than themselves, or a Savior that truly loved them?  He went on to denounce the Elite who have lost touch with the people who elected them.  And he decried the popular maxim that our Founding Fathers were not Godly men.  He stood on the stage and delivered quote after quote from George Washington, Thomas Jefferson, John Adams and James Madison that credited "God and Divine Providence" for the existence of this country.
"We don't know our history!" he thundered.  Then he went on to outline the influences that have shaped and altered our history, and have drawn this nation away from the Lord's authority.  He counted them off on the fingers of one hand ... Shintoism, Nazism, Communism, Beatniks, Hippies.  And what do they all have in common?  NO GOD!  Then he asked an illuminating question.  "So I ask you, what happened to that last influence?  They are in our universities teaching your children, people!"
Waving his Bible in one hand, and pointing to the crowd with the other, he went on to admonish us.  The consequence of our failure to safeguard God's position in our land has resulted in the easy decision to rip 60,000,000 babies from their mother's womb.  And their blood is crying out!  But it's not only the unborn whose blood is being spilled by godless influences.  Phil related how, in his lifetime, he has seen the black community turn to self-annilihation.  "I have worked in the cotton fields of Louisiana and Mississippi with good, God-fearing black family men.  They were my friends!  I have seen their families deteriorate through the welfare system until they are in the streets killing each other!  That is not who they were!  But when you take Jesus as the Savior of your family, and replace Him with the Government, this is what you get!"  I told you --- he is plain-spoken and frank; he speaks his mind; openly and with blunt force.
And to say that Phil Robertson takes his family's opportunity to witness for the Lord seriously, is a huge understatement.  He and his clan have demonstrated that they will not compromise for the sake of TV ratings or studio executives that want them to tone down their message.  Each of the show's episodes ends with the family gathered around the dinner table in prayer.  "We're trying to infuse a little good into the American culture," he said. "Love God, love your neighbor, hunt ducks.  Raise your kids, make them behave, love them.  I don't see the down side to that."  And that's my kind of entertainment!

Acts 2:39     "For the promise is for you and for your children and for all who are far off, everyone whom the Lord our God calls to himself."