Could we actually be seeing a shift in the consciousness of our culture?  While I do not put my faith in celebrity endorsements or proclamations, they can be a reliable barometer of the culture's mindset.  It is for that reason that I want to bring the following to your attention.  Over the last few days, two personalities who have influence over two different subsets of society have made some rather encouraging remarks ... at least from my perspective. 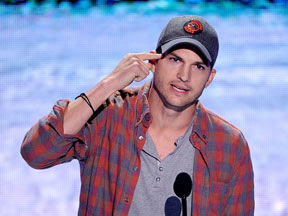 The first is Ashton Kutcher, who is a teen and young adult TV and film star, who is idolized by the younger generation.  Although you may be unaware of who he is, believe me, your daughter or grand-daughter knows his name.  Appearing at the Teen Choice Awards, he surprised adults who caught the drift of his speech.  It was not the customary pandering to his devoted audience.  As he ignored the repeated "We love you, Ashton!" from the teeny-boppers, here is what he had to say:
"In Hollywood, I have been privy to learning some of the "insider secrets" to keeping your career going.  But I want to say that I actually feel like a fraud.  My name is not even Ashton.  That's my middle name.  My real name is Chris, and there are some really amazing things I learned when I was Chris.  There are three important things that I want to share with you, because I believe they are what got me to where I am today.
First, I believe that opportunity looks a lot like hard work.  When I was 13, I had my first job with my dad carrying shingles up to the roof, and then I got a job washing dishes at a restaurant, and then I got a job in a grocery store deli, and then I got a job at a factory sweeping Cheerio dust off the ground.
And I’ve never had a job in my life that I was better than. I was always just lucky to have a job.  And every job I had was a stepping stone to my next job, and I never quit my job until I had my next job. And so opportunities look a lot like work.”
His second point was about "being sexy".  He explained to his young audience that "being sexy" has nothing to do with the "crap" they are told by society.  “The sexiest thing in the entire world is being really smart,” he said to cheers. “And being thoughtful, and being generous. Everything else is crap, I promise you. It’s just crap that people try to sell to you to make you feel like less. So don’t buy it! Be smart, be thoughtful and be generous.”
His third point and final piece of advice dealt with the fulfillment of refusing to live “inside the world”, and instead creating your own life.  He learned this while making his current movie in which he portrays Apple founder, Steve Jobs.  He said Jobs taught him that everyone is always telling you to play within the boundaries of what the world calls "life".  But he went on to add that Jobs learned something more valuable: “Everything around us that we call life was made up of people that are no smarter than you,” he said. “And you can build your own things, you can build your own life that other people can live in. So build a life — don’t live one, build one.”
Could this possibly be in response to the famous "You didn't build this" speech?  Whatever his reasons, Kutcher stepped outside the lines of Hollywood correctness.  While he stopped short of promoting a spiritual life, I think God would certainly endorse his argument.  It remains to be seen if his young audience will listen to his wise words.  But it was refreshing to hear someone in the "fleshly" culture of Hollywood return to his real roots. 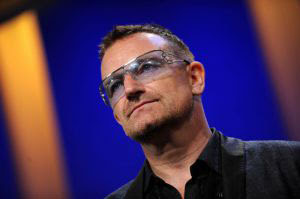 The second celebrity speaks to the older generation.   As the front man for the world-famous rock band, U2, Bono has wielded some power when it comes to shining the spotlight on third-world poverty, especially in Africa.  Bono has long been a philanthropist, as well as a proponent of big government programs for raising people out of poverty.  In fact, he greatly encouraged the expansion of U.S. foreign aid and other government programs (including debt cancellation) to alleviate the dire plight in the world of HIV/AIDS, malaria, abject poverty, and other issues.
But according to a speech he recently gave at Georgetown University, he may be having a change of heart.  “Aid is just a stopgap. Commerce [and] entrepreneurial capitalism take more people out of poverty than aid. We need Africa to become an economic powerhouse.”  This alteration in his economic and political stance can possibly be attributed to his purported Christian faith and his admiration for the work of C.S. Lewis.   "When you truly accept that those children in some far off place in the global village have the same value as you in God’s eyes, or even in just your eyes, then your life is forever changed, you see something that you can’t un-see.”
It also helps that he has benefitted from the economics of capitalism.   Besides being world famous for his music and social/political causes, Bono is also one of the world’s most successful venture capitalists. He is co-founder of the venture firm Elevation Partners, which was an early investor in Facebook. When the social media company went public, Elevation Partners’ stake was worth more than $1.5 billion.  I guess he saw first-hand, that no government aid program could build that.
Whatever his reasons, it's nice to see someone of his stature and respectability point out the benefits of capitalism.  Seems to merge nicely with Ashton Kutcher's thoughts on hard work, opportunity, being smart and generous.  We can use a little positive news from that part of our culture.
Because, you see, Satan has long used the entertainment industry as his playground and vehicle for enslavement of the masses.  Perhaps God just made the master chess move, and through the free will with which He endowed us, the players are recognizing that Satan's lies are empty and the life he offers yields no real rewards.  We can only pray and let God do His saving work!

Email ThisBlogThis!Share to TwitterShare to FacebookShare to Pinterest
Labels: Entertainment