Is This Who We've Become?

I don't usually quote talk radio personalities, instead choosing to express my own opinion on current news topics.  But when someone who has more credibility than I do mirrors my thoughts perfectly, then  he should get the credit.  In this case, it is Rush Limbaugh, and he has aptly expressed the outrage I feel over the senseless murder of Chris Lane in Oklahoma. 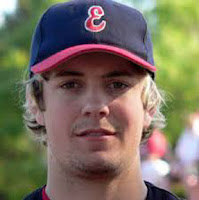 If you are not familiar with this story, it doesn't surprise me, because the Mainstream Media is doing everything they can to ignore it, or at least downplay it.  Chris is an Australian college baseball player attending East Central Oklahoma University in Ada, Oklahoma.  While out jogging one evening, he was targeted by three young teenagers, followed, and shot in the back "for the fun of it" and because "they were bored."  Besides the inhuman and cold-bloodedness of the act, the fact that this story is being buried due to the racial overtones is unconscionable.  The reason for this probably won't surprise you.... the victim was white, and those charged in the murder are black.
So like those of us paying attention to the lack of coverage, Rush felt compelled to speak out:  "“No matter where you look in the media, it’s not a racial event. This is the epitome of media irresponsibility,” Limbaugh reflected. “This is a classic illustration of just what role the mainstream media is playing in the destruction of American culture and society.”  The radio host went on to say that “there has been more outrage in the mainstream media to that stupid clown story at the Missouri State Fair than there has been to this wanton murder in Oklahoma.”
To give the MSM fair representation, they did finally report the murder 24 hours later ... and then quickly dismissed it, although the brutality of the act far outweighed the similarly tragic circumstances in the Trayvon case.  In the death of Chris Lane, there was no suspicion as to his motive for being where he was; there was no struggle; no question who pulled the trigger and why --- the suspects admitted their boredom.  And to ignore the obvious racial connotation is indeed irresponsible and cause for distrust of the media, so-called civil rights leaders, and yes, even the White House.
I must give kudos to Ed Henry, Fox News Chief White House correspondent, when he asked for a reaction from Josh Earnest, principal deputy White House press secretary.  Earnest's response?  “I’m not familiar with it, actually.”  Oh, really?  An article on The Daily Caller gives us the follow-up to that casual remark.  Henry explained the case in brief to Earnest, looking for reaction to the Oklahoma shooting death of Lane at the hands of “bored” African-American teens who thought it would be “fun” to kill somebody.
“This sounds like a pretty tragic case. I wouldn’t want to get ahead of the legal process here and it’s clear that law enforcement officials are involved and are investigating,” Earnest said. “But any act of violence is something that — the president I think himself has spoken pretty eloquently about violence in our communities and he stood at this podium a few weeks ago where he talked about his concern about the impact that violence is having on, in particular, young people in this country.”
Henry pressed Earnest, noting that the President spoke about slain teen Trayvon Martin in the Rose Garden and in the briefing room.  “Why hasn’t [the president] spoken out about this? In this case, you said there was a judicial proceeding. There was one in the Trayvon Martin case. He spoke out extensively on that one,” Henry said.  “There are some people in this room I don’t think who would agree with you that the president spoke out extensively on it,” Earnest responded.
Well, Mr. Earnest, there are people all across the American heartland who would agree that, having heard nothing from the President on Chris Lane, it is pretty obvious that his murder is of less consequence to the President and the Media than that of young Trayvon.  And that saddens me for several reasons. 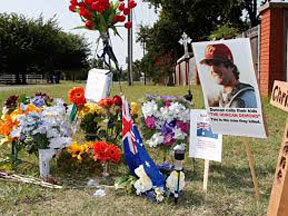 Any violent loss of life among our younger generation is cause for mourning and questioning.  They are the hope for our future.  But when the value of their loss becomes based on the race of the victim and the perpetrators, then we are making this about more than the crime.  I think we can all agree that the state of race relations in this country is spiraling out of control.  Hate between the races can be propagated on a personal or local level.  The parties come into direct conflict with each other; stoked by age-old biases and false perceptions.  But hate can also be communicated from seats of power and influence, and that is what we are seeing to a greater degree today.
Our churches and our elected officials are sowing the seeds of hate and disharmony to the point that we no longer see each other as fellow human beings.  That's what happened to Chris Lane.  Those three boys who shot him in the back saw nothing but his color, and as evidenced by their Twitter rants, they were so infected with hate that this tragic incident was inevitable.  (I refuse to repeat the ugliness of their comments; just suffice it to say that their souls were empty of any evidence of God).
And now --- once again --- guns will become the target and the focus of this senseless death.  That is ridiculous!  Instead of zeroing in on the tool of these boys' hate, why aren't we looking at the "why" and the "how" they could hate so much?  We need to be asking ourselves what is the agenda of all this race-baiting, and who benefits from the encouragement of racial hate?   How is it that these young minds could become molded so easily, and how have they become so de-sensitized to the point that they can kill without emotion?
I don't have to tell you that we, as a society, are facing a serious and dangerous situation.  Unless we can change the hearts of our young, I fear that Evil will continue to influence them through those who benefit the most from disharmony and hate.  Please!  We need to realize that we are not designed that way.  We are all made in the images of God.  Too bad that those three "bored" young men did not recognize themselves in Chris Lane.

ADDENDUM:  As I went to bed last night, reports appeared on the news of another racially motivated killing in Spokane, Washington.  This time it was an 89-year-old WWII veteran, allegedly beaten to death by two black teenagers.  At this early date, the crime appears to be random, and as usual, the media always suggests that robbery "could have been the motive."  They dare not suggest that race was the motivation, lest they be declared rascist.  But when will they accept that racial hatred is being fomented in this nation?  How many more "random" murders before we face the truth?  It's a sad reality that this gentleman of the Greatest Generation, who survived the Battle of Okinawa, died senselessly and pointlessly at the hands of the Lost Generation.