It is almost unfathomable to consider that chemical warfare is happening in Syria.  How far has mankind fallen in its evil ways to gas innocent people?  And I guess it shouldn't surprise us that the world leaders are at odds; they can't agree on which side [in the 2 1/2 year civil war] is lying about the chemical attack.  In the meantime, Damascus is crumbling into chaos. 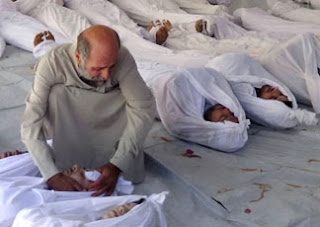 They can't even settle on a death count, with estimates ranging from 500 to 1,300 in the rebel-held neighborhoods of the Syrian capital.  And wouldn't you know it .... the United Nations fell short of calling for an investigation; instead settling for "clarity" on the issue by the blue helmets who are on the ground in Syria.  I don't know-- maybe it's just me.  But exactly what purpose does the U.N. serve?
According to Wikipedia, the United Nations is an international organization whose stated aims include "promoting and facilitating cooperation in international law, international security, economic development, social progress, human rights, civil rights, civil liberties, political freedoms, democracy, and the achievement of lasting world peace."  Not exactly living up to their claim, are they?
Because the major powers that sit on the U.N. Security Council cannot agree on who is responsible for these "alleged" chemical attacks, they have been unable to release an official statement.  In fact, Reuters reports that an earlier Western-drafted statement submitted to the council, seen by Reuters, was not approved. The final version of the statement was watered down to accommodate objections from Russia and China, diplomats said. Moscow and Beijing have vetoed previous Western efforts to impose U.N. penalties on Assad. 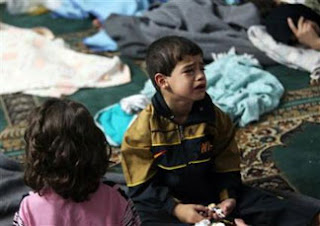 Well guess what?  The people who are dying in the streets of Damascus don't really give a damn about an "official statement"!  But their voices are not heard on the Security Council!    Here's just how ridiculous the world leaders look:  Russia backed up Syrian government denials by saying it looked like a rebel "provocation" to discredit Assad.  But the British Foreign Secretary voiced the opposite view: "I hope this will wake up some who have supported the Assad regime to realize its murderous and barbaric nature."
And where does our noble nation stand?  It's a little hard to figure out.  The President has made the use of chemical weapons by Assad's forces a "red line" that in June triggered more U.S. aid to the rebels.   Yet, he has opposition within Congress who feel that this "red line" has been crossed in the past with no consequences, so what effect do we really have?  It is anemic at best.
In the meantime, images are crossing news desks around the world that show scores of bodies - some of them small children - laid on the floor of a clinic with no visible signs of injury. Some showed people with foam around their mouths.  Independent reports confirm that doctors have treated hundreds of people with typical symptoms displayed by nerve gas victims.
But here is the rub, so to speak:  Syria is one of just a handful of countries that are not parties to the international treaty that bans chemical weapons, and Western nations believe it has caches of undeclared mustard gas, sarin and VX nerve agents.  So what exactly does the Security Council of the United Nations think they are going to do?  Seems to me, it is the same ol' axiom .... Nero fiddles, while Rome burns.  Except in this case, it is hundreds of innocent women, children and elderly citizens; whole families that are suffering while world leaders jockey for position.

Isaiah 17:1    "The burden against Damascus. “Behold, Damascus will cease from being a city, And it will be a ruinous heap."