The Correct Answer DOES Matter!

Here's an exasperating story, brought to you courtesy of SHTFPlan.com.  Earlier this year, the White House released a statement in regards to improving and expanding the quality of Early Education for our nation's children.  And I have written in the past about this Administration's love affair with the Common Core educational standards (which I am proud to say, the state of Texas is dismantling). 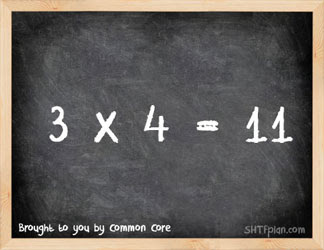 At a recent meeting in our President's adoptive state of Illinois, one state curriculum director gave this shocking assessment of the federally mandated Common Core standards:  "But even under the new Common Core… even if they [the student] said 3 X 4 was 11, if they were able to explain their reasoning and explain how they came up with their answer, really in words and in oral explanations, and they showed it in a picture but they just got the final number wrong, we’re really more focusing on the how and why."
In other words, it doesn't matter if a student comes to the conclusion that 3 x 4 = 11. So long as they can explain how they made this erroneous determination they go home with an ‘A’.  But here's even more horrific evidence that our children's education is substandard; in a study done by none other than Common Core itself!

•  Only 60% of students knew that WWI was fought between 1900 and 1950 — and they only had to guess the half century!
•  One in four high schoolers think Columbus discovered the New World after 1750
•  On the multiple choice test, less than half of high schoolers knew when the Civil War was fought. They didn’t even need to know exact dates, just that it was sometime between 1850 and 1900.
•  40% of students could not identify the name of the ocean on the eastern side of the United States.
•  Nearly 60% of students could not identify the two major political parties.
•  When asked who is in charge of the Executive Branch of the United States, 70% of high school students got the wrong answer.
•  Fully 75% of high school students failed to identify the First President of the United States
And if you need further proof that our children are being "dumbed down" by our educational system, I invite you to watch this humorous, yet tragic video.  Watch as high school students attempt to answer such simple questions as 1)  In which war did our country win its independence?  2)  Who is the Vice President?  3)  Which countries border the U.S.?  4)  How many stars on the flag of the United States?  5)  Can you name a country starting with the letter “U”?  Instead of laughing, it made me want to cry.
In an article written for The Activist Post, Dr. Ron Paul summed up the poor state of American education in these words:  "Critics of Common Core say it “dumbs down” education by replacing traditional English literature with “informational texts”.  So students will read such inspiring materials as studies by the Federal Reserve Bank of San Francisco, the EPA’s “Recommended Levels of Insulation,” and “Invasive Plant Inventory” by California’s Invasive Plant Council. It is doubtful that reading federal reports will teach students the habits of critical thinking and skepticism of government that the Founders considered essential to maintaining a free republic."
I am left with the irrefutable conclusion that there is a systematic plan in place that is designed to render American exceptionalism null and void.  With this kind of garbage in our schools, just how are our kids supposed to be players in a highly competitive globalized marketplace?  The answer:  they won't play a part.  How can they, when they don't know our history?  When they can't tell you the name of the war in which we won our independence?  Because you see, it's not about independence; it's about dependence on the Nanny State.  And when our kids are willing to accept that 3 x 4 = 11, they won't stand a chance.

Daniel 5:14    "I have heard of you, that the Spirit of God is in you, and that light and understanding and excellent wisdom are found in you."