Don't Be Messin' With My Mind!

Here's a really creepy story that I found through the TruNews website.  Apparently, scientists have been experimenting with planting "false" or "artificial" memories in mice.  And we all know that if they are experimenting on mice, then they've got plans for us, too.
While not really explaining how it was done, the article revealed that scientists created a research tool, called optogenetics, in which they were able to tinker with mouse genetics so that some of a mouse's brain cells could be stimulated into creating a memory that didn't happen.  Think that might possibly be used to the detriment of mankind? 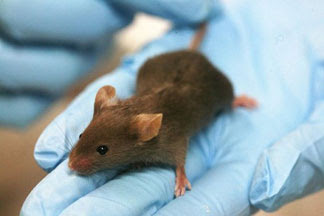 Here's what they did:  The researchers made mice believe that they had once received electrical shocks in their feet while sitting in a certain little chamber (Chamber A), even though that had never happened. Thereafter, whenever the researchers put the mice in that chamber, the mice would freeze up in a typical mouse response to fear.  Supposedly, this research needed to be done in order to have a better understanding of how false memories form in people.   You know, like how you were able to form a false memory of the time you got lost in the mall as a child, (even though it was really your brother) just because your parents told you over and over that it happened.  You've actually felt yourself "remember" the event more and more over the years, even though you were way too young to truly recall it.
Now, granted it might be important to get to the bottom of false memories in the case of false eye-witness testimony.  If we understood how a person is able to create, and then believe, a false memory of an actual event, then perhaps we could spare innocent people from being convicted of crimes they didn't commit.
But, as far as I am concerned, there could be far more nefarious utilizations of this procedure.  Couldn't this information be used to control a whole group or populace of people?  Couldn't a tyrannical government create an artificial memory of an event to manipulate the kind of response they want?  Isn't that what the scientists did with the mice?  They tinkered with genetics and DNA to get the mice to respond the way they wanted them to.  What's even scarier is the fact that they were able to even control when and where the mice responded in the manner they wanted them to.  They made note of what cells responded to the electrical shocks, and then were able to create the same response of fear, by controlling those cells, even though the mice were in Chambers B or C.
I'm sorry, but anytime there is talk, scientific or not, of engineering DNA, my antennae go up.  That naturally leads my suspicious mind to go in the direction of Hitler-like experiments to create a "superior race".  It could also be used to go in the opposite direction .... create a compliant, docile, and submissive population.  None of it is what God would approve.  He is the creator of our minds and our DNA.  We who have been created, have no reason to be altering the Master's work.
And if these scientists want to mess with DNA, wouldn't their time be better spent trying to understand why our cells mutate into cancer?  Wouldn't that serve mankind much more than learning how to restructure our memory bank?

Isaiah 29:15-16    "Ah, you who hide deep from the Lord your counsel, whose deeds are in the dark, and who say, “Who sees us? Who knows us?" You turn things upside down!  Shall the potter be regarded as the clay, that the thing made should say of its maker, “He did not make me”; or the thing formed say of him who formed it, “He has no understanding”?
Posted by Pam Kohler at 7:00 AM