I am deeply saddened and yes, even angry, over a couple of situations that have happened here in Central Texas.  The first is the case of Justin Carter, aged 19, who like so many people in this technological age, has no clue that social media is anything BUT a harmless expression of our First Amendment right.
And I say, "like so many people" because Justin's naiveté is not limited to those of his generation.  I can't tell you how many people my age that I have seen disclose political commentary, pictures of their latest firearms or commodities purchase, and angry rhetoric over everything from another person's race, to their sexual preference, to their faith -- or lack, thereof.  People wake up!  Are you paying attention to the changing landscape in our world?  Because if you aren't, let Justin's mistake teach you a lesson. 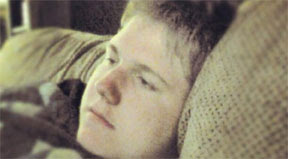 Justin is currently on suicide watch in a jail cell in New Braunfels, Texas because he made the stupid decision to get into an argument on Facebook over the online video game, "League of Legends".  His adversary called him insane, after which Justin made a most inappropriate and morally wrong comeback about shooting up a school and eating the hearts out of kids.  He then finished his post with "Lol" and "j/k" ... Laughing out loud and just kidding.  Was that about the most ignorant, foolish, insensitive and immature statement he could have made?  Absolutely!  I would use those words to describe his actions and probably some worse than that.
But does his comment warrant a bond of half a million dollars, and a possible 10-year jail sentence?  Because that is what Justin is facing.  In fact, he has been sitting in a Comal County jail since February, after someone filed a complaint about the comment, a search warrant was issued, and then a warrant for his arrest was carried out.
According to Justin's father, Jack, his son has suffered "concussions, black eyes, been moved four times from base for his own protection.  He’s been put in solitary confinement, nude, for days on end because he’s depressed. All of this is extremely traumatic to this kid. This is a horrible experience.” CNN reports his father saying that his son is “very scared and he’s very concerned that he’s not going to get out. He’s pretty much lost all hope.”
Should there be consequences to Justin's careless and callous remarks?  You bet!  But $500,000 bond?  His attorney says he hasn't seen bonds that high for rapists and murderers in his entire career!  And what about the hateful and threatening Facebook comments made in regards to George Zimmerman or those made during the last election about "cracker babies" that have come and gone with no repercussions?  Where is the justice in this case?  And why is this kid being singled out and punished to this extent?  The world just seems upside down! 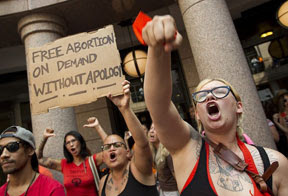 Then the other event that has me deeply troubled is the reaction to the abortion battle going on in my state.  Both pro-lifers and supporters of abortion have descended upon the state capital in Austin to make their voices heard.  All the drama centers around a proposed bill which would ban abortions after 20 weeks of pregnancy, require that the procedure be performed at ambulatory surgical centers, mandate that doctors who perform abortions obtain admitting privileges at a hospital within 30 miles and that even nonsurgical abortions take place in a surgical center.
Although I am completely against abortion, I must ask ... how is that restricting anyone's abortion rights?  For the life of me, I cannot understand any reason that a woman could not make up her mind about killing her baby before the 5th month of pregnancy.  I understand that only five out of 42 clinics in Texas qualify as ambulatory surgical centers and they are in major metropolitan areas.  That means many clinics would need to relocate to meet ventilation requirements and to have the space required for operating rooms and hallways.  But shouldn't that tell us that perhaps there are far too many "clinics" that should not be performing this procedure?  Has everyone forgotten the appalling conditions found in Dr. Gosnell's so-called "clinic"?  What's wrong in at least setting a standard for proper operating procedures and locations; for making it as humane as possible for the child whose life you are ending?
But I think I've found my answer in the way the opposing groups chose to support their position.  As the pro-life supporters sang Amazing Grace, the pro-abortion rights group harassed them with shouts of "Hail, Satan!"  I suppose that if you can abort a baby that is 5 months or older, then there is no room in your heart for love, and it would be easy to praise Satan and proclaim him as your god.
I know that must sound judgmental and cruel.  But, as Jesus is my witness, I cannot get into the heads or hearts of these women!  They are so deceived!  They have been led down a path full of lies and false promises.  Satan has convinced them that with control of their bodies comes autonomy and power.  But in worshipping themselves and their bodies, they have lost sight of the fact that they are killing a part of themselves.  That baby is an extension of them and they have, in effect, terminated and eliminated it.
They will be forever changed, whether they realize it or not.  Satan deluded them into destroying a part of themselves; all in the name of women's "rights".   I have to give him credit; Lucifer has done a good job of convincing millions of women to worship at his altar of "choice", while blinding them to exactly what was being sacrificed on that altar.... millions of babies that God trusted to their bodies.   And I can't help but think that even a child conceived from rape or incest is a creation of God; the one and only Creator.  Satan cannot create, only God can.
And so it makes me sad to see that my beloved state of Texas is home to such outrageous and monstrous demonstrations of injustice and immorality.  But I guess if I wanted to extinguish honor, justice and decency in this country, then a good strategy would be to strike at the heart of its existence.  If you can defeat it in Texas, then it makes sense that the rest of the country will follow, right?  I pray that God will give Justin and his family strength and peace to withstand their ordeal.  And I ask God to remove the scales from the eyes of those who willfully destroy His creation.  And please, God ... won't you bless Texas?