There is a lot of "alleged" accusations in this story.   Now, the meaning of allege is as follows:  to claim or assert that someone has done something illegal or wrong, typically without proof that this is the case.  Which makes it very easy to publicize a statement, especially if you want to discredit it.  You can use the "alleged argument", while getting your agenda across.  I'll let you decide for yourself if the comments by an Air Force Chaplain warrant the censorship they received, based on an "alleged" offense.
Here's the story:  According to an interview with Todd Starnes of Fox News, Lt. Col. Kenneth Reyes says he penned “No Atheists in Foxholes: Chaplains Gave All in World War II” for the Chaplain’s Corner column on the website of Joint Base Elmendorf-Richardson in Anchorage, Alaska.
But the Military Religious Freedom Foundation reportedly accused Reyes of an “anti-secular diatribe” and publicly disparaging “those without religion” in a letter to the base commander, allegedly (there's that word!) on behalf of 42 anonymous airmen who complained.

In a letter to Col. Brian Duffy, the base commander, a Mr. Blake Page of the MRFF had this to say:  “In the civilian world, such anti-secular diatribe is protected free speech.  Beyond his most obvious failure in upholding regulations through redundant use of the bigoted, religious supremacist phrase, ‘no atheists in foxholes,’ he defiles the dignity of service members by telling them that regardless of their personally held philosophical beliefs they must have faith.”
First of all, I take offense that the phrase, "no atheists in foxholes" is either bigoted, religious or supremacist.  From my understanding this phrase comes from the experience of men in combat; it is a truth that has been verified through centuries of warfare, by men that have witnessed that faith, of various kinds, is always present.   Can Mr. Page categorically say this is a lie?  It is an opinion by people who have been there, done that.   In fact, the essay that Lt. Col. Reyes supports that fact; that everyone believes in "something" at that moment of crisis.
It took only five hours for the Air Force to cave, and the essay was removed from the base's website.    But the MRFF wants it's pound of flesh.  They want Lt. Col. Reyes punished for his "hate speech".  I'll let you decide for yourself.  Did this Air Force Chaplain cross the boundary?  Here is his essay, which Fox News was able to track down:

Many have heard the familiar phrase, “There is no such thing as an atheist in a fox hole.”  Where did this come from?  Research I verified in an interview with former World War II prisoner of war Roy Bodine (my friend) indicates the phrase has been credited to Father William Cummings.
As the story goes, Father Cummings was a civilian missionary Catholic priest in the Philippines. The phrase was coined during the Japanese attack at Corregidor.  During the siege, Cummings had noticed non-Catholics were attending his services.  Some he knew were not Catholic, some were not religious and some were even known atheists.  Life-and-death experiences prompt a reality check.  Even the strongest of beliefs can change, and, I may add, can go both ways – people can be drawn to or away from “faith.”
With the pending surrender of allied forces to the Japanese, Cummings uttered the famous phrase “There is no such thing as an atheist in a fox hole.”  In one of my many discussions with Roy, he distinctly remembered a period on the “Hell Ships” – these were ships the Japanese used to bring POWs from the Philippines back to Japan. They were unmarked and thus ‘fair game’ for attacks from the allies from the air and sea.  Of the 3,000-plus POWs listed on the ships, only 180 survived the journey. 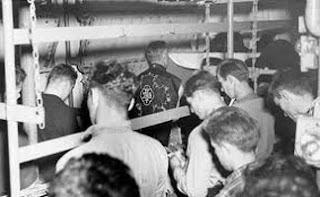 “When our own planes were attacking us,” Roy said, “I remember Father Cummings calming us down by reciting the Lord’s Prayer and offering up prayers on our behalf.  For a brief moment I did not hear the yells and screams of dying men as our boat was attacked by our own men.”  He went on to say, “There was a peaceful quiet during the attack that I cannot explain nor have experienced since.”  Later on during the trip to Japan, Cummings, after giving his food to others who needed it more, succumbed to his own need and died of starvation.
Everyone expresses some form of faith every day, whether it is religious or secular.  Some express faith by believing when they get up in the morning they will arrive at work in one piece, thankful they have been given another opportunity to enjoy the majesty of the day; or express relief the doctor’s results were negative.
The real question is, “Is it important to have faith in ‘faith’ itself or is it more important to ask, ‘What is the object of my faith?’”
Roy never affirmed or expressed whether his faith was rooted in religion or not, but for a moment in time on the “Hell Ships,” he believed in Cummings’ faith.
What is the root or object of your faith?  Is it something you can count on in times of plenty or loss; peace or chaos; joy or sorrow; success or failure? What is ‘faith’ to you?

Now, is there evidence of any "hate" in this essay?  Does the Chaplain say you're a bad person if you are an atheist, or that your object of faith must be the same as his?   If anything, it seems to me that the MRFF is the one who is bigoted and supremacist; who wants to limit Chaplain Reyes' freedom to express his faith.  After all .... he's a Chaplain!  Oh, wait a minute .... now I get it!  Not only does the MRFF object to the phrase no atheists in foxholes, perhaps their real agenda is no Chaplains in the Military!
It is a sad day in this country when our Military quickly and willingly stand down from attacks on faith among the ranks.  Without faith, you have no hope; and wars fought without hope become just about death and destruction.  How does humanity continue to exist?

Acts 4:29     "Now, Lord, look on their threats, and grant to Your servants that with all boldness they may speak Your word"
Posted by Pam Kohler at 7:00 AM