Are You Ready For This?

I sometimes feel as though I am beating a drum that no one hears; that if my fellow Christian Americans can avoid the headlines, then they can convince themselves that there's nothing to worry about.  Well, I'm going to bang the drum louder.  And it doesn't really matter if you count yourself a Believer or not, but you should take a good hard look at the headlines below.  They all appeared in a single day on the website, Worthy.com.  As human beings, how can we continue to ignore these threats? 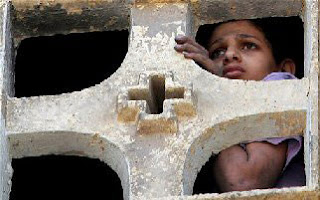 •  Morsi Muslims "Rage" Against Copts - In the days leading up to the successful anti-Morsi petition by the Egyptian people, Morsi's supporters began threatening Christians via Muslim Brotherhood-run mass media outlets. When Morsi was finally forced from office, Islamist broadcasts blamed both Egypt's military and its Christians, whose blood they vowed to spill in revenge for the former's coup.  Dozens of churches have been vandalized and destroyed, along with the personal homes and businesses of Coptic Christians.  The latest headlines are predicting a bloodbath, and the death toll is now over 50, and rising.

•  Pakistan Militants Threaten To Kill Christian Lawyer - The chief lawyer defending Christian women who were reportedly sexually abused by activists of Pakistan's ruling party said that Muslim militants have threatened to kill him if he and his legal team continue with these cases, along with those that include attacks on a Christian neighborhood and rape.

•  Free Syrian Army Massacres Christian Village - Around 350 armed militants forcefully entered the homes of Christian families who were all rounded-up in the main square of the village and then summarily executed.  Syrian army sources said they only reached the village after the massacre, resulting in clashes with militants who included both Turkish and Chechen jihadis.  The situation for Syria's religious minorities have become increasingly worse as Free Syrian Army affiliated Islamist organizations are free to engage in ethnic cleansing operations in a country where kidnappings, executions and assassinations have become all too commonplace. 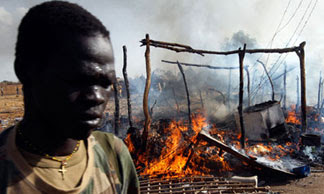 • Christians Slain By Islamists in Nigeria - In the last six months, more than 100 Christian farmers have been killed or injured and almost 100 churches destroyed in attacks by armed Muslim Fulani herdsmen.  The Reverend Johnson Kikem had this to say, "It's because we have refused to bow to the god of Islam, and so the plan is to forcefully Islamize us.  It is part of the Islamic agenda to impose sharia on Christians in the northern part of Nigeria."  Kikem said Islamic extremists are believed to be arming Muslims and encouraging them to attack Christians.

•  Iraq Christians Fear More Violence After Church Attacks, Killings - We in the U.S. are under the false assumption that the war has ended in Iraq and everyone is peacefully co-existing.  Not so!  Just consider these facts that have recently been reported:  1)  Assyrians, one of the main Christian groups in Iraq, are once again the target of violence as part of a wider anti-Christian campaign by Islamic militants that began in 2004 when the first church was bombed  2)  Since 2004 at least 15 church leaders were kidnapped, including seven priests and three deacons who were murdered, while five priests were released after ransom was paid.  3)  Additionally, 73 churches were attacked or bombed since June, 2004.  4)  Women have been especially targeted, with at least 13 young Christian women being abducted and raped, causing some of them to commit suicide.  Militants were reportedly also demanding that Christian women be sent to the mosque to be married off to Muslims.  5)  The terror group Al-Qaeda has also moved into an Assyrian neighborhood to collect jizya, a special tax levied on a section of an Islamic state's non-Muslim citizens.  Approximately 500 Assyrian shops in a market were burned in one night.  6)  Anti-Christian forces were also seen blockading Assyrian villages, while Christian children were kidnapped and forcibly transferred to Kurdish families.

•  Syria Militants Behead Catholic Priest, Two Others - The graphic killing was posted online as an alleged warning to others who would be so bold as to practice their faith.  The Archbishop of the Catholic Church in Syria states that this tragedy underscores "The whole story of Christians in the Middle East" that "is marked and made fruitful by the blood of the martyrs of many persecutions."

Need I go on?  Because believe me, I could.  These are not isolated nor random headlines.  They are becoming increasingly commonplace and are graphic indications of the threat that Christianity is under throughout the world.  I say The World, because I do not think America will escape our share of persecution.  Indeed, if you are truly paying attention, then you have already seen the early suggestions of coming violence.  And in case you think that these evil forces can determine whether you worship Jesus Christ or not, you better think twice.  Because whether we, as a nation, officially recognize it or not, they view America as a Christian nation.  Kind of ironic, huh?
Here are just a couple of examples of what our future could look like .... Back in February of 2013, Yusuf Ibrahim, a muslim in New Jersey, shot two Christians in the chest at close range,  beheaded them, and buried their bodies, heads and hands in separate graves.
This is not a new phenomena, either.  In June of 2010 David Wood, with other Christian Evangelists of Acts 17 Apologetics, were arrested by the city police near the Arab International Festival in Dearborn, Michigan, and charged with “breach of the peace”.  When arrested, the Evangelists were peacefully speaking with passers-by and distributing the gospel of John. 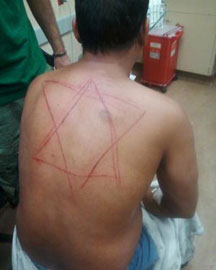 And are you familiar with the story of Arab author Alaa Alsaegh, who immigrated to the U.S. from Iraq in August, 2011?  He was attacked by Muslims on the streets of St. Louis, Missouri. They stabbed him and carved a Star of David into the flesh of his back.  Why?  Because he  had published an Arabic language poem titled “Tears at the Heart of the Holocaust” on the website ArabsForIsrael.com.  The poem expressed his love for the Jewish people and his sorrow over their fate in the Holocaust.
There are countless other examples of individuals who find themselves under undue scrutiny for simply stating their Christian beliefs on social media.  They are threatened with loss of jobs, "investigation", or other forms of persecution.  True, we, here in America, have not yet seen the extent of violence being perpetrated against Christians in the Middle East.  But when we turn a blind eye to foreign influences within our government and culture, and turn the other cheek when our faith is forcibly removed from the town square ( or a pitcher's mound in Busch Stadium, for pete's sake!), then we shouldn't be surprised when the cancer that is spreading across the Middle East, Africa, and Europe manifests itself right here in our homeland.
So don't be surprised when it shows up in a neighborhood near you.  Satan and his evil minions are becoming emboldened by the fervor of anti-Christian sentiment across the globe.  We must prepare ourselves spiritually and physically for what Jesus told us would be our fate if we followed Him.  So please pray for our fellow Christians around the world, and for their protection, as well as ours.  We will endure for our Lord and we will not be defeated!