Where Have Our Heroes Gone?

I ran across a fascinating article on World Net Daily, asking the rhetorical question, "Do We Really Need that 'David and Goliath" Stuff?"  It was the musings of some psychoanalytical sociologist who questioned the need for society to revere superheroes; some malarkey about it engendering divisiveness and violence.
She seemed to think it wrong to elevate the heroic exploits of David's defeat of Goliath, or Joan of Arc leading the French army in victory over England; that it "divides life into a black and white picture of good and evil, and in doing so, it justifies violence."  And that, my friends, is at the heart of what is wrong with today's culture!
Pointy-headed elites such as this want to paint our world in shades of gray, where everything is relative, on the same plane, and where no one stands out above others.   In other words, we are all the same and no one aspires to greatness.  But does that really mean that there will be no disagreements, alienation, or hostilities?  The reality of this world is that it IS black and white; good and evil; light and dark.  And that is why we need heroes! 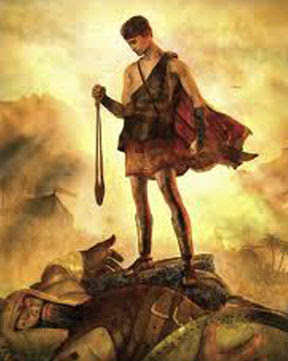 It used to be that heroes possessed certain character traits that made this world a better place.  Some of these were:  courage in the face of personal perils; the ability to care about others; determination and endurance to overcome obstacles; cleverness and inventiveness; a confident belief in oneself, and a positive outlook on circumstances.   But our culture has nearly demonized individuality and changed the image of what a hero is.

A study at Santa Clara University revealed that a couple years ago the administrators of the Barron Prize for Young Heroes polled American teenagers and found only half could name a personal hero. Superman and Spiderman were named twice as often as Gandhi, Martin Luther King, or Lincoln.  The study made it clear that our media make it all too easy for us to confuse celebrity with excellence; of the students who gave an answer, more than half named an athlete, a movie star, or a musician. One in ten named winners on American Idol as heroes.  How sad is that?  Which caused me to question how we could have let this happen.
I know that I had my childhood heroes.  And I found them through the books I read and the stories I was told by my elders.  I sat at the knees of my parents and aunts and uncles, and I heard the stories of my  ancestors and the hardships they had overcome in their lives.  I was painted mind pictures of long sea voyages across the Atlantic and lonely arrivals on Ellis Island.  I was told stories of burying the family silver, along with other treasured possessions, in the yard as my great-grandmother fled before the advancing Yankee army.  I was told how my grandmother suffered through a debilitating childhood disease, the death of her young husband, and poverty in the Great Depression to become a symbol of courage, dedication and persistence to an entire town on the plains of eastern Colorado.
And I gobbled up the legends of early American heroes and heroines through countless pages of books that fueled my hunger for tales of daring and fearlessness.  Were some of those stories embellished?  Probably.  Nevertheless, they made me want to aspire to the noble characteristics of these normal human beings who found it within themselves to become more than average .... and for all the right reasons.  They embodied moral courage and a daring boldness that I wanted to emulate.
But I fear that our youth today have become both cynical and deceived.  In my day, we applauded the bravery of astronauts who flew to the moon, and recognized the courage it took for Martin Luther King to stand up for his civil rights.  And we honored the memories of those heroes who contributed their lives to the ongoing freedom of our nation.  But today, our kids see the steroid scandals in Major League Baseball, the shocking series of lies and misconduct from within our government at the highest levels, and the glee and triumph with which our media seek to tarnish anyone who reaches for a higher rung.  So who are they left with for heroes?  Movie stars, musicians and reality show celebrities.  And none of that contributes to an effective role model for a successful ... let alone heroic life.
And that's where I think we've failed.  We should be encouraging them to become heroes; not just another ribbon-receiver with everyone else on the team.  We need to feed their imaginations with the stories of their ancestors and this nation's pioneers, groundbreakers, and trailblazers.  They need to know that it is OK to be more than average; to want to excel; and to dare to be a David or a Joan of Arc.  We need to expand their ideas and sense of possibility and encourage them to be leaders and to reach for the stars!

Email ThisBlogThis!Share to TwitterShare to FacebookShare to Pinterest
Labels: Heroes, Our Culture.