America: How The Rest of The World Sees Us

As I scan the headlines, I can't help but notice that the perception of America as the "Land of the Free and the Home of the Brave" is damaged among the peoples and nations of the world.  One of the reasons can be laid at the feet of the NSA.  Reports that European Union offices and computers were hacked has resulted in leaders of the EU intimating that trade relations could be effected.  Germany's Foreign Ministry has actually summoned the U.S. Ambassador to do a little explaining.  French President Francois Hollande also threatened to block negotiations on a transatlantic free trade treaty, and allies from Belgium to Italy and throughout Europe have used the strongest language possible to register their distaste for alleged American spying. 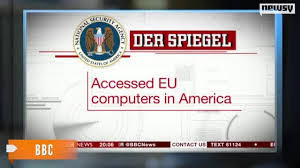 But it's not just government heads that are suspicious and mistrustful of our motives and actions.  Fugitive CIA whistleblower Edward Snowden released information to the German magazine Der Spiegel, in which he said the US had monitored phone lines and bugged embassies of European countries.  Editorials are appearing in the magazine lamenting the German peoples' lack of faith and doubt in the American government.  Having lived through the Nazi and Communist subversion of their own government, they are now openly warning Americans to wake up from our complacency and see the threat to both our liberty and our security.  While acknowledging the need to collaborate on both sides of the Atlantic to pursue and prevent organized crime and terrorism, the article admonishes that "it must be done in a way that strengthens civil liberties and does not reduce them."
And it's a pretty sad commentary when a German citizen writes an editorial that chastises and corrects the President for his incorrect use of a quote by one of our Founding Fathers.  Malte Spitz got it right when he wrote, "Perhaps instead of including a quote from James Madison in his speech, arguing that “No nation could preserve its freedom in the midst of continual warfare,” Mr. Obama should have been reminded of the quote from another Founding Father, Benjamin Franklin, when he said, “They that can give up essential liberty to obtain a little temporary safety, deserve neither liberty nor safety.”  The German people have made it very plain that they have no intention of relinquishing their liberty, and no intention of repeating their historical mistakes by blindly trusting leaders who promise security through a reduction of freedom. 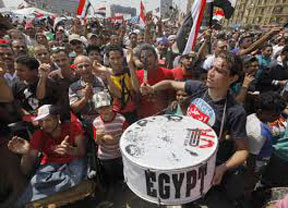 But it is not only Europe who has become disillusioned with how America is conducting its affairs.  Opposition groups to Egyptian President Mohamed Morsi are accusing the US of "being partner to a conspiracy to keep President Morsi in power."  The mass rallies in Cairo's Tahrir Square are evidence that the populace is disillusioned with the lack of promised democracy.  As far as the $1.3 billion in military aid the U.S. government gave the new Egyptian leader, the rebels are now furious.  "America and the Brotherhood have united to bring down the Egyptian people," said Hassan Shahin, a member of the Tamarod, or "rebel," movement.  To prove their point, the protestors have stormed and ransacked the Muslim Brotherhood headquarters and given a time demand to Morsi to abdicate his presidency.
And it's only a hop, skip and a jump to the powder keg in Syria.  I don't think I need to remind you that we have made some questionable alliances and some poor decisions in the midst of their civil war.
Of course, our relations with Russia are surely to be strained as Putin appears to be offering asylum to Ed Snowden, in direct defiance of our government's demands.  Of course that hasn't stopped the two Super Powers from signing agreements that will allow trained Russian "experts" to provide security at mass events.  (This is according to an article by the Ministry of the Russian Federation of Civil Defense, Emergencies and Elimination of Consequences of Natural Disasters).  So can we now surmise that we are no longer capable of providing our own security or cleaning up after a natural disaster?  Try telling the folks in Moore, Oklahoma or Joplin, Missouri that!
All in all, the headlines of the day show a disturbing trend in regards to the image, perception, and actions of America.  We used to be the nation that everyone looked to for inspiration; and our influence and impact were sought after.  Now it appears as if we are mistrusted, doubted and down-right duplicitous in our foreign relations.  I am inclined to believe that the slide from the original vision for America has been occurring at a gradual, yet steady pace over the last century.  My fear is that somewhere in the near future, we are going to wake up and discover that the gradual decline has become a full-blown plunge.
Now, more than ever, we need to return to the values and purpose for which this nation was founded.  Regardless of what the peoples of other nations think of us, Americans still know what freedom, virtue and honesty look like.  It is up to each of us to embody those principles in ourselves, instill them in our families and export them to our communities.  Now is the time to show the world what we're made of!