In Defense of Paula Deen

I know that even my headline will draw the ire of many across this land.  But at least it grabbed your attention, right?  And I'm hoping it will make you want to read more, and find out exactly what I mean.
Let me start by saying that I am, in no way, supporting the derogatory term Paula Deen used; you know the one ... that depending on what race you are, can either be a sign of brotherhood, or a hateful and abusive term.  Simply stated: no one in the 21st century can claim ignorance over how this word will be perceived; especially if you are a white woman from the South.  BUT, I am amazed that this is the only thing people are focused on!
Everyone in the media seems to have forgotten the facts of this situation: namely, that she admits to using the word in a court deposition to "describe the man who held her up at gunpoint when she worked as a bank teller in the 1980s."  Does that make it right?  No!  But how many of us could say that we wouldn't perceive someone who held a gun to our head in the most negative light imaginable? I don't care what your race is, where you come from, your gender or what color your eyes are --- we would despise that person and you're going to describe them in the most despicable manner you can; it's a natural release of your emotions.  That is called being human; in all our sinful, shameful ways. 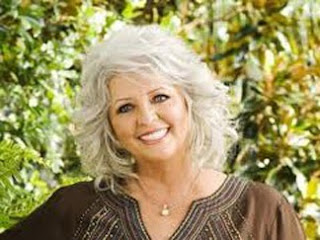 And how is it different than someone of another race deliberately referring to George Zimmerman in the most insulting way she could think of ... as a "cracker"?  I don't hear America screaming that this is discrimination!  But I have heard murmurings that Paula Deen's sin is greater because it is just another manifestation of "white privilege".  Hogwash!  A sin is a sin is a sin!  If you have wronged another person, either by word or deed, there should be consequences.  Once the error of your ways has been pointed out, you have apologized for the hateful remark, and society has exacted its proper "punishment", you should be forgiven.  Whether you continue to display offensive actions will determine if, and how quickly, you can reclaim your place in a magnanimous society.
But that is exactly the problem.  We are no longer magnanimous.  We are no longer generous or compassionate towards those who fall from grace.  Paula Deen's pound of flesh has turned into a banquet for the vultures who are just itching to devour every ounce of her soul.  It's not enough that she has been humiliated and portrayed as a bigot and rascist.  It's not enough that her successful business has been destroyed, and her future looks nonexistent.
I've heard no mention of her efforts, along with Smithfield Foods, to deliver 25,000 pounds of protein to Hosea Feed The Hungry and Homeless, an Atlanta-area hunger relief organization.  And what about her Bag Lady Foundation, which she started specifically to assist “women and families in need”, in part by “aid[ing] individuals, communities and like-minded organizations to empower those facing a range of challenges resulting from poverty.”  Do you not think that many of those who have benefitted from these poverty programs in the South might be a member of the race she has been judged to have offended?  As far as I'm concerned, her actions speak louder than her words.
And shame on Smithfield Foods for terminating their partnership; and how cowardly.  They could have stepped up and worked with her to show the nation that she is more than one careless, ignorant remark.  They could have shown another side of Paula Deen and helped a human being redeem herself.  Instead, corporate greed won the day.
And I'm going to go out on a limb here, but I believe that there is a segment of this country who so hate what she stands for, that they will stop at nothing to vilify her reputation and put her "in her place".  The arrogant, insolent Elites of this country, cannot abide a simple, "countryfied" woman from the South who through hard work, persistence, and a faith in God, is able to build a dynamic and hugely successful business.  She couldn't have possibly "built that herself"!  And because she did, they are gleefully and delightfully tearing it all down.
What a sad and disgusting society we've become when we will not give someone forgiveness when they ask for it.  Whether you believe in God or not, there is a place and a need for forgiveness.  For me, it comes down to this:  how can I expect God to forgive me for all the wrong things I've done or said, if I cannot forgive another?  And if you need to take God out of the equation, then ask yourself this:  If you cannot find it in your heart to give Paula Deen another chance, are you willing to accept the same ruthless and intolerant treatment the next time you step outside the line?  Think about it, my friend.  It's only a matter of time before you offend someone, and which reaction do you want ... mercy or callous cruelty?

Isaiah 44:22     "I have blotted out your transgressions like a cloud and your sins like mist; return to me, for I have redeemed you."