Recommendation: Honor Flight: A Movie About The Greatest and The Humblest 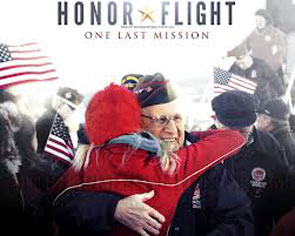 In the aftermath of the Memorial Day weekend, I am left with emotions that are so near the surface that tears are a constant threat.  Last Monday evening, I just happened to catch a fleeting comment on one of the talk shows about a film/documentary called Honor Flight.  (Click on the highlighted link to see the trailer... but you better have kleenex handy!) The host mentioned that the film was available on Amazon and I thought perhaps this would be the perfect way to end the day and to pay tribute to those who have served so valiantly on behalf of the American people.
The commentary on the movie said it documented an organization in Wisconsin who took on a project called "Operation Resolve", which consisted of escorting a group of WWII veterans to see their memorial in Washington D.C.  The cost to rent the movie on Amazon was only $3.99 and I thought it might be a sentimental and nostalgic trip down memory lane.
I certainly got more than I bargained for.  The movie is told by a man, who like so many of us children of WWII vets, never knew his father's story.  As Joe Dean accurately tells it, these were ordinary men who were, in reality, plucked off America's farms at the age of 18 or 19 to save the world.  They saw the brutality of war like no other generation, and so many of them died on the beaches of Normandy, or on the island of Iwo Jima.  They saw the unspeakable inhumanity of man as they liberated the concentration camps.  They saved Europe from the tyranny of Hitler and stopped the savagery of Japan in the Pacific theater.  Then they came home without fanfare, hugged their mom and dad, and went to work rebuilding this nation.  The photos and mementoes got buried in basements, and the memories and nightmares were tucked away, never to be spoken. 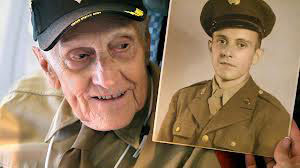 Joe's own father, he would discover, was a young untested doctor, who soon was elbow deep in the horrors of war in the Philippines.  As he contemplated his father's legacy, he heard of a man in Florida who was renting a plane to take these unsung heroes to see the new WWII Memorial in Washington, D.C.... at no charge to the vets.  They had never asked to be recognized, but they deserved to see the monument that celebrates their bravery and heroism.  Joe wanted to do something like that for the veterans of Wisconsin.  When he heard the astounding statistic that we are losing more than 900 of our WWII vets every day, he knew he had no time to lose.
The film goes on to show his journey of raising money to fund this enormous project .... and Joe dreamed big!  He wanted to be able to fill a 747 with veterans and at no cost to them.  They came home, never asking or expecting anything in return.  And now it was time that we, who inherited a free world from them, give something back in return.
Besides needing to raise nearly a quarter of a million dollars to fly all the veterans, (who began signing up in such numbers that Joe needed three 747s!), his organization would also need "Guardians" to accompany the veterans, many of whom are wheelchair-bound.  These volunteers are required to pay their own way, but what an honor to accompany a veteran and hear their story and see their reaction to their Memorial!
Needless to say, the film introduces us to some memorable men; many are quiet and introspective; others are colorful and animated --- all of them will touch your heart.  Whether it is the veteran who spent years in a Nazi prison camp, and weighed only 75 pounds when he was liberated; or the vet who is in the beginning stages of Alzheimers, but wanted to share his heart-breaking memories of Iwo Jima; or the veteran who was fighting cancer, but put off his chemo treatments for what he knew would be his only chance to see the Memorial --- they all were so grateful and moved to see that the nation had not forgotten their sacrifices.  For many of them, this was the first time since WWII that they had been in a plane! 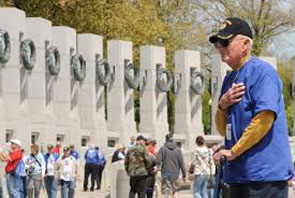 Then the film shows us the reaction of these veterans as they see the WWII Memorial for the first time, and you can still see the humble character of each man, as they cry for those who are not here to see it with them.  "The ones that didn't come home are the heroes."  You can see it in their eyes; these men have kept silent about their experiences for so long, and it is all coming back in memories of comrades who died in the hell of war; young men that didn't get the chance to live the full lives they've enjoyed.  It's as if they are experiencing this for all those lost on foreign shores.
But perhaps the most touching aspect of all was the outpouring of love and respect given to them by family members, many who had never heard the stories long buried.  After an exhausting and demanding 20 hours of flight time and touring of the Memorial, the veterans are treated to "mail call" on their return flight home.  Each veteran received an envelope filled with letters and cards made by children, grandchildren and great-grandchildren, thanking them for their service and telling them they were heroes.  There wasn't a dry eye on that plane... or in my living room.  But that wasn't the end of the story.
As their plane touches down, the worn-out veterans deplaned to a raucous hometown celebration.  As they shuffled or wheeled through the airport, they ran a love-filled gauntlet of family members, school children and townspeople waving American flags and home-made signs, thanking them for their service and recognizing their contribution to this great nation and the world!
This is a film that will touch your heart and call you to action.  My own father, who served as a tailgunner in the Pacific, passed away before he was able to see the Memorial in D.C.  But I am sending in my application to be a Guardian and accompany another veteran, before he, too, misses his chance.  These veterans are now well into their 80s and 90s and we don't have too many more opportunities to commemorate their sacrifice and service.  It is a way for me to honor my father and to show these men that I know what they accomplished for the free world.  They truly are THE GREATEST GENERATION!

For information on how you can donate, volunteer, or find your local "hub" for Honor Flights, please visit this link for information.

Galatians 5:13     "For you were called to freedom, brothers. Only do not use your freedom as an opportunity for the flesh, but through love serve one another."