This Church Takes A Season for Discernment

I was both surprised and encouraged to read a report on the Christian Post website that a mega-church in the Houston area has taken the unprecedented step of considering withdrawing from their denomination.  The reason?  First Presbyterian Church of Houston cites "a drifting away" from core theological principles as their justification for a "time and process of discernment". 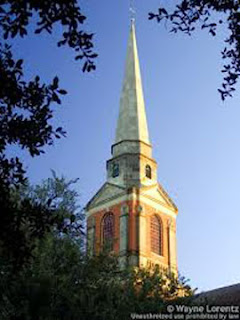 First Presbyterian is home to 3,600 members and was founded in the early nineteenth century.  The fact that they are contemplating dismissal from the Presbyterian Church USA (PC USA) is no small matter.  It might be natural to assume that such hot button issues as gay/lesbian clergy are at the heart of their decision; indeed, PC USA voted to allow openly gay clergy in May of 2011, and just this past summer, PC USA narrowly defeated a motion that would create a path to same-sex marriages. But First Presbyterian Church senior pastor Jim Birchfield says issues over homosexuality and the church aren't what's pushing his congregation to consider dismissal from the denomination.
"No, at this point it's really not about gay marriage. It's really more about the fundamental differences in how we interpret scripture and how we view the nature and work of Christ."
As you can see, this pastor has the courage to stand up and say what many of us are feeling and noticing.  The Modern Church has taken a subtle and circuitous route away from the founding tenets of the Church.  Instead of adhering to the Great Commission of evangelizing and planting new churches, (given to all Christians by our Lord and Savior), the Modern Church is now more interested in dumping this old paradigm for a new, progressive and inclusive doctrine that doesn't offend anyone.
Pastor Birchfield cited the following distortions by PC USA as the impetus for his church's time of discernment:
•  In 2001, the General Assembly (GA) of the Presbyterian Church defeated a motion to declare the “singular saving lordship of Jesus Christ" – believing that such a statement would be disrespectful to other religions.
•  In 2012, the GA passed a resolution encouraging participation in the “Words Matter” project, which seeks to eradicate words like Lord, Lordship, and King – as well as terms which provide such contrasts as that between “light and dark” and terms such as “spiritual blindness” which could be seen as offensive.
•  According to a survey taken and published by the PC (USA), only 41% of the 1,500 pastors who responded to the survey agree that only followers of Jesus Christ can be saved.
In addition, Pastor Birchfield referenced major statistics that show just how far away from the historical mission of the Church his denomination has wandered.  It would be interesting to see a report on ALL churches to see if this trend is national and across denominational lines.  My guess would be that these numbers are reflected across our land:
•  In 1983 there were 50,785 child baptisms in the PC USA. By 2011 that number had dropped to 21,422 child baptisms, a decline of 58%. Similarly, in 1983 there were 16,996 adult baptisms in the PC USA. By 2011 that number had dropped to 5,740 adult baptisms, a decline of 68%.
How many churches across this land are seeing these same kinds of "politically correct" changes?  It is not a matter of how big or small your church is .... if a Mega-Church of 5,000-plus members is diminishing the authority of Scripture, denigrating the nature and deity of Jesus Christ, or broadening their concept of salvation to include redemption from other gods, then it is not fulfilling its mission as originally and historically intended:  to take the gospel of Jesus Christ (not Allah or Buddah) to the world!
And how sad that more pastors and church leaders do not have the fearlessness that Pastor Birchfield does.  My wise Pastor recently told me that God had revealed to him that He was "removing the gray" from those who would see.  In other words, very soon, things are going to become quite clear; they will be black and white, and we, the Universal Church, is either going to reflect His tenets and principles, or there will be those led astray into apostasy and deception.  The Church must make up its mind; the time for riding that politically correct line is over.
That time has come for Pastor Birchfield, and he can no longer abide the "grayness" in his denomination; that questionable theology that obscures the Truth.  He and his congregation will soon take a vote to decide where they stand.  At least they see the pitfalls and errors of abandoning God's Word.  If only Believers throughout the country would subject their church doctrine to the same scrutiny; we might see a renewal of righteous faith sweep the land.

2 Peter 2:21     "For it would have been better for them not to have known the way of righteousness, than having known it, to turn from the holy commandment delivered to them."