It is nearly mind-boggling when I contemplate all the miscarriage of power that we are seeing coming from Washington D.C.  From the treachery that characterizes the Benghazi affair, to the outright usurpation of authority in the IRS targetings, to the blatantly un-Constitutional seizure of phone records from journalists ---- it all reeks of an Administration that is legally out of bounds, and morally out of control.
But will the American people demand that those who are responsible be held accountable?  No matter how high up the chain of command it goes?  Or will we allow ourselves to be mislead by outrageous and ridiculous talking points such as "we were unaware" or "this was undertaken by one or two rogue employees who have already been dealt with"?  Regardless of the same old lame excuses that are trotted out, one thing is clear:  the unconvincing explanations are designed to make us believe these issues are unimportant, inconsequential, overstated, and in the past. 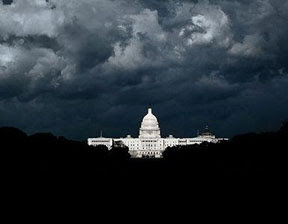 And why not employ these devices?  They've worked so many times before!  Countless Executive Orders have been passed with nary a peep out of the American people.  Covert operations are never questioned and associations with Enemies of the State proceed unhindered.  Why worry about these itty bitty scandals?
But this time, the rapid exposure of so many offenses at once, along with the legal and moral implications may be too much to push over on the sheeple.  It's almost as if they got careless about covering their tracks; or perhaps they've used the Olinsky playbook too many times and their modus operandi is too recognizable.  Whatever the reasons, we've got a peek behind the curtain and the Wizard's true identity has finally been revealed.
So now we are faced with a very important decision.  Do we let the Wizard slip back behind that curtain of power and obfuscating rhetoric? Or do we expose all the dirty laundry and let the chips fall where they may?  I truly feel this is the defining moment of our age.  Whether we continue as the "Home of the Brave and the Land of the Free" might just hinge on how these immoral indiscretions are handled by the Media, our Elected Representatives, and yes, even our Churches.
You know, it used to be that our Churches held those in Authority accountable.  After all, nearly every Christian knows the Romans 13:1-2 passage that declares all authority is appointed by God and we are to subject ourselves to their governing.  But we must also take into account Acts 4:19 in which we are to ask, "Whether it is right in the sight of God to listen to you more than to God, you judge."  Furthermore, the only circumstance that disobedience to authority is justifiable by Scripture, is if it conflicts with the laws of God. Authority should be cooperated with except in those situations where laws depart from the basic moral and righteous principles of God's Word.  So what do you think?  Do these scandals meet that criteria?
As God's obedient servants, shouldn't Pastors and flock alike, be mindful of such un-Godly misdeeds and act accordingly, submitting all concerns to the One who created such authority?  Yet our Church leaders remain silent, so our authorities give no credence to their moral obligations.  We must never forget that God can use our prayers for those in authority, to either change their heart or remove them from power entirely. God reserves the right of administering discipline and reproof to those who represent His authority.  Have we forgotten that we can go to God with our grievances in prayer?  There is one thing that I know for sure:  I trust Him to handle all this mess more than any Congressional Committee or Special Investigative Panel.  It's time to get on our knees!