The Gosnell Verdict: Abortion on Trial

I can honestly say that I find no joy in the "Guilty" verdict of Kermit Gosnell.  Whatever his punishment, whether the death penalty or life imprisonment, it will not atone for his diabolical methods in ending the lives of innocent babies.  May God forgive me, but I want this man to feel the pain and the terror that he inflicted on those blameless newborns.  I cannot find it in my heart to have compassion for anyone who could so easily snuff out the existence of live babies, and in such gruesome ways.
If this is not a wake-up call for this Nation to decry the inhuman act of abortion, then I'm not sure there is any hope for us.  And if one finds the killing of 20-week-old fetuses disturbing, how can there be any justification for the elimination of any fetus, no matter the age?  We must not diminish the act of abortion no matter the stage of the fetus.  And we must keep in mind this fact: the result is the same for the baby whether it meets its end in or out of the womb; in a shabby clinic like Gosnell's or a brand new Planned Parenthood facility. 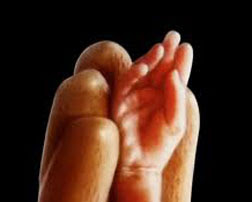 If we have any soul left in this country, we would realize that the picture presented in Gosnell's clinic was not an isolated incident.  The methods might be more horrendous, but the results are the same ... do you really think these were the only aborted babies in this country that were capable of surviving or living successfully?  Abortion has become such an accepted part of our culture that we too easily dismiss the fact that Death is the desired end result.  What does that say about us as a country?
To me, it says that we have lost our way.  We have deliberately disregarded God's Word and His commands, thereby losing our moral certainty of what is right and wrong.  We have become easily persuaded to commit evil practices and have denied the importance of the sacredness of life.  The consequences of such unprincipled decisions can be seen in the quality of our culture.
Before abortion was made legal-on-demand (pre-1973), this nation enjoyed liberty, prosperity and God's blessings.  Since that fateful day that Roe v. Wade became the law of the land, we have seen a steady slide into moral decay, with teen pregnancies on the rise; sexual decadence openly on display; the dismantling of the family; and corruption and vice abounding in every segment of our society and government.  We replaced God's Word as our guide, substituting our own counsel or that of a government entity.  When we no longer declare God's commands to be Absolute and Inviolable; never to be broken, we have set ourselves up for a gradual and continuous loss of both freedoms and life.  And the slide is not over!  Babies are not the only ones being proclaimed expendable --- soon the Affordable Health Care Act will assert that the lives of the elderly, the infirm and the non-producers are disposable.
Hopefully, this guilty verdict will bring to light the evilness of this practice.  Perhaps the nation will begin to question the image they've been sold; that abortion is not the sterile, painless and inconsequential procedure it has been touted.  And while I applaud pro-life groups that condemned Gosnell's practices, they still won't condemn the actual act of abortion; instead they call for more regulation and the exposure of more abortion clinics that are violating laws.  That's just putting a bandaid on America's sin!
The Vice-President for Communications of Planned Parenthood released this statement:  This case has made clear that we must have, and enforce laws, that protect access to safe and legal abortion, and we must reject misguided laws that would limit women's options and force them to seek treatment from criminals like Kermit Gosnell.  Notice that it is all about the options for women.  Where are the choices for the unborn babies?
Man's justice may have been served in this case, but until the unsacred ritual of Abortion is ended in this country, we will continue to do injustice to God's commands .... and America we will continue down this road towards ruin and defeat.

Ephesians 5:11-12      Take no part in the unfruitful works of darkness, but instead expose them. For it is shameful even to speak of the things that they do in secret.