The Wikipedia definition of Artificial Intelligence sends chills down my spine.  According to the online resource, major AI researchers and textbooks define the field as "the study and design of intelligent agents", where an intelligent agent is a system that perceives its environment and takes actions that maximize its chances of success.  Sound like science fiction and the stuff of movies?  You betcha!  But it is also our fast-approaching reality!
Ray Kurzweil, a leading scientist and strong proponent of "Artificial Intelligence", truly believes that we are less than two decades away from creating consciousness in an artificial being.  Think about what that really means .... he has been charged by Google to develop natural language understanding.  To put that into terms you and I can understand, it looks like this .... Search engines have moved beyond just finding keywords.  But Kurzweil and Google (among others) want to be able to read all the billions of web pages and book pages for semantic content. 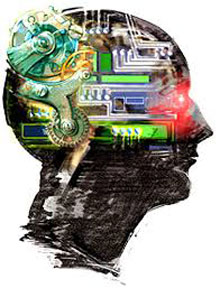 In other words, if you write a blog post, your intent is to express what you think; what you feel.  Let's face it, you’ve got something to say, and you’re not just creating words and synonyms. Kurzweil stated, "We’d like the computers to actually pick up on that semantic meaning."  His excuse is that people could then ask more complex questions.  (Here's where I put my tin foil hat on).  I think this kind of technological advancement has more sinister overtones.
Kurzweil has teamed with fellow researcher, Jeff Daniels, who has developed a system he calls deep learning.  The self-proclaimed subtitle of his website, deeplearning.net, is "moving beyond shallow machine learning since 2006!"  He goes on to proclaim that "Deep Learning is a new area of Machine Learning research, which has been introduced with the objective of moving Machine Learning closer to one of its original goals: Artificial Intelligence."
Just go to any movie theater and watch the previews.  PLW and I joined our neighbors in going to see Tom Cruise's latest sci-fi, futuristic movie, Oblivion.  All but one of the litany of previews touted some form of Artificial Intelligence that sought to rule the universe.  The message was clear.... man is no match for the superior "brain power" of Artificial Intelligence; we will be easily conquered and will become subservient to our AI masters.
Think it can't happen?  Listen to Kurzweil's answer, when asked what would be the outcome if he is actually able to create a "Google brain" that could understand the meaning behind the words we type:  "I’ve had a consistent date of 2029 for that vision [of computer intelligence]. And that doesn’t just mean logical intelligence. It means emotional intelligence, being funny, getting the joke, being sexy, being loving, understanding human emotion. That’s actually the most complex thing we do. That is what separates computers and humans today. (Oh, how deceived he is!) I believe that gap will close by 2029."  If Hollywood can think it up and make it look real on screen, do you really doubt that scientists aren't further down that trail?
Still not convinced?  Kurzweil goes on to make his case:  "We can now see inside a living brain and see individual inter-neural connections being formed and firing in real time. We can see your brain create your thoughts and thoughts create your brain. A lot of this research reveals how the mechanism of the neocortex works, which is where we do our thinking. This provides biologically inspired methods that we can emulate in our computers. We’re already doing that. The deep learning technique that I mentioned uses multilayered neural nets that are inspired by how the brain works. Using these biologically inspired models, plus all of the research that’s been done over the decades in artificial intelligence, combined with exponentially expanding hardware, we will achieve human levels within two decades."
Here is where it gets real scary!  Kurzweil is a strong proponent for what he calls this "exponential growth of knowledge" and is focused on controlling the neocortex part of our brain (where we do our thinking).  He even goes so far as to trying to understand why some people (like me) are so resistant to accepting this kind of research.  He seems to think that people who are resistant have disorganized neocortexes (read there is "something else" that prohibits us from being manipulated).  See if you can guess what that "something else" might be from this statement he made in reference to his friend Steve Jobs (of Apple fame).  Jobs famously proclaimed, “Death is very likely the single best invention of life. It’s life’s change agent.” 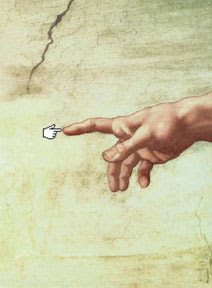 Kurzweil, has a very unique perspective on Jobs's thought.   "I call this a deathist statement .... Religion, which emerged in prescientific times, did the next best thing, which is to say, ‘Oh, that tragic thing? That’s really a good thing.” We rationalized that because we had to accept it. But in my mind death is a tragedy. Our initial reaction to hearing that someone has died is a profound loss of knowledge and skill and talents and relationships."
See what a lack of God does for you?  Because my initial reaction to hearing that someone has died is, "What was it like standing in the presence of Jesus?"  The irony of the whole Artificial Intelligence system is that the researchers and scientists see only the significance of the human brain.  They deny the plausibility of our soul and connection to a living God.  So while vehemently denying the existence of God, they are, in effect, trying to play God.  (Boy, are they in for a surprise!)
I may not be able to fight their system on a scientific level, but I have to ask this question .... in light of how I plan to spend eternity versus their strategy for expanding knowledge, who is really the intelligent one?

2 Timothy 3:1,7      "But understand this, that in the last days there will come times of difficulty. For people will be lovers of self .... always learning and never able to arrive at a knowledge of the truth."