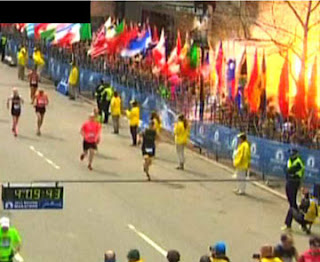 I hesitate to even comment on the tragedy that occurred at the Boston Marathon yesterday.  Two explosions resulted in multiple deaths and horrific injuries to bystanders.  It should go without saying, that I am praying for those who lost their lives, and for those who whose lives have forever been changed from yesterday's event.  This post will be short because I do not want to give erroneous information or false details.  At this time, I just want to give you my impression of the initial coverage.
As always happens, news sources are sometimes quick to jump to conclusions in their rush to be the first with the exclusive news.  And this is what was disturbing to me.  I am writing this just three hours after the detonation of the blasts.  The New York Post has reported that a Saudi national is being held as "a person of interest" at a local hospital.  Nothing further is known as I type these few words.
Yet within one hour of the blasts, Shepperd Smith at Fox News reported that a suspect was in custody.  He then went on to question whether this could be a "local domestic cell" in the image of Oklahoma City or Waco.  Really?  Is the MSM, (in which I include Fox News) that eager to blame domestic terrorists, without a shred of evidence?  He even went so far as to point out it was "Patriot's Day" in Boston and perhaps this terrorist had an axe to grind.  He stopped just short of mentioning the Tea Party.
Then there was Chris Matthews on CNN's Hardball:  "Normally, domestic terrorists, people tend to be on the far right, well that’s not a good category, just extremists, let’s call them that."  He, too, is willing (perhaps even wanting) to consider that this heinous act was perpetrated by an American citizen that doesn't share his political ideology.  I just find it maddening that he never seems to consider that these monsters could be someone other than an American conservative that hates our country.
There were witnesses who had served in Iraq and mentioned the distinct smell of cordite, the evidence of ball-bearings, and lower extremity wounds; all consistent with IEDs.  It is too early to pinpoint a specific suspect, and we may yet find out that the perpetrators are Americans or local terrorists.  And whoever is responsible should receive justice and punishment to the fullest extent of the law.  I am just disheartened that the first light of suspicion was so eagerly shone on "domestic terrorists."  I am getting tired of so-called journalists airing their opinions and emotions, instead of reporting facts.  I don't care to hear Shepperd Smith or Chris Matthews spew their personal hunches or theories.  Their job is to tell us what is happening.  If they don't know, then their job is to say that --- not offer up their delusional fantasies.
All this being said, it is a reminder to us all that our homeland will never be safe from terror events such as what we witnessed in Boston.  It is our present reality that Evil abounds and we are all possible victims and quite vulnerable.  Yet we also observed great courage and compassion in the midst of this demonic plot.  Strangers provided assistance to the injured, and officials acted quickly to shut down cell phone service to inhibit any further detonations.  Medical personnel were quick to respond and police were able to gain control over the terrified spectators and escort them to safety.  The worst of Satan's plans cannot defeat the goodness that resides in humanity.  The days to come will provide more answers.  In the meantime, let's pray that God's mercy will reign on this country.

Psalm 37:9     "For evildoers shall be cut off: but those that wait upon the Lord, they shall inherit the earth."