What's In That Package? 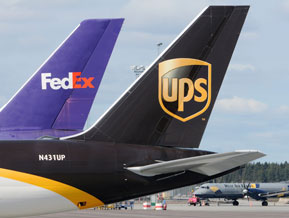 Apparently, America's two biggest shipping companies are finding themselves under the microscope in a new line of federal probing.  Both FedEx and UPS have become embroiled in a controversial reach by the Feds.  What is their alleged crime?   They did not flag shipments of illegally prescribed drugs the companies say they had no way of knowing were in their possession.  Furthermore, criminal charges could be coming against the carriers, even though the government has not alleged any deliberate wrongdoing by either company.
Evidently, FedEx has been compliant in the past with helping federal authorities crack down on criminal activities, but a spokesman says this time things were quite different.  Patrick Fitzgerald, of FedEx states, “What is unusual and really disturbing is it became clear to us along the way that FedEx was being targeted for some level of criminal activity as it relates to these medicines that are being shipped from pharmacies, and we find it to be completely absurd because it’s really not our role.  We have no way of knowing what is legal and not within the packages that we’re picking up and delivering in this situation.”
So what's really behind this smokescreen?  “At the heart of the investigation are sealed packages that are being sent by, as far as we can tell, licensed pharmacies. These are medicines with legal prescriptions written by licensed physicians. So it’s difficult for us to understand where we would have some role in this. We are a transportation company that picks up and delivers close to 10 million packages every day. They are sealed packages, so we have no way of knowing specifically what’s inside and we have no interest in violating the privacy rights of our customers,” Fitzgerald said. 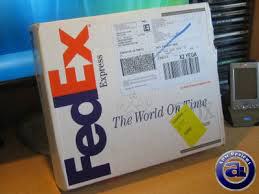 Bingo!  I think he may have just touched on what's really going on here.  In addition to the unrealistic expectation that the federal government seems to have for the companies to know what’s in every package, Fitzgerald said protecting the rights of customers is paramount and the issues go hand-in-hand.  This is just one more attack on the privacy rights of individual citizens.  "This [alleged pharmacy scam] really has a chilling effect. It has the potential to threaten the privacy of all customers that send or receive packages via FedEx because the government is assigning a role on us as law enforcement or taking on their role in a way that is not appropriate,” Fitzgerald said.
It's not as if FedEx is refusing to help stop illegal activity.  They have gone as far as offering to stop doing business with any pharmacies that the government suspected to be involved in illegal activities. The Justice Department declined, citing the potential for the pharmacies to sue over a lack of due process.  What about any individual who happens to get caught in the crossfire?  What if an innocent citizen is falsely accused of illegal activity for receiving a perfectly legal shipment?  Will they have the ability to sue the government over a lack of due process?  Somehow, I think not.
But here's the absurd reality of this situation:  It leaves FedEx and UPS with the task of stopping illegal shipments from sources the government will not divulge.  Fitzgerald goes on to explain, “The comparison that we’ve made is a no-fly list. It’s as if the government were to go to major commercial airlines and accuse them of some level of criminal activity if they were to allow somebody on the no-fly list onto one of their planes --- without providing them a no-fly list.  What we want here is the no-fly list for online pharmacies. If they are aware of some level of illegal activity by some number of pharmacies, simply provide us that list and we will stop providing service. It’s a very simple solution.”
But I think we are all beginning to get the picture.  It's not really about illegal pharmaceuticals.  That's just smoke and mirrors.  It's just another tactic for setting a precedent to strip us of still more privacy.  And Fitzgerald questions why no other private carriers are part of the probe.  He's not yet ready to allege that it is a scheme to boost the financially strapped U.S. Postal Service at the expense of private competitors.
Now here's the bad news and the good news .... UPS is currently negotiating a settlement with the government, but FedEx is fighting this all the way.  “Settlement is not an option for us when there’s no illegal activity on our part,” Fitzgerald said.  It will be interesting to see how long they can hold out while protecting our privacy, and what steps might be taken to weaken their position.  I applaud FedEx for their bold stand.

Isaiah 59:14         "So justice is driven back, and righteousness
stands at a distance; truth has stumbled in the streets, honesty cannot enter."