The Tourniquet That Saved Lives

If you are new to my blog, then I urge you to read a post from last August, titled Would You Know How To Handle A Medical Trauma?  And if you are a loyal follower, then please re-read it.  In this post, I talked about a class that I attended in which I learned how to use a SOF Tactical tourniquet.  As it turns out, this tourniquet is responsible for saving dozens of lives at the Boston Marathon last week.
Because there were so many members of the military on hand, they had in their possession these life-saving devices, and if you go back and watch some of the video from the terror attack, you can actually see these tourniquets being applied.  And various news sources were quick to take note.  Hopefully, their reporting will make more people aware of this critical devices, and take steps to obtain their own.
FoxNews reported, "Although tourniquets have been used to stem blood loss since at least the time of the Roman Empire, modern military surgeons had grown to doubt it. There were no good studies proving their benefit. And there was a common belief that some tourniquets could do more harm than good, cutting off blood and oxygen to limbs and resulting in amputations."  But I can tell you that after my several visits to our Wounded Warriors, the tourniquet has saved lives that would have been lost in past wars.  And Nicholas Yanni is now a believer. 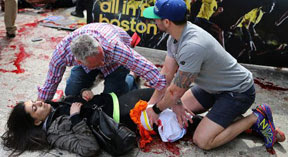 Fox went on to report that Nicholas, who is from Boston, was with his wife and friends watching another friend cross the finish line when the explosion occurred. Yanni's wife had an injury to her lower left leg. Another woman with them had a leg injury, too. Yanni ducked into a nearby sports store for T-shirts that they tore to create a tourniquet.  The blood flow was stemmed until she was transported to Tufts Medical Center, where repairs were made to her lower left leg; a result of shrapnel from the blast.
Brennan Mullaney, a Captain in the Army Reserve, served 15 months during the “surge” in Iraq, and is fully aware of the damages to life and limbs from IEDs.  He was running in the Marathon, when his military experience was put into effective use.   “When we’re deployed, we all carry tourniquets — nice ones,” said Mullaney, now a graduate student at Tufts University. “When you see missing limbs, the first thing all of us know [to do] is to tie a tourniquet.”
The Military Times reported that Hospital workers saw “many patients come in with tourniquets. Some had multiple tourniquets. They definitely saved patients’ lives,” said Michael Yaffe, a trauma physician at Beth Israel Deaconess Medical Center in Boston, where 24 patients were treated.  “A lot has emerged from the Iraq and Afghan wars,” adds Yaffe, who is a lieutenant colonel in the Army Reserve. “A tourniquet is a standard piece of equipment for a soldier to carry now. They might wear one out on an assignment and not tighten it unless they have to.”

And that's the point I want to make to you.  Although make-shift tourniquets of T-shirts were used in Boston, the better solution is to have a SOF tourniquet handy.  As I learned in the trauma class, a tourniquet should be a standard piece of equipment that you keep in your trauma kit.  And that trauma kit should be with you at all times!  Because there were people who adhered to this principle, countless lives were saved in Boston.
This is something simple you can do to make sure you are always prepared.  But I want to further advise you to be sure and find out how to properly administer a tourniquet.  Be responsible!  But, for once, the media was the source for disseminating valuable information, and I advise you to take notice!

Psalm 107:19-21    "Then they cried to the LORD in their trouble, and he saved them from their distress.  He sent forth his word and healed them; he rescued them from the grave.  Let them give thanks to the LORD for his unfailing love and his wonderful deeds for men."