You might have seen the report by FoxNews reporter Todd Starnes, that the U.S. Army is directing troops to remove a Bible inscription that a vendor etched into the serial numbers of weapon scopes.  According to the report, the scopes were made by Trijicon and referenced New Testament passages in John 8:12 and Second Corinthians 4:6. The verses appeared at the end of the scope serial numbers as “JN8:12” and “2COR4:6.” 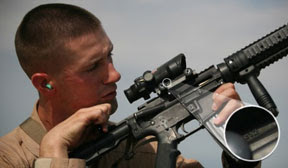 Soldiers have received written directives to remove the Biblical references utilizing a Dremel type tool, and then following up with black paint to make sure that no remnant of the verses are visible.
Army spokesmen have attempted to rationalize the directive by saying that the inscriptions were added without the Army's approval; therefore they did not meet some unspecified "requirement" of the contract which was generated.  However, a representative of Trijicon stated that the Biblical references have always been on the scopes and were not illegal.  And it should not be surprising that this issue is suspected of being raised by an individual who is "not a Christian."  Of course it was!
So, along with many soldiers, I am asking what this has to do with their mission?  How can a Bible verse possibly interfere with a soldier's ability to kill the enemy?  Once again it appears as if someone was "offended".  But why is it always Christianity that offends someone?  What is it that the military could possibly be scared of when it comes to faith?
Well, consider this .... a recent Christian Post article reported the following about a slide presentation being shown to military personnel:   A U.S. Army Reserve Equal Opportunity training brief describes 'Evangelical Christianity' and 'Catholicism' as examples of 'religious extremism,' according to the Archdiocese for the Military Services and the Chaplain Alliance for Religious Liberty, who shared a copy of the documents with The Christian Post.
"The number of hate groups, extremists and anti‐govt organizations in the U.S. has continued to grow over the past three years, according to reports by the Southern Poverty Law Center. They increased to 1,018 in 2011, up from 1,002 in 2010 and 602 in 2000," reads the first page of the slide presentation labeled “Extremism & Extremist Organizations.”
Listed alongside “extremist” groups and organizations like the Klu Klux Klan and al-Qaida, the U.S. Army slideshow has “Evangelical Christianity” as the first bullet, followed by the Muslim Brotherhood, Ultra-Orthodox Judaism and farther down on the slide, Catholicism.
And if this is not enough to sufficiently offend you, then consider this addendum to the above slide.  It reads as follows .....  Extremism is a complex phenomenon; it is defined as beliefs, attitudes, feelings, actions, or strategies of a character far removed from the “ordinary.” Because “ordinary” is subjective, no religious group would label itself extreme or its doctrine “extremism.” However, religious extremism is not limited to any single religion, ethnic group, or region of the world; every religion has some followers that believe that their beliefs, customs and traditions are the only “right way” and that all others are practicing their faith the “wrong way,” seeing and believing that their faith/religion is superior to all others.
So here's my question --- why is Christianity considered "Extreme" and radical Islam is not?   As far as I can tell, the fact that I believe Jesus is "the only way" does not hurt anyone.  But the very definition of "jihad" is "a holy war waged on behalf of Islam as a religious duty."  If we are to believe that the "ordinary" expression of Islam is peaceful, what could be more removed from peace than a holy war?  I just would like someone to explain to me why Christians are the only ones who seem to be so easily accepted as "extreme"!
And what is the ultimate goal for the military in demeaning the Christian faith among their ranks?  And how will the removal of any references to Jesus fundamentally change the souls of those who fight for liberty and the security of this nation?  One thing is for certain ... We live in a fallen world; therefore there will always be wars.   And where war exists, there will be a need for a military.  I shudder at the thought of a military without Jesus at its heart.  In the midst of war, there is much darkness;  and no where is His light more needed.  Let's pray that the forces of evil can be turned back.

2 Corinthians 4:6    "For God, who said, “Let light shine out of darkness,” made his light shine in our hearts to give us the light of the knowledge of God’s glory displayed in the face of Christ."