Oops! He Did It Again!

Just a quick post to give you something to think about .... did you know that on the evening before millions of Americans took off work to celebrate Good Friday and the Easter weekend, that yet another Executive Order was written and implemented?  That's right; it's become nearly routine that every time we are distracted by a holiday, we wake up to another directive administered from the shadows.
This time, the official title of this EO is Establishment of the Presidential Commission of Election Administration.  According to the official White House release of this Presidential Order, the mission of this appointed Commission will be to "identify best practices and otherwise make recommendations to promote the efficient administration of elections in order to ensure that all eligible voters have the opportunity to cast their ballots without undue delay, and to improve the experience of voters facing other obstacles in casting their ballots, such as members of the military, overseas voters, voters with disabilities, and voters with limited English proficiency." 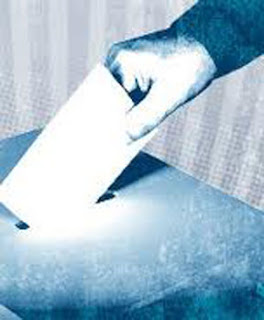 Now, I don't know about you, but I wasn't aware that our present system needed any manipulation.  And anytime the President of the United States decides to get involved in national elections by self-appointing a committee to make sure "all eligible voters" get to vote, it smacks of electioneering and over-stepping a bipartisan boundary.  This Executive Order boldly side steps any Congressional legislation or national debate, and creates a federal Commission (appointed by the President) that shall consider, ”the number, location, management, operation, and design of polling places; the training, recruitment, and number of poll workers;  the efficient management of voter rolls and poll books; voter education; and voting accessibility."
Critics of this move go so far as to say it is an effort to nationalize elections; to put into place election officials that would have a biased and prejudiced agenda in favor of the party that appointed them.  One local election official from Virginia had this to say: "The genius of American government is rooted in its separation of powers – not only between the branches of federal government, but also between the levels of government in general – state and Federal.  When we have a commission comprised only of individuals appointed by one man, from one party, from only one branch of the government, that will be setting rules and making suggestions as to how local elections should be managed it’s beyond alarming – it’s just plain wrong.”  As far as I'm concerned, wrong is too mild a word.
I'm one of those who were skeptical of the last election returns; was I really expected to believe that there were voting districts and even entire counties where Mitt Romney did not receive one single vote?  Really?  And now we have a Presidentially-mandated commission whose sole purpose is to oversee elections?
Some of the more, shall I say, disturbing "considerations" this Commission has been asked to look at are:
(iv) the efficient management of voter rolls and poll books;
(viii) management of issuing and processing provisional ballots in the polling place on Election Day;
(ix) the issues presented by the administration of absentee ballot programs;
(x) the adequacy of contingency plans for natural disasters and other emergencies that may disrupt elections.
Hmmm, we've managed to hold elections for lo, these 200-plus years, and now it is necessary to manage these issues?  Of course, it all looks and sounds legitimate and non-threatening when you read the legal language.  But when you read between the lines such as.....  "The Commission shall hold public meetings and engage with Federal, State, and local officials, technical advisors, and nongovernmental organizations, as necessary to carry out its mission" ..... it's those couple of extra words, as necessary, that are troubling to me.  Call me paranoid, but it makes me nervous that yet another Executive Order has slid under the radar and could effect the honesty of future elections.  The right to self-govern is a fundamental principle upon which this country was founded!

Isaiah 9:7      Of the greatness of His government and peace there will be no end. He will reign on David’s throne and over his kingdom, establishing and upholding it with justice and righteousness from that time on and forever. The zeal of the Lord Almighty will accomplish this.
Posted by Pam Kohler at 7:00 AM