Now that the final episode of the History Channel's stunningly successful The Bible has aired, what will be its legacy?  What is your lasting impression of the miniseries?  I was, at the same time, thrilled that this epic undertaking appeared to be sincere in the message it desired to impart, while apprehensive that it might be a distorted "Hollywood-ized" version of the Gospel.
I have to admit that I began watching it with a very critical eye; intent on comparing it with "the real Bible" and holding it to a standard of historical and Scriptural accuracy.  I longed for more details in some parts of the presentation; for instance I felt they missed opportunities in not exploring the story of Jacob's son Joseph, who is sold into slavery in Egypt by his brothers.  Joseph’s story presents amazing insight into how God sovereignly works to overcome evil and bring about His plan. After all his ordeals, Joseph is able to see God’s hand at work.  That might have been a valuable lesson to impart to the millions of people watching The Bible, wouldn't you say? 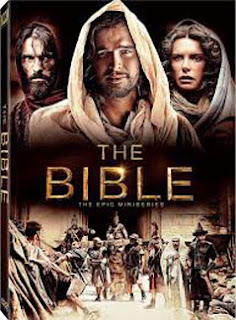 Another of the Bible's poignant moments that was overlooked was the Golden Calf incident. While Moses spends 40 days up on the mountain receiving God's laws, the Hebrew people melted down the golden objects they had carried from Egypt into a golden idol and worshipped it; merging the pagan practices they were familiar with [in Egypt] and the worship of the God they were just beginning to be re-acquainted with after centuries of slavery.  When Moses discovered their grievous sin, the result was three thousand men were killed that day. The next day, Moses went up and confessed the people's sins before God, asking for His forgiveness. God declared that the guilty ones would yet pay with their own deaths and be blotted out of His book.  That's a pretty important God principle!
Instead, I watched with my critical eye and was unhappy that the story of Samson was not only so prominent, but the depiction of his wife's death was inaccurate.  And it did not escape me that the producer's of the miniseries confused Persian leaders Darius and Cyrus in the story of Daniel and the Lion's den.   Of course the romantic view of Jesus's birth was not lost on me, nor the convenience of having the Wise Men and the shepherds all arrive at the same moment at the manger scene.  The narrative about John the Baptist's death was conspicuous for the absence of Salome's heinous request of her uncle/stepfather.  I could recount several other "forced" narratives and conversations between characters that do not find their reflection in Scripture.
But by the third episode, I began to have a different impression of the series.  I could barely keep up with the dialogue and action between the characters because I began to be interrupted by a continuous series of cell phone texts from my brother, whom I have been trying to reach for Christ.  The words I have spoken to him, and the letter I had recently written, (expressing my desire that he ask Jesus to become his Lord and Savior because I wanted him to enjoy eternal life) had resulted in some honest conversation and a spark of interest .... but now all the talking was coming from my brother's end!  He was interested in knowing more about the history of the Israelites and their relationship with God; about Daniel's faithfulness and about Jesus's call upon the lives of the disciples.
His questions were deep and soul-searching and there was an intense curiosity about this man Jesus and a growing acceptance that He was, at the same time, the Son of God.  His questions gave me the opportunity to present the Gospel in response to his hunger for knowledge --- instead of me pushing onto him my desire that he know and understand my faith.  Does that make sense?
By the time the last episode aired on Easter evening, he shared with me that he had watched The Passion of the Christ the previous week and had cried.  He also revealed that he now understood that Jesus died for the sins of all mankind; his included.  My fingers were typing messages as fast as I could get the words out, reaffirming his emotions and understanding.  He wants to know more and we have made plans to get together for dinner so he can ask more questions.  The miniseries and our cell phones have done their part; now it's the Holy Spirit's turn.  We live a couple of hours apart, but I would walk in my bare feet to reach him at this point!
So while I understand that The Bible is far from perfect in its facts and history; for the most part it is theologically sound.  And I have heard some discussion and doubts about the religious doctrine of the show's producers, Roma Downey and Mark Burnett, along with considerable questioning of their social views (gay marriage to be exact).  I will not make excuses for their possible shortcomings.  At this point, I don't really care.  As PLW so astutely pointed out to me, God can use anything to glorify Himself and push forward His agenda .... whether it be the dreams of an evil dictator such as Nebuchadnezzar, or a less-than-perfect five-part miniseries on the book of His Holy Scripture.
The thought dawned on me that I needed to be careful or I could become like the Pharisees and view every word and image of the series from a legalistic standpoint.  Perhaps God could actually use this flawed vessel of a TV show as a means to reach the millions of unsaved who watched it, such as my brother, and spark a yearning inside them that longed to know more of Him.  If The Bible could do that, then God can use it for His glory, and that is far more important than if Ananias was actually the one who baptized Paul, or if the baptism was done in the method of traditional Baptists.
As a Believer who views the Bible as the inerrant Word of God, I am willing to overlook The Bible's creative license in its unapologetic pursuit of spreading Jesus's message of eternal life through faith in Him.  I can only hope that God can use the combined flaws of the miniseries and this Sinner to reach the soul of my brother, and so many like him.  To God Be the Glory!

Romans 10:11    As Scripture says, “Anyone who believes in him will never be put to shame.”