The situation in Cyprus does not bode well for the rest of the world.  I'm not a financial wizard, but I'm smart enough to know that what happened to the citizens on this Eastern Mediterranean island could happen anywhere in this global economy.  Each troubled economy has their own problems and point of origins, but this unique solution could be applied across the board.
Here's Cyprus's story:  their failing economy required a bailout from the EU, (just another in a long line), but the consequences of this one held some foreboding news for unsuspecting Cypriots.  Over the weekend, a bank holiday was declared, and the good people of Cyprus woke up Monday morning to find out that the government had seized up to 10% of everyone's savings from their bank accounts ... without warning.  Bank deposit holders had no idea they would be footing part of the bill.  Panic ensued, there was a run on ATMs, and those funds were quickly depleted by mid-afternoon. 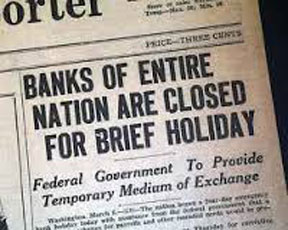 But there could be an even more mysterious reason behind this particular resolution.  According to The Guardian, it seems "there is a lot of Russian money in Cyprus, much of it from somewhat dubious sources. With the richer countries of the eurozone suffering from bail-out fatigue, there was resistance – particularly in Germany – to the idea that ordinary European taxpayers should be writing blank checks to Russian oligarchs who might have been using Cyprus as a money laundering destination.".  Whoa!  Is there more to this story than meets the eye?
According to an interview with Jim Sinclair, founder of The Sinclair Group (1977), and a respected precious metals specialist, as well as a commodities and foreign currency trader, this Russian money could be ex-KGB money!  To say that taking Russian money is a foolish idea is over-simplifying; but when you couple it with using Cyprus as the test model for bank account confiscation, you have a dangerous mix that is going to obviously explode.  Never mind the fact that normal everyday citizens are being hurt in the process, but now they must pay the price for the immoral business decisions of their banking officials, who, by the way, operated with the full approval of their government!  That seems to be a universal practice of all corrupt governments, doesn't it?
On the one hand, you have the Russian problem.  But is this also a foreshadowing of a solution other failed economies could utilize?  Will bank holidays and purloined deposits become a matter of policy for determining how other bailouts will be paid back?  And will the citizens of other troubled countries fear the same type of confiscation, and cause a global run on the banks?  People in Cyprus are protesting in the streets, and there's no end to the fear and anxiety.  Calling the theft of private funds a "tax" doesn't alleviate the hostility or rage towards the government.
But don't think that just because we are an ocean away, we don't face the possibility of similar "solutions".  In an article on KingWorldNews.com, Former Assistant of the US Treasury, Dr. Paul Craig Roberts, reported that our very own J.P. Morgan "now threatens the stability of the entire global financial system.  And if the Fed loses control and we collapse, Nothing and no one would be safe anywhere.”  Well, that's going to help me sleep tonight!
Dr. Roberts points out that the Student Loan problem in this country is a huge bubble ready to pop; and when it does, it stands to devastate our banking industry.  Combine that with the fact that we are an import-dependent country.  He states that we no longer produce our own manufactured products, clothes, or shoes anymore.  And these import items dwarf the import of oil or energy!  So the potential for what happens when these bubbles burst is widespread unemployment, and a rapid increase in inflation, and needless to say, we don't have an effective economic policy in place to deal with this kind of crisis!  We've heard this talk of economic gloom and doom for some time now, but the advent of the recent Bank Holiday adds a whole new level of trepidation.
That's why what happened in Cyprus over the weekend could be a warning sign for troubled economies around the world.  If you think your bank accounts, money market funds, retirement plans, IRAs, mutual funds or stock market portfolios are ‘safe’ assets just because they've been recommended by your financial adviser, then in the words of SHTFPlan, you are "playing Russian roulette."  That seems to be what the government of Cyprus did, and look where it got them!

Isaiah 56:11-12      Yes, they are greedy dog which never have enough. And they are shepherds who cannot understand; they all look to their own way, every one for his own gain, from his own territory.  “Come,” one says, “I will bring wine, and we will fill ourselves with intoxicating drink; tomorrow will be as today, and much more abundant.