You, Too, Can Become a Cyborg! 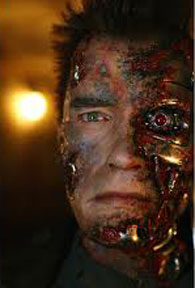 Remember how fascinated we all were with Arnold Schwarzenegger's portrayal of the cyborg known as "The Terminator"? That seemed so futuristic and incomprehensible; yet somehow incredibly possible; and if we were honest with ourselves, downright scary.  According to Wikipedia, cyborg is "short for "cybernetic organism", a being with both organic and cybernetic parts.  "The Terminator" took that term to a higher level than the more benign "Six Million Dollar Man" character of the 1970s.  But it has been common for fictional Cyborgs to play up a human contempt for over-dependence on technology, particularly when used for war, and when used in ways that seem to threaten free will.  It's that "free will" part of the equation that is now coming into question.
So, look out, it appears as if we all may soon have the capability to become cyborgs, ourselves.  It seems as though Google has created a device called Google Glass that lets you see and interact with the world around you without disconnecting from it.  It's called "Google Glass Explorer Edition" and according to a review on cnet.com, "The Glass headset is designed to be out of the way so it doesn't interfere with your activities. According to Google, it weighs less than most pairs of sunglasses. On the side is a touch pad for control, on top is a button for shooting photos and videos with the built-in camera, and there's a small information display positioned above the eye out of the line of sight."  The wearer will be able to shoot video footage, search the internet or send an email, all at the command of their voice.  Just one more device to feed society's addiction to technology, right?
Yet there are those naysayers that fear it could be used for something a bit more malicious.  It is the very features that are being touted as so innovative that have critics worried.  Just think about it:  the glasses have the ability to take pictures and shoot video footage and upload it instantly to the internet.  It doesn't take much thought to see that privacy issues come into play here.  (This is where our free will becomes compromised).  How do you know that person who appears to just be looking at you isn't actually filming you or listening in on your conversation and taping you?
According to an article on TheDailyMail.com, "Google already knows where its users are — by keeping tabs on where computer and smartphone searches originate — and what they are looking for."  Did you know that Google analyzes your emails sent to and from Google email accounts, photographs people’s houses and back gardens as part of its Street View mapping project, and — as the company admitted in the U.S. last week — has looted passwords and medical and financial information by snooping on unprotected wi-fi accounts?
Along with those controversial practices, Google will now know everything their users are looking at, at any given moment.  Can't you just see the dollar signs?  Retailers will be lining up to buy that kind of information --- what was the first thing on the shelf you looked at?  How many times did your eye return to a particular item?  And Google has never been shy about selling private information.
But it was the reviews provided to TheDailyMail by industry insiders that sent chills down my spine:  Scott Cleland, an internet analyst, called Google Glass technology 'creepy' and said it represented the ‘ultimate escalation of Google’s privacy invasion’.
He said: ‘Say you’re huddled in Starbucks with your spouse and someone next to you is recording your conversation on Google Glass.  Remember, the glasses have no storage capacity so all the information goes directly back to Google’s huge data centres.’
Nick Pickles, of the UK privacy campaign group Big Brother Watch, says Google Glass ‘makes CCTV cameras look trivial . . . the person next to you isn’t just a commuter any more, they’re a Google agent’.
Mark Hurst, of Creative Good, a New York company that specializes in improving customer experiences, sees a dystopian future in which Google will play all too prominent a role.  He predicts that ten years from now, if a company or organization wants to know if you have ever said anything they consider offensive or threatening, a single search query on Google’s database ‘will instantly bring up documentation of every word you’ve ever spoken within earshot of a Google Glass device’.

So are you still excited about the latest technological invention?  I'm sure that the younger generation will have no problems buying into it, while unwittingly giving up every ounce of their privacy to Big Brother.  But here's the fly in the ointment .... you and I will not be able to escape the invasion of our privacy, if all the "useful idiots" are wearing these contraptions!
One Seattle bar has already announced plans to ban Google Glasses in its establishment, but, hey, it's Seattle, "the New York of the West Coast".  How long before that ban is outlawed?  Does anyone else think we are screaming headlong into the presence of Skynet?  These little glasses might not look as threatening as Arnold's cyborg, but they are every bit as capable of knowing everything we say and do.  The future just got a lot more scary!

Psalm 31:20     "You shall hide them in the secret place of Your presence from the plots of man; You shall keep them secretly in a pavilion from the strife of tongues."