This Is Who We Are!

Last week I received a couple of emails that have been circulating around Texas the last week, because we take these things seriously.  I have related to you how Texas honored its hero, former Navy Seal Chris Kyle, after his unfortunate death.  But there were some important details about how the proud state of Texas took care of its own that you didn't hear about.  And it's time you did. 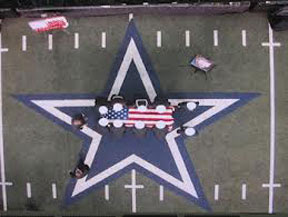 One email was from a member of the USO who attended the funeral service at Cowboys Stadium.  As she approached the site for the service, she saw long lines wrapping around the stadium.  The crowds were larger than expected.  But Jerry Jones, the owner of the Cowboys, offered free parking, sodas and water to all in attendance.  She attended the service with a friend of hers who wore his Army uniform, in honor of Chris's military service.  Officials at the stadium advised everyone in military uniform (and there were hundreds!) to join their brothers-in-arms on the field.  As the military service members made their way down on the field, everyone in attendance stood to honor them. It took over 45 minutes for them to be seated and not once did anyone sit down.  The stadium was silent in honor of our veterans.
Each branch of the military brought in a wreath and placed it in front of the casket, which even included one wreath from the Polish military. As one of Chris's teammates spoke, he asked all Frogmen (past and present) to stand during the reading of the SEAL creed. There must have been over 200 standing.
But the most moving of the two emails was from the mother of a fellow Navy Seal, one of Chris Kyle's teammates.  Her email was a little more personal and spoke of the love and honor bestowed on Chris's family and teammates during the funeral service.  And through her email, she wanted people to know about all the blessings that were bestowed on those closest to Chris.  This is how Texas honors its heroes:
Southwest Airlines flew in any SEAL and their family, from any airport they flew into, free of charge. The employees donated buddy passes and one flight attendant worked for 4 days without much of a break to see that it all happened. Volunteers were at both airports in Dallas to drive them to the hotel.
The Marriott Hotel reduced their rates to $45 a night and cleared the hotel for only SEALs and family.  The Midlothian, Texas Police Department paid the $45 a night for each room.  The Seal mom guessed there were about 200 people staying at the hotel, one hundred of them SEALs.  And the blessings kept coming....
Two large buses were chartered (an anonymous donor paid the bill) to transport people to the different events.  Rental cars were also donated.
The State Police and Secret Service were on duty 24 hours while the Seal families stayed at the hotel.  At the Kyle house, the Texas Department of Public Safety parked a large motor home in front to block the view from reporters, giving the family and friends the privacy they deserved.  It remained there the entire five days for the SEALs to congregate in, and allow for use of the restroom, so as not to disturb the family.  Chris Kyle's wife, Taya, their two small children, and both sets of parents were staying in the home.   Each day the home was full of people from the church as well as other family members that would come to help.
Nolan Ryan sent his cooking team, a huge grill and lots of steaks, chicken and hamburgers. They set up in the front yard and fed the Seals and 200 families all day long.  The next day a local BBQ restaurant set up a buffet in front of the house, and once again everyone was fed and well taken care of.  The family’s church kept those inside the house well fed. 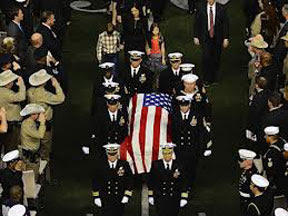 According to this SEAL's mother, Jerry Jones, the owner of the Cowboys, and the man everyone loves to hate, was a rock star.  He not only donated the parking and cold drinks to the public who attended the funeral service; he donated the use of Cowboy Stadium to the family.  That's who we are in Texas!  But the blessings didn't stop there .....
The SEAL mom reports that the next day was the 200-mile procession from Midlothian, Texas to Austin for burial in the State Cemetery.  I'll let her own words describe the emotions:  It was a cold, drizzly, windy day, but the people were out. We had dozens of police motorcycles riders, freedom riders, five chartered buses and lots of cars. You had to have a pass to be in the procession, and still it was huge. Two helicopters circled the procession with snipers sitting out the side door for protection. It was the longest funeral procession ever in the state of Texas. People were everywhere.
The entire route was shut down ahead of us, the people were lined up on the side of the road the entire way. Firemen down on one knee; police officers holding their hats over their hearts; children waving flags; veterans saluting as we went by... Every bridge had fire trucks with large flags displayed from their tall ladders....people all along the entire 200 miles standing in the cold weather. It was so heartwarming.
Each SEAL put his Trident on the top of Chris' casket one at a time. A lot of them hit it in with one blow. Derek (her son) was the only one to take four taps to put his in, and it was almost like he was caressing it as he did it. Another tearful moment.
After the service the governor's wife, Anita Perry, invited us to the governor's mansion. She stood at the door and greeted each of us individually and gave each of the SEALs a coin of Texas (she was a sincere, compassionate, and gracious hostess). We were able to tour the ground floor and then went into the garden for beverages and BBQ.
So many of the team guys said that after they get out they are moving to Texas. They remarked that they had never felt so much love and hospitality. The charter buses then took the guys to the airport to catch their returning flights. Derek just now called and after a 20-hour flight he is back in his spot, in a dangerous land on the other side of the world, protecting America.

This SEAL mom just wanted to share the emotional and blessed events of a tragic day.  And I wanted to share the heart and soul of Texas.  This is who we are!  We honor those who sacrifice for us and we go out of our way to give all we can.  I am still grieved that Chris Kyle's service and his heart for his fellow brothers-in-arms has not been acknowledged by the White House.  That is shameful!  But we here in Texas don't need an official pat on the back for one of our own.  The honor we paid Chris Kyle and his fellow SEALS was sincere and heartfelt.  The love that those SEALS felt was not a publicity stunt; it was genuine and honest.  In fact, if not for this mother's email, no one would have known of the generosity of so many.
You see, Chris Kyle was a true Son of Texas and a Child of God.  His faith allowed him to give of himself through his work on behalf of veterans with PTSD.  He did not do it for his own glory or reputation; it was done out of the goodness of his heart.  And the goodness of Texans surrounded his family and teammates during this emotional and heartbreaking time.  That's just who we are!

1 John 4:7    "Dear friends, let us love one another, for love comes from God. Everyone who loves has been born of God and knows God."