Is Colorado the Trial Run?

As I listened to a nationally-known talk show host rant about the insanity that is the Colorado State Legislature and their proposed bills on gun control, I realized that this country's demise is happening faster than anyone predicted.  When you have a state like Colorado, whose history is defined by rugged individualists and a Western mentality, pushing through foolish and ludicrous bills such as HB 1229 and SB 196, then the very fabric of this country is coming unraveled. 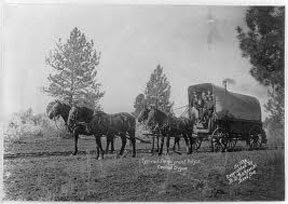 I say "Western mentality" because Colorado ain't the East Coast, folks!  It's the home of the Unsinkable Molly Brown, who survived the sinking of the Titantic.  It's earliest settlers were Spanish explorers, and many Coloradans are descendants of the rugged pioneers that crossed the Rocky Mountains to settle rich farmland and raise cattle.  Colorado is known for its harsh and rigorous mining industry and for its historical Indian wars.  It's establishment was hard-won and it's heritage was not characterized by sissies and sycophants.
So, I ask, somewhat incredulously ..... Colorado, what happened to you?  This is the state of my maternal ancestors, who were German and Swiss immigrants who crossed the prairies by covered wagons in the hopes of having a better life than they'd had in Europe.  I come from hardy stock; I've told you about my grandmother who was widowed with four small children under the age of 9, and pregnant with a fifth at the height of the Great Depression.  I've never known a more strong and independent woman.  I still have cousins who farm out on the Eastern prairies.  They are plain, hard-working people.  They don't ask for anything; except the chance to work their land without interference from anyone.  I hardly recognize this land that I was once so familiar with.
Who is behind this injudicious legislation?  What makes a legislator tell a woman who was violently raped for six hours that she could not have defended herself with a gun?  What makes him say that a proposed ban on firearms on college campuses is not about trying "to protect ourselves from violent crime. What we are trying to do here tonight is prevent students and teachers from feeling uncomfortable by you carrying a gun to protect yourself."  He went on to add that the rape victim's right to self-defense weighed less on the Senate Judiciary Committee's conscience than the right of the students and teachers to "feel comfortable". Where is the good sense God gave that man? Furthermore, this nonsense does not seem to fall along political party lines.  That was Republican state senator Ted Harvey who pronounced the rape victim a victim yet again; this time of insensitivity and absurdity.
But it doesn't stop there!  Colorado is the same state where lawmakers have proposed using ballpoint pens, rape whistles and safe zones as an alternative to people defending themselves with a gun. Additionally, the University of Colorado-Colorado Springs is advising women to urinate and vomit on their attackers.  Did some alien spaceship just come down from outer space and replace all the good people of Colorado?!?
So, I guess it should come as no surprise that there are seven gun control bills which are scheduled to be debated on the Colorado Senate floor this Friday.  Along with the Campus Concealed Carry ban, the bills include legislation such as House Bill 1224, that would ban high-capacity magazines of 15 rounds or more.  But perhaps the most controversial of the seven bills are HB 1229 and SB 196.  House Bill 1229 would require universal background checks for all gun purchases and transfers.  On one side of this argument was Shuttle Commander Mark Kelly, husband of Gabby Giffords, who was shot in Arizona.  He argued that he and his wife are gun owners, but feel it is time to block the loopholes in private sales background checks. He admitted that "the breadth and complexity of gun violence is great. But that is not an excuse for inaction." (Another "we just gotta do something argument!)
On the other end of the scale was a group of sheriffs, many from rural counties, who spoke against background checks.  This group of sheriffs, all in uniform, stood quietly behind their representative, who stated, “We know there are a lot of chiefs and line level police officers throughout the state who don’t support these bills.”  So now these LEOs must decide where they stand, Constitutionally, should these bills pass.

But it is SB 196 that disturbs me the most.  It is a controversial proposal that would make assault weapons manufacturers and retailers liable for crimes if committed by one of their firearms.  What is not quite clear to me is this:  would that make a private seller liable if a firearm he owns (or sells) is stolen?  This is carrying the whole litigious atmosphere a little too far!
Needless to say, these proposed gun laws have riled up a good portion of "The Centennial State's" populace.  Angry constituents have filled the halls of the State Senate since the hearings began and have loudly protested their displeasure.  But it's all been in vain.  And the threat by the CEO of Magpul Industries (a manufacturer of high-capacity magazines based in Colorado), to leave the state if the bill becomes law, seemed to have no effect.  "Making products that are illegal here in Colorado is counter to our values," said CEO Richard Fitzpatrick.  Magpul represents several hundred jobs and $85 million in sales; not enough to bankrupt Colorado, but what state wants to lose a profitable industry in this economic climate?  The fact that the departure of Magpul is no incentive to rethink these ludicrous bills shows the extent to which the Progressive ideology has run roughshod over public debate.
So the real question becomes this ..... If Colorado falls, what state will be next?  The speed and rapid pace with which this legislation was written and is in the process of being enacted scares the hell out of me.  It shows that there is a deliberate and conscious effort to limit our Constitutional access to firearms.   And there seems to be no deterrent in sight.  We can no longer trust our legislators to put the Constitution first and "feelings of uncomfortableness" second.  For the fine people of Colorado, it may be too late.  You got caught napping.
So this should be a signal for the rest of us to shore up our State Legislators.  There are those who would say the time has passed for laws and the ballot box to have any effect.  But remember this, our Founding Fathers did not make hasty and rash decisions.  They petitioned King George more times than he deserved, always with the hope that the tide of rebellion could be turned.  We will serve ourselves best if we mimic their resolve and their determination.  That doesn't mean we bend to a progressive doctrine; it means we fight for that which is morally right and justified.  We are not vague or unclear as to what that looks like, and we will not back down.  And may our Father in Heaven fight for us.

Deuteronomy 20:4     "For the Lord your God is the one who goes with you to fight for you against your enemies to give you victory."