A couple of days ago, Peace-Loving Warrior and I made a trip to San Antonio to visit with my sister and her friend, who had flown in from St. Louis for the weekend.  We'd agreed to meet at an outdoor cafe and spend a few hours enjoying the mild Texas weather.  The one thing you need to understand is that my sister is a hard-core Midwesterner, having lived nearly her entire life in that mixed-up state called Illinois.  It is the land of my birth, and the land of my forefathers.  I have a deep affection for it. 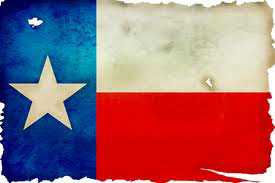 But, around my early high school years, I knew that I didn't belong there.  I couldn't explain it at the time, but I felt like I was being suffocated; like a square peg in a round hole.  I wasn't content to follow the same path as my classmates.  I wanted adventure and new experiences. College gave me the opportunity to explore my independence in the exhilarating state of Texas. Under the big open skies of the Lone Star state, I felt no limitations.  There, I found encouragement to take risks and I dared to dream of a life beyond the normal expectations.  It has been my experience that Midwesterners are more reserved and concrete in their thinking; in Texas, there are few boundaries and a free reign to reach for all that life has to offer.  Here, in Texas, we aren't apt to "settle" for anything less than complete autonomy.
I don't mean to stamp the entire state of Illinois with my childhood prejudices.  Looking back, I can see that God had another plan for me, even if that meant moving far from my family and friends.
Needless to say, my sister and I love each other, but our lives have taken separate paths.  I am very proud of her.  She is happily married to one of the kindest, gentlest men I have ever known.  Together, they have raised three fine boys, all of whom are pursuing careers in law enforcement.  She has beat breast cancer and went on to get her Master's degree in Education.  She has accomplished much that is worthy of praise.  But within my family sphere, PLW and I are known for our candid and passionate views; our unconventional lifestyle, and our lack of interest for the status quo.  Among most of my family members, it was expected that you would live in the same place you grew up; get a job in an area business; meet a nice boy and raise your family; and most certainly, never worry or take an interest in what politicians in Washington did.
So, as you can imagine, I'm the nonconformist in my family. You throw PLW into that mix, and we're "the wild and crazy aunt and uncle from Texas."  Therefore, it's always interesting when I get one of my midwestern siblings on my home turf.  (Yes, I've been in Texas now for over 40 years, so that qualifies me to claim it as my home).  My sister loves the smart-ass component of PLW, and had forewarned her friend, Diane, that there might be some verbal sparring when we met up.
After the first few minutes of introductions, we placed our order for a pitcher of prickly-pear margaritas and a variety of appetizers and settled in for an informal exchange of ideas.  It didn't take long for my sister to throw down the gauntlet.  "So, PLW .... are you packin'?"
My husband smiled and said, "Of course..... and so is your sister."  She looked at me, mildly surprised, and said, "Really?"  I just calmly pulled my purse from my side, and pointed to the concealed carry chamber in the side pocket, and replied, "I always keep it with me."  Now, I must tell you, that her oldest son is a lead investigator with the Illinois State police, her middle son is waiting to enter the Police Academy in St. Louis, and her youngest son is applying to the State police in Illinois, following in his big brother's footsteps.  So guns are not an offensive item to her.  She just doesn't see the need for one herself.
Those thoughts were echoed by her friend, Diane, who spoke right up.  "Why do you need a gun?" By the tone in her voice, I could tell she wasn't one of those anti-gun extremists; in fact, I could tell that she had never given any real thought as to why she might need a gun.
"First of all," I said, "I want to be able to protect myself in any threatening situation.  I simply do not believe that the police can get to me in time.  Secondly, it is my constitutional right to carry a gun."  On that point, I was glad to see that she agreed with me.  "Are you expecting to be in a dangerous situation?  What makes you think it is that bad?"  I instantly recognized the It will never happen to me attitude.  I'm pretty sure that the theater-goers in Aurora, CO and the parents of the Newtown students never thought it would happen to their loved ones either.  I told her that I never wanted to be in a defenseless situation, and the world is getting uglier.
We went on to discuss my thoughts on the importance of training, and my growing conviction that Concealed Carry Licenses should not be issued until holders of that license have received legitimate training on how to properly handle a weapon, as well as sufficient defense training.  By law, being able to pass a written test and hit a paper target from 3, 7 and 15 yards may qualify you to carry a defensive weapon, but it is my opinion that more training is necessary.  There is so much more that is required of you when you decide to start carrying that gun. 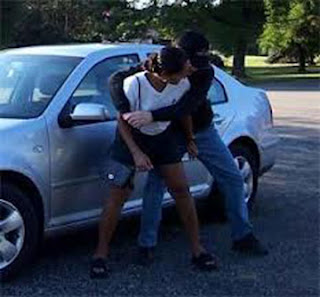 From that part of our conversation, she could see that I wasn't some raving gun fanatic.  I had given it a lot of thought and she knew why I had chosen to carry concealed.  Then Diane relayed an interesting story that had recently happened to her.  Having been a single mom, raising three boys, Diane had sacrificed for many years.  She had recently purchased a new Toyota Camry and had stopped to purchase gas, leaving her purse in the passenger seat.  Out of nowhere a young man ran up behind her, knocked her down and jumped into the driver's seat, attempting to drive off.  Diane jumped up, opened the door as he started down the street and then she grabbed, with both hands, onto the steering wheel.  The car-jacker kept driving, dragging her down the street as they fought for control of the vehicle.  He screamed at her to let go, but she refused, still being drug alongside the car.  She was screaming for help, and a crowd was beginning to notice the commotion.  Finally, the would-be car thief abandoned his crime, shoved past her and ran off.  Diane stopped the theft of her car and was lucky enough to come away from it with only a few scrapes and bruises.
I then asked her, "Where were the police?"  She said, "There wasn't time to call them.  They didn't arrive until over a half-hour later."  I asked her, "What if he had carried a gun?"  She replied, "I didn't even have time to think, I just reacted to protect my car."
I thought carefully how to present my argument to her.  "I'm sure you are aware of how incredibly lucky you were to survive that incident."  She nodded.  "Now, think about this.  What if your assailant had possessed a gun?  In my defensive handgun training classes, I have been taught to always be aware of your surroundings.  Hopefully, you would not be caught by surprise and he would not have been able to sneak up on you.
I think we can agree that if he had approached you from behind with a gun, you would have had no way to defend yourself; the police weren't coming -- you didn't even have time to call them."  She was an intelligent woman and I could see the wheels turning.  "It is my viewpoint that a good way to defend yourself in that situation is to be trained in self-defense using a handgun.  That doesn't mean you have to shoot someone.  It is my hope that I never have to fire my gun at anyone.  But if I am assaulted, it is an effective tool to keep an attack from happening, or in the worst case scenario, to save my life from an assailant with a gun."
To be honest with you, I don't think I convinced her.  She, like many Americans, think violence will never happen to them.  She wasn't anti-gun; I will give her that.  She just did not see how it could serve her to be trained to defend herself in such a manner.  I wish I could have made her understand that without such training and knowledge, then we are all victims.  This life is fleeting, but it is a blessing; and worthy of defense.   And whether force comes from a tyrannical government or a punk wanting to steal your car, you have a right to defend yourself -- a constitutional right and a moral right.  I will not surrender my chance at life to a lucky break (such as she experienced), or to the hope that someone will rescue me.  No!  I choose to be a responsible gun-owner, in charge of defending myself in a trustworthy and dependable manner.  The bad guys are not going away.  And they will always have access to guns.  So why not be prepared to defend yourself?   I will not become a victim!

Psalm 70:2     "May those who want to take my life be put to shame and confusion; may all who desire my ruin be turned back in disgrace."
Posted by Pam Kohler at 7:00 AM