The World Has A New Pope

I am pretty certain that there is no way to write this post without offending someone.  The Catholic faithful will see my remarks as blasphemous, and those who view the Catholic Church as Evil Incarnate will think I compromised.  It is not my goal to pronounce judgment on the Catholic Church; God will do that in His timing as He will all churches.  We will all have to stand before Him and hear Him recount what we did, or did not do, for Him. 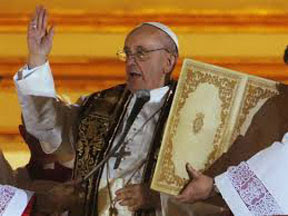 No, my objective today is to take a look at the issues this man, called Pope, brings to our conversation about faith.  I am not a religious scholar nor an educated theologian.  My faith is rather simple, really.   I derive my beliefs and understanding directly from the Word of God, rather than an established denomination or church affiliation.  I am, by no means, rejecting the doctrine of the Church.    During my life, I have been introduced to the specific doctrines of two different denominations, and agree with most of both of them.  But as I got older and began to see that the Church fell short in its commission from Christ, I became a seeker of knowledge on my own.  It is amazing how much you can learn about the character of God when you decide to go beyond "the official" position of your church leaders and seek to know Him personally!
Anyway, that being said, there is no church leader with more prominence than the Pope of the Roman Catholic Church.  His church sees him as an infallible leader, whose authority has been passed down a long line of Roman bishops from the very first one, Peter. Based upon the claim of an unbroken chain of Roman bishops, Roman Catholics teach that the Roman Catholic Church is the true church, and that all churches that do not accept the primacy of the pope have broken away from them, the original and one true church.  This belief was made quite apparent in the newly crowned Pope Francis I's first speech, when he said, "And now let us begin this journey, the bishop and people, this journey of the Church of Rome, which presides in charity over all the churches....".  He wasn't talking about just all the Roman Catholic Churches, but all the churches.
History shows us that the rise of the influence of the bishop of Rome was due, in large part, to the support of Constantine and the Roman emperors who followed him.  It was man who taught the primacy of the bishop of Rome, not God's Word.  That doesn't mean there have not been good (humanly speaking) and moral men who have served as pope of the Roman Catholic Church, including Pope John Paul II and Pope Benedict XVI, but any church teaching must be compared to Scripture.
And it will be interesting to see how this Pope converges his liberal beliefs in social justice with his conservative stances on gay marriage and abortion.  Known as a "reformer" in his home country of Argentina, Pope Francis I has his work cut out for him.  No one can deny that the scandals of child abuse have rocked the foundation of the Catholic Church and that church leaders have some serious reparations to make.  Secular liberals will be divided on his positions; they will applaud his viewpoint on charity and giving to the poor, while being disappointed that the Catholic Church "refuses to bend" on issues such as same-sex marriage.
For me, it always goes back to what God tells me in His Word.  The Bible clearly and consistently states that receiving Jesus Christ as Savior, by grace through faith, grants salvation (John 1:12; 3:16,18,36; Acts 16:31; Romans 10:9-10,13; Ephesians 2:8-9).  The official position of the Roman Catholic Church is that a person must believe in Jesus Christ AND be baptized AND receive the Eucharist along with the other sacraments AND obey the decrees of the Roman Catholic Church AND perform meritorious works AND not die with any mortal sins AND etc., etc., etc.  The world's Catholics, who number in the millions, have been faithful to their Church's doctrine for centuries and that is not likely to change.  But it will be interesting to see how the role of this man plays into world affairs as we progress towards the return of our Lord.
And if you really want to get off into the weeds, read Tom Horn's book, "Petrus Romanus", which describes the 12th century medieval prophecies of St. Malachy, who forecast the sequence of Popes, which included the prediction that Pope Benedict XVI would be the first pontiff in nearly 600 years to resign, and that his successor would be the last Pope before Jesus's return.  Now if that doesn't bring Pope Francis I's reign into perspective, I don't know what does!  No one can deny that these are interesting times in which we live!

Ephesians 2:8-9     For by grace you have been saved through faith, and that not of yourselves; it is the gift of God, not of works, lest anyone should boast.