The Effect of Anti-Gun Laws in Colorado

I have a feeling the Legislature of Colorado is going to regret their push for gun control laws.  Besides the obvious backlash from citizens who see their Second Amendment Rights being violated, the economic impact is sure to devastate The Centennial State.
Did anyone stop to think of the fiscal consequences to this state?  Besides vacationers who will now find themselves violating the law if they possess a high-capacity magazine or illegal firearm to defend themselves, you have have hunters that will no longer spend their dollars in Colorado, and major industries that will be forced to move to friendlier states.  The hunting industry alone brought $800 million into the state, according to the National Shooting Sports Foundation.  That's nothing to sneeze at! 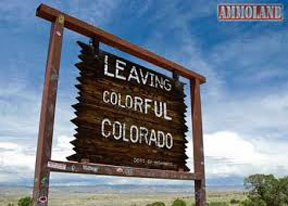 Then there is Magpul Industries, one of the giants in the firearms industry, which makes firearms parts and high-capacity magazines.  Magpul suddenly finds itself in the position of manufacturing goods that would be illegal in Colorado.  Not surprisingly, they have announced that they will be pulling out of Colorado "immediately".  Did anyone in Colorado stop to think about just what it will cost them when this multi-million dollar industry packs up and leaves?  Not to mention all the supporting businesses such as metal, tool and plastic companies?  Oh, wait, perhaps no one in Colorado did think about it!  Because you see it appears as if the Colorado gun laws were drafted by (surprise!) Michael Bloomberg and the Brady Center; backed by full-time Bloomberg lobbyists in Colorado, and supported by flown-in Bloomberg experts.  It was easy for these East Coast bureaucrats to dismiss the hundreds of thousands of Colorado residents that showed up to oppose the laws.  Once again, "We the People" don't figure into their equation.
But the effects haven't stopped there.  Michael Bane, Executive Producer of the Outdoor Channel, which includes such shows as Shooting Gallery, The Best Defense, Rapid Fire, Gun Stories, and other special projects, has moved production of his shows out of Colorado.  As he pointed out in his letter to the Colorado Legislature, it is the opinion of his attorneys "that these proposed laws are so dangerous to hunters and any other person, be they a fisherman or a skier who brings a handgun into the state for self-defense, that we cannot recommend hunting, fishing or visiting Colorado."
So besides the hunting and firearms industries, the tourist industry is going to be devastated.  I don't know about you, but I would be hesitant to travel through the state of Colorado with a legal firearm and  high capacity magazine that I bought in Texas, only to find out if I am stopped for any reason in Colorado, they could find probable cause to arrest me for violating the law until I could prove that such magazine was purchased prior to their cutoff date.  You are talking about possible confiscation of your car and firearms, not to mention attorney's fees to fight the case.  Nope!  We will be taking a wide path around Colorado!
I guess what scares me the most is the number of our Colorado friends that didn't see this coming.  I have to wonder if the Bloomberg machine swept in undercover, put all their minions in place, wrote the bills and then sprang it on an unsuspecting populace.  We have friends that didn't know this legislation was up for consideration until mere days before it was voted on; and others that didn't know about it until after the bills were passed.  If my hunch is correct, then all of us in Second Amendment supporting states need to be on guard against these wolves sneaking in the back door.
I'm also thinking that the Governor of Colorado and other legislators are second-guessing their rush to pass these bills.  The backlash and consequences were swift and decisive.  Major industries are pulling out and their lucrative tourist activity will be hit hard.  In effect, there has been a groundswell of grassroots response to these impulsive and rash pieces of gun legislation; a response that will impact not only the fragile Colorado economy, but shape the future and traditions of this once proud and free state.