The Veils Of Our Existence

You're going to need to put on your tin foil hat for this one!  Peace-loving Warrior handed me an article written in 2001 by Don Harkins, the Editor of the Idaho Observer.  Mr. Harkins passed away in 2009, but I was so intrigued with the thoughts expressed in his commentary, that I thought it worthy to bring for your consideration.
Like Don Harkins, PLW and myself can become frustrated with friends and family that are unable to see what we so often see clearly and objectively.  We think we are bringing sharp, focused arguments and examples that should wake them up and see what they term as our "conspiracy theories" for what they are .... truth borne by facts.  Why can we see the truth and they are unable?  Why is it obvious to us that there is a world system of Power-Elites that exploit and enslave the masses, yet they can't even contemplate such a network?  Is it as simple as they don't want to see it?
Mr. Harkins developed a theory of his own that I believe could have some validity.  He conjectures that the masses don't see it because the Power-Elites have cleverly developed a virtual pasture so green that few people seldom, if ever, bother to look up from where they are grazing to notice that they are being led over the cliff. 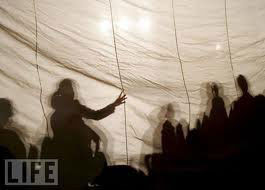 So what makes us different than the rest of the sheep?  Harkins asks us to imagine that there are veils over our existence; eight to be exact.  In order to progress to a higher understanding of just how we are to maneuver through this existence, we must be able to pierce each successive veil.  Stick with me, here.  It's about to get real interesting.
The First Veil = Politics.  There are over 7 billion people on the planet.  Most of them will live and die without seriously thinking about anything other than what it takes to live and breathe for one more day.  That means that 90% of all humanity will live behind this first veil and never pierce it.  That leaves 10% of us who will vote, be active in our societies and have an opinion.  Our opinions are often shaped by government officials, MSM or other "experts" who claim to be voices of authority.  But of those with an opinion, 90% will never really think for themselves and will adopt the opinion of others, while 10% will pierce the second veil and move forward in their thinking.
The Second Veil = History.  There will be 10% of us who will explore the world of history, the relationship between man and government, which will lead to the meaning of self-government through constitutional and common law.  Ninety percent of this group will live and die without going on to pierce the third veil.
The Third Veil = Resources of the World.  Of the group that pierces this veil, 10% of us will come to realize that the masses are controlled by extremely wealthy and powerful families whose old world assets have been manipulated to become the foundation upon which the world's economy is currently indebted.  (Think Rothschilds, Rockefellers, Vanderbilts, the Royal Monarchs).  But sadly, 90% of this group will never pierce the fourth veil.
Get ready to tighten down your tin foil hat!  The Fourth Veil = The Illuminati, Freemasonry and other secret societies.  There are 10% of us that recognize these societies use symbols and perform ceremonies that transfer mysterious knowledge that is used to keep us ordinary people in political, economic and spiritual bondage to the oldest bloodlines on earth.  This has been seen frequently at Super Bowl halftime shows (Beyonce flashing "the Rockefeller" sign; Madonna sporting symbols of the occult) and during the Grammy's (Nikki Minaj's ode to "Roman", the demon whom she says possesses her).  Just check out the Youtube videos for each of these demonstrations!  But once again, 90% of those who have reached this level of understanding, will never pierce the fifth veil.
The Fifth Veil = Technological advances by these Secret Societies. I may lose some of you at this point, but I urge you to do your own research and study the Bible in depth.  There are hints of the knowledge behind this fifth veil, but you have to be willing to connect the dots.  There are 10% who make it this far in their understanding who learn that the secret societies are so far advanced technologically that they are able to do things that were considered science fiction just decades ago.  The inventions of Ray Kurzweil and his prediction of "man's singularity with computers" is an example of such advanced technology.  But what's interesting is that this technology is actually ancient, and compares to what Nimrod was trying to accomplish at the Tower of Babel; namely to become like God.    Are we getting dangerously close to that concept again?  Nearly 90% will never get beyond this understanding to the sixth veil. 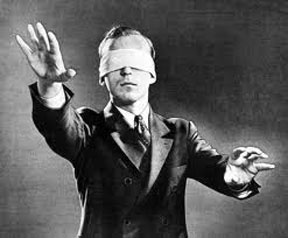 The Sixth Veil = Aliens and Monsters may be real.  It is going to take a huge leap for the 10% who get to this level of understanding.  But if you study your Bible closely, you will see mention of fallen angels mating with earthly women to give birth to Nephalim (Giants) (Genesis 6:4 and 2 Samuel 21:20, for example).  There are many modern-day Biblical scholars who are prepared to say that the minotaurs of old and the UFO and alien sightings of today are evidence of these fallen angels.
If you are able to go beyond an unwillingness or inability to believe the concepts behind the sixth veil, then perhaps what waits for us behind The Seventh Veil = Peace of the Lord.  It's hard to imagine, but I can foresee a small group of people whose soul is so evolved that they can exist on this earth, yet be unafraid of the evil that abounds in this realm.  The only way I can describe it is to have such peace from God that you are unafraid of death.
That brings us to Harkins's Eighth veil, which can only be the pure energy, authority and life force that is God.  We can only hope to tap into that Power, and I think the closest we can come to that is to seek a personal, intimate relationship with the One True God, the Ruler of the Universe and abide in Him.
So, as you can see, with each veil of understanding that is pierced, the number of people "who see" gets exponentially smaller.  The majority of the world's population is what the alternative media calls "the low information voter", and they are seduced by the modern Babylonian culture.  And you can understand that a person who may have pierced the fifth or sixth veil will be seen as crazy by those who haven't tried!
I will concede that Mr. Harkin's theory will be labeled as far-fetched and absurd, but the basis of it is at least reasonable.  The majority of the people on the planet are useful idiots; tools of the state.  They are gullible citizens who give no thought to their votes for politicians who are willing to sacrifice the lives of the innocent masses to further the greed of the Power-Elites.
It's a long road to progress through these veils, but if you are one that finds yourself frustrated because others don't see as you do .... then perhaps you now have a better idea as to why they can't see and why you are seen as a "conspiracy nut."  And if you are just beginning to awaken, then I hope you can see that living, breathing and thinking are just the beginning to greater understanding.  And finally, for all of us, we should understand that the greatest adventure of our life is just behind the next veil, because it is one less obstacle between us and God.

2 Corinthians 3:16-17      "Nevertheless when one turns to the Lord, the veil is taken away.  Now the Lord is the Spirit; and where the Spirit of the Lord is, there is liberty."