Christianity and The Culture

The last couple of days the U.S. Supreme Court has been hearing oral arguments on the constitutionality of gay marriage.  Along with the issue of abortion, gay marriage will be the defining conflict of our culture.  As a Christian, it is not hard for me to know where I stand on them.  The issue of abortion is clear-cut.  I believe in the sanctity of life from the moment of conception.  And my God has made it clear in His Word how He feels about the sacrifice of children.  Period. End of discussion. 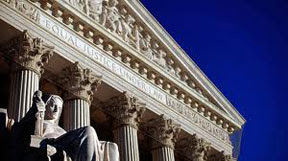 While I also believe that His Word is explicit and straightforward on the subject of marriage, there are those who attempt to use the emotion of love to justify a relationship that God has not sanctioned.  Genesis 2:24 very clearly defines how God designed his plan for marriage: Therefore a man shall leave his father and mother and be joined to his wife, and they shall become one flesh.  That is the ideal relationship; the only one God defines, and that definition has been upheld and sufficient for thousands of years.
I will not deny that homosexuality has existed throughout history as well; nor that legitimate and committed homosexual relationships can and do prevail.  But the fact that our current culture wants to legally sanction those relationships as "marriage" does not mean they should be so.
As a Bible-believing Christian, I put God's principles above man's desires or laws.  And I thought I could make the belief in God a litmus test, if you will, for which side of the debate one might fall.  But many who place themselves under the "Christian" banner are now distorting God's Word in order to adapt to this culture.  And this greatly disturbs me.
One such Pastor of the modern Church is Rob Bell.  He is a disciple of Marcus Borg, the primary leader of the Emerging Church movement.  PLW and I ran up against what we felt were the heretical teachings of this movement about two years ago, and it caused us to leave a church we had attended for 20 years.  In case you are unfamiliar with the Emerging Church, they believe that much of the Bible is outdated and belongs to the "old paradigm" of traditional belief.  They want to adapt the meaning of Scripture to fit an "emerging culture" of tolerance and inclusiveness.  Of course, that produces a sliding scale of acceptance for sins that were once denounced by the Church.  Let me give you a couple of statements from Mr. Borg:


“I would argue that the truth of Easter does not depend on whether there was an empty tomb, or whether anything happened to the body (corpse) of Jesus…. I do not see the Christian tradition as exclusively true, or the Bible as the unique and infallible revelation of God… It makes no historical sense to say “Jesus was killed for the sins of the world.”
I am one of those Christians who does not believe in the virgin birth, nor in the Star of Bethlehem, nor in the journeys of the Wisemen, nor in the shepherds as facts of history….” Marcus Borg; 1992 Jesus Seminar.


“I let go of the notion that the Bible is a divine product.  It is a human cultural product, the product of two ancient communities, biblical Israel and early Christianity.  As such it contained their understanding and affirmations, not statements coming directly or somewhat directly from God… I realized that whatever “divine revelation” and the “inspiration of the Bible” meant (if they mean anything), they did not mean that the Bible was a divine product with divine authority."  Marcus Borg, The God We Never Knew

Get the picture?  That's why it was extremely upsetting to see his pupil, Rob Bell, publicly proclaim that "I believe God [is] pulling us ahead into greater and greater affirmation and acceptance of our gay brothers and sisters and pastors and friends and neighbors and coworkers .... I am for fidelity. I am for love, whether it's a man and a woman, a woman and a woman, a man and a man. I think the ship has sailed and I think that the church needs to just … this is the world that we are living in and we need to affirm people wherever they are."
The problem with that statement is it has no semblance of what the God of the Bible called His Church to do.  God never said the Church should conform to the world.  As disciples of Jesus Christ, we are to "teach them to observe all things that I have commanded you." The world is to turn towards Christ.  It breaks my heart to hear a pastor proclaim that Christ's Church is to embrace the world.
Bell sees the internet as a positive tool in helping Christians to suddenly become exposed to thousands of different viewpoints, so that "you can call your own [beliefs] into question and then experience a refining fire dimension and realize that 'wow, I've been living with a bunch of views and perspectives that don't actually work and don't actually bring life."  Couple this line of thinking along with his latest book, titled Love Wins, in which he challenges the traditional teachings of a literal, eternal hell and belief in Jesus Christ as a prerequisite for heaven, and you can see the destructive paths down which leaders like him can take our impressionable youth. 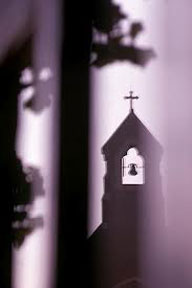 So now we have so-called "Christian" leaders who are asking Believers to just get in line with the culture.  We are told, "Celebrate diversity; Allah and Jehovah are just two sides of the same God; and the Church has become too narrow in its views and too exclusive."  The truth is that the Church is being corrupted from within, and the Bible is being reduced to a collection of man-made stories with fairy-tale morals.  You can see how Bell could preach that "The old ways of things don't work anymore."
The bottom line is this:  Christians need to know what they believe.  You should never have to compromise or "adapt" to the culture.  Jesus very clearly said,  “Enter by the narrow gate; for wide is the gate and broad is the way that leads to destruction, and there are many who go in by it.  Because narrow is the gate and difficult is the way which leads to life, and there are few who find it. Beware of false prophets, who come to you in sheep’s clothing, but inwardly they are ravenous wolves." (Matthew 7:13-15).
It is our Culture that is leading us down the "broad" path towards acceptance of Biblical sin.  And that road of destruction has led right to the doors of the Supreme Court.  Will the nine Justices rule in favor of a national mandate for same-sex marriage? Will they endorse a law that conforms to a defiant and rebellious culture?  If so, we Christians who follow the commandments of Jesus, as stated in His Holy Scripture, will have a spiritual struggle ahead of us.  How do we protect the next generation from losing its moral bearings?   How will we challenge the world to live up to the standards of the Lord?
For me, I will turn to that hero of the Bible, Daniel, who while in captivity in Babylon, never submitted to the pagan rituals or beliefs of the culture in which he lived.  He stayed true to the commandments and precepts of his Lord, and refused to compromise or make concessions.  I fear that we will all soon be tested as Daniel was.  May we be found as faithful and dedicated.

Matthew 7:21-23      Not everyone who says to Me, ‘Lord, Lord,’ shall enter the kingdom of heaven, but he who does the will of My Father in heaven. Many will say to Me in that day, ‘Lord, Lord, have we not prophesied in Your name, cast out demons in Your name, and done many wonders in Your name?’ And then I will declare to them, ‘I never knew you; depart from Me, you who practice lawlessness!’