That's Only Part Of The Story

Last evening, at sundown, the Jewish celebration of Passover began.  I am always moved at the history and tradition associated with this eight-day festival which commemorates the Exodus of the Jewish people from their bondage and slavery in Egypt.  I am touched by the fulfillment of the biblical obligation to recount the story of freedom to each generation, so that none will forget God's commitment to His people.
As you will recall, the Israelites were instructed to paint their doorposts with the blood of a sacrificial lamb, so that their firstborn might be saved as the Spirit of the Lord visited death upon the Egyptians.  This final plague resulted in Pharaoh releasing the Israelites, and the subsequent founding of a new nation under the leadership of Moses.  They eventually resided in the land promised to their forefather, Abraham. 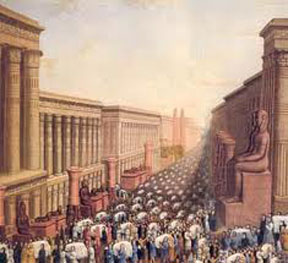 So it was not lost on me that our President referred to this historic event during his visit to Israel in the past week.  "More than 3,000 years ago, the Jewish people lived here, tended the land here, prayed to God here and after centuries of exile and persecution, unparalleled in the history of man, the founding of the Jewish State of Israel was a rebirth, a redemption unlike any in history."  He went on to say, "Today, the sons of Abraham and the daughters of Sarah are fulfilling the dream of the ages – to be masters of their own fate in their own sovereign state."
OK, here's where you have to be on your toes and really pray for discernment.  These statements sound all warm and fuzzy and, on the surface, appear to be conciliatory towards our Israeli allies --- a stance that's not exactly been at the forefront of Obama's foreign policy.  While some reporters are willing to go as far as saying he "quoted Scripture", neither of the above-mentioned statements are accurate Bible quotations.
Furthermore, "the sons of Abraham" and "the daughters of Sarah" is a rather broad description to apply to inhabitants of Israel, since both Muslims and Christians consider themselves as the spiritual offspring of Abraham.  And if I may be so bold, I doubt that religious Jews would declare themselves to be "masters of their own fate".  It is God's sovereignty and guardianship that has always been at the foundation of the Jewish faith.  And if you want to really get off in the weeds, that last statement could just as easily refer to Palestinians as to Israelis.  The emergence of a Palestinian state is also at the center of this visit, as the President meets with other Middle East leaders.
From all reports, the rulers of the United States and Israel seemed to forge a more agreeable union than they have in the past, although no one will go so far as to say the President's visit to the region will ease the tensions or lead to any serious peace talks.  But I am nonetheless concerned that his "Bible-like quotes" be accepted as Scripture.  The Word of God is sacred and not to be mimicked or mocked.  One should not use words that resemble or imitate the Bible and think that it justifies an opinion or policy.   For God is the ultimate authority who will decide the outcome of the nations in the Middle East, just as He determined the outcome between Egypt and the Israelites, all those Passovers ago.
But the reality is that we cannot do without rulers and governments. Diplomacy and compromise are necessary for nations to coexist.  So it was significant when Israeli Ambassador to the U.S. Michael Oren said, in regards to Passover, "we are urged to remember that we were once slaves in Egypt and that accordingly, we should act with humility and show civility to the strangers dwelling among us."  But equally important was this statement by Oren:  "During the Seder we are also told to remember that in every generation forces arise seeking our destruction."
These two ordinances of remembrance are especially poignant this Passover.  What the Israelites of today experience is no different than what their ancestors faced throughout history.  They must be ever vigilant and strong in the face of multiple threats, while upholding their commitment to peace and declaring their determination to defend themselves.  May this Passover holiday be memorialized as one of peace and strength.

Isaiah 31:5     Like birds flying about, So will the Lord of hosts defend Jerusalem. Defending, He will also deliver it; Passing over, He will preserve it.