He was just a blip on the radar screen last week, not worthy of any serious coverage by the MSM.  But South Carolina Representative Trey Gowdy took the Director of U.S. Immigration and Customs Enforcement (ICE) to the woodshed.
During a House Judiciary Committee hearing, Representative Gowdy grilled John Morton and DHS officials about the release of thousands of illegal immigrants from detention, including Level I violators (aggravated felons).   It should come as no surprise that the White House and its minions have claimed that sequestration forced them to release the detainees.  Representative Gowdy wasn't going to let them off that easy. 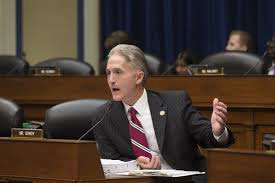 TheBlaze.com reported the following exchange between Gowdy and Morton:  “What is a Level I violator?” Gowdy asked Morton.
“First, obviously I disagree about your characterization about these being–” Morton began.
“That’s fine. You can use your time to disagree with my characterization, don’t use mine. What is a Level I violator,” Gowdy shot back.
Morton explained Level I violators are “aggravated felons.” He added that eight Level I violators were released, but after faulty computer records and a “mistake,” four were put back into detention.
“If it’s $122 a day to house four Level I aggravated felons, then releasing them saves you, what, about $600 a day?” Gowdy pressed. “You can’t find $600 anywhere else in your budget?” He did not get a straight answer to the question.
When you watch the video, it is apparent from the number of times Director Morton reaches for his glass of water that he wishes he was anywhere but in that hot seat.
So just who is this attack dog for the people?  Trey Gowdy is a 1986 graduate of Baylor University and received his law degree from the University of South Carolina School of Law in 1989.  After serving as a Federal Prosecutor, he served his home state of South Carolina as 7th Circuit Solicitor, and was re-elected twice to that position.  When the state faced a budget crunch that forced many employees to go on unpaid furloughs, Gowdy funneled part of his campaign account into the solicitor's budget so his staff could keep working.
He then switched his sights to the U.S. Congress, where he has was part of the 2010 Republican take-back.  Gowdy considers himself to be a constitutional conservative. In August 2011 during the 2011 United States debt ceiling crisis, Gowdy opposed Speaker John Boehner’s debt limit bill, and he voted against the final debt ceiling agreement.  In December 2011, he told Congressional Quarterly that he will only support a measure if its sponsor can demonstrate that the Constitution gives the government the power to act in a particular realm.  So, I applaud the fact that he isn't a "party apologizer", and he's not afraid to go against the political grain if the Constitution is in jeopardy.
Gowdy also considers himself "pro-life plus", meaning that he believes "in the sanctity of life" and that "the strategy should be broader than waiting for the Supreme Court to revisit Roe v. Wade."  Sounds like he knows we can't count on the highest Court in the land to do the right thing, or make a decision based on the Constitution. 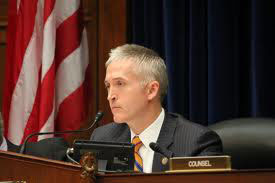 Wikipedia reports that Gowdy received an "F" from the supposedly Middle Class Advocacy Groups, such as Voter Punch and the Campaign for America's Future.  When I looked into his voting record, it quickly became apparent that these "advocacy groups" for the middle class, are nothing more than progressive groups that want the government to take care of the middle class.  He voted to repeal ObamaCare; voted for the Small Business Tax Cut Act; he voted against the Cap and Trade Act; he voted to put the Gulf of Mexico back to work for the U.S.; and he voted to terminate President Obama's  Offshore Moratorium Act..... are you getting the picture?  These middle class advocacy groups gave Representative Gowdy a score of 7, while giving Representative James Clyburn a 77.  That tells the whole story.  His low score tells me that he is willing to vote his conscience, and with the Constitution, over guaranteeing a favorable score from politically biased groups.
But back to the people's business .... in continuing his questioning of ICE Director Morton, Gowdy accused their actions of being part of a political campaign which conjured up "fictional" effects of sequestration.  He pushed a further line of questioning to find out if Secretary of Homeland Security Janet Napolitano was aware of the release of Level 1 aggravated felons.  Morton argued that to the best of his knowledge, Homeland Security Secretary Janet Napolitano was not part of the decision to release the illegal immigrants.
Gowdy pounced:  “If the release of aggravated felons does not rise to the level of something that the secretary of the Department of Homeland Security should know about, what does rise to that level?”  He never let up.  I could go on and on about the intensity and the sincerity of the Representative's questioning.  But it's best appreciated when witnessed for yourself.  Watch the video!
I guess it's a sad state of affairs, when a U.S. Congressman who is doing the job he was elected to do, stands out above the crowd.  And we are that desperate for heroes!  PLW, being the cynical realist that he is, acknowledges that men like Trey Gowdy, Ted Cruz, and Rand Paul are among "the good guys", but doubts they can make any real difference.  Since I am the idealistic, romanticist in the family I want to hope that they can!
So, if you find that you have a few spare minutes in your day, why not consider calling Representative Gowdy's office and letting his secretary know that you appreciate what he is doing to safeguard our Constitution, our rights and our country.  It can't be easy being a David against a Goliath, called the Federal Government.  You never know when a word of encouragement from "the people" will be just what they need to keep up the fight.  And pray for them.  There is no greater source of strength and power than our Lord.


Isaiah 5:13     Therefore my people have gone into captivity, because they have no knowledge; Their honorable men are famished, And their multitude dried up with thirst.