By the time you read this post, Senator Chuck Hagel will have undergone a day of confirmation hearings on Capitol Hill.  I have to say that I have become increasingly skeptical of these sideshows.  They seem to be all about image.  Some Senator will aggressively question the nominee; seeming to put him in the hot seat.  Some of the questions are even direct and call into question the nominee's true agenda.  Yet nothing ever happens, and nothing changes.  Is it all for show? 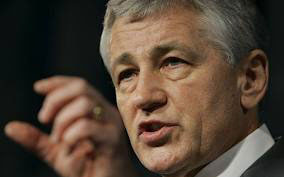 In the case of Senator Hagel there is much to be concerned in regards to his nomination for Secretary of Defense.  I would venture that most Americans give little pause to the duties of this most important position in our government.  So let me enlighten all of us.
The Secretary of Defense is in the chain of command and exercises command and control, subject only to the orders of the President, over all Department of Defense forces (the Army, Navy, Air Force, and Marine Corps) for both operational and administrative purposes.  Furthermore, because the Office of Secretary of Defense is vested with legal powers which exceeds those of any commissioned officer, and is second only to the Office of President in the military hierarchy, it has sometimes unofficially been referred to as a de facto "deputy commander-in-chief".  Now do you see why we should all be concerned as to who holds this influential office?
If you have been paying attention at all, you know that there is much controversy about this appointment.  In my mind, there are many concerns about this nomination; everything from his support of Defense budget cuts and a "pared down Pentagon", to his Vietnam-era mindset (much like Senator Kerry's) that we need to approach war in a less militaristic posture.  (I would like to remind him that the world has waged war since the beginning of time, and the object should always be to WIN!)  But I digress.
For me and my Biblical worldview, the most important issues concerning Senator Hagel's nomination are the many contentious statements he has made in the past about both Iran and Israel.  No matter which side of the political fence you reside, his positions should be important to you.  He is on record for opposing sanctions against Iran, instead supporting the current administration's policy of "reaching out" to regimes that have openly endorsed such terrorist groups as Hamas and Hezbollah.  At the same time, he has avowed that, "I've never voted against Israel ever in the 12 years I was in the Senate."  That's a rather misleading statement, and partisan politics aside, I'd like to point out that his fellow Republican, Senator Rick Santorum, would disagree.
Having served in the Senate together and shared the same assignment on the Committee on Banking, Housing and Urban Affairs, I would contend that we should give a listen to Santorum's resignations about this nomination.  Perhaps most disturbing to me were the allegations that throughout the 2000s Hagel was a frequent speaker for the American-Iranian Council, the regime’s lobby in the U.S.  Indeed, in 2006, the Council on American-Islamic Relations (CAIR) praised the possibility of Senator Hagel running for the 2008 Presidential nomination.  In addition to these bits of interesting information, Santorum reports that in 2007, Senator Hagel voted against an important amendment to the Defense Authorization Bill that would label the Iranian Revolutionary Guards Corps (IRGC) a terrorist organization. This came at a time when it was clear that the IRGC was providing weapons, training, and financing to those killing Americans in Iraq and Afghanistan.
But perhaps more revealing than the instances of Hagel never voting against Israel, are the times he chose not to vote for Israel.  As pointed out on the Breitbart website, that is where Hagel’s record is at its worst. With a few exceptions, Hagel opted not to co-sponsor or sign onto straightforward statements supporting Israel.  For instance, he refused to co-sign a letter to President Bill Clinton in October 2000 expressing solidarity with Israel as it absorbed the violence and shock of a new Palestinian intifada.  He also refused to sign a letter initiated by then-Sen. Joe Biden calling for a re-evaluation of relations with the Palestinian Authority.  Now, he claims that neither of these solutions would have solved the problem.  Therefore, he considers these criticisms moot.  Sometimes what you don't do, speaks to your belief system more than what you actually do.  Perhaps he subscribes to the same philosophy as our current Secretary of State:  What difference does it make?
Well, let me tell you, Senator Hagel, it DOES matter!  Your decision to co-sign a letter to President-elect Obama during the Gaza War of 2008-9, urging him to seek dialogue with Hamas, even as the Palestinian terror group was raining rockets into Israel, tells me a lot about how you will deal with the Middle East, should you be confirmed.  And it doesn't bode well for Israel.  The fact that you would approve, promote and seek such conciliatory measures greatly concerns me.  And I would like to remind you that the God of Israel will not take kindly to any nation that denies Israel's right to exist.
You may subscribe to a "kinder, gentler" America; one that isolates itself from the issues in the Middle East.  But, I contend, sir, that world events will neither allow us nor recognize our "cooperation".  You cannot be all things to all people. You must choose a side.  The one true God in Heaven is in control, and He demands that the nations side with Him.  Pray for America's leaders to make the right decision!

Psalm 66:7    "He rules forever by his power, his eyes watch the nations— let not the rebellious rise up against him."