Get Ready! A Cashless Society Is Close At Hand

The headlines seem to come more often and from varied sources.  Bloomberg Businessweek featured this headline: Bill Gates Hates Cash. Here's Why.  Or how about this one?  Cashless Society and Fingerprint Payments on the Horizon.  This headline appeared in an article from Africa's Mail & Guardian.  I know what you're thinking .... I am, too.  Revelation 13:17 comes easily to mind: ... "they could not buy or sell unless they had the mark...". 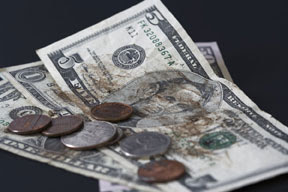 The reasons for promoting this new technology are always presented as positive and forward-thinking.  In Bill Gates' case, we all know that his desire comes from his deeply-held humanitarian beliefs, right?  Excuse me, while I control my gag reflex.  You see, he is mainly concerned that those on the low end of the economic spectrum --- the poor and unbanked (get ready to hear that term a lot!) ---- are made to feel ostracized and left out of the system.  If we could just create a money system that made everyone feel, well .... equal .... then poor Mr. Gates could sleep at night.
To that end, he and his wife Melinda helped finance the Better Than Cash Alliance, whose goal is to accelerate the shift from cash to electronic payments.  This would include disbursements of salaries, payments to suppliers, pensions, social welfare stipends, cash-for-work programs, emergency relief payments, and others forms of payments by governments and development communities.  It sounds like another way to control people and restrain personal liberties to me.
Of course, the official goals of the Alliance are stated as: 1) Less corruption and theft; payments can be easily tracked.  2) Security; the money gets where it’s supposed to go.  3)  Inclusion for the poverty-stricken; Unbanked people can establish a record, or credit, and be able to qualify for future loans.  4) Less costly; moving "electronic" money is cheaper than moving physical cash.  5)  Access to new markets; This benefit is mainly for providers of financial services (and coincidentally, creates a whole new class of indentured slaves to the Wealthy Elite who will control this new monetary "system".)
So e-payments will soon become the mandated form of monetary transferral and your hard-earned money will only exist in the cloud.  But that's not the only method that's on the horizon.  The South Dakota School of Mines & Technology has partnered with Nexus to come up with a biometric program.  Biometric identifiers are the distinctive, measurable characteristics used to label and describe individuals, and could be used not only as a form of identification, but of access control. 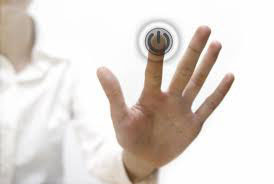 The patented technology, which is being developed, would turn each finger scan into a series of valueless numbers that change every time the finger is introduced before a scanner.  To get even more detailed, this technology goes beyond a fingerprint to read multiple layers into the skin and detect hemoglobin in the blood.  Now that's getting pretty darned specific!
Here's how it works:  Consumers deposit money into an account, with which they associate their biometric data.  Consumers would then pay for goods with a simple scan of the finger; no cash, credit, debit or ID cards or pin codes necessary.  All the obvious benefits are touted:  convenience, security, speed of transactions, etc.
But it still screams of invasion of privacy to me.  I'm afraid that, as a society, we have bought into "the latest technology" mindset hook, line and sinker.  Less than 20 years ago, it took a computer the size of a large microwave, a scanner, a Selectric typewriter, a push-button phone, a bulky camera, and an alarm clock to do all that one Android phone the size of a deck of cards can do by itself.  We have been told that it was all for our own good; it was inclusive, convenient, faster and needed.  But now we no longer even hear each other's voices when we communicate.  It almost feels as if the Powers That Be have succeeded in molding us into compliant little robots that create their super-wealth.  We have forgotten to think for ourselves because a machine does it for us.  We have abdicated our responsibilities as consumers and free-thinking citizens to "systems" that know better than we do what is best for us and our families.
And then there is that whole warning in the Book of Revelation.  It is not clearly defined what the "mark" will be, but it involves buying and selling, and these new technologies seem to be coming ever closer to fulfilling that prophecy.  Stay alert, my friends, and know what you're signing up for!

Proverbs 14:8     "The wisdom of the prudent is to give thought to their ways, but the folly of fools is deception."

Email ThisBlogThis!Share to TwitterShare to FacebookShare to Pinterest
Labels: Economic News, Our Culture.